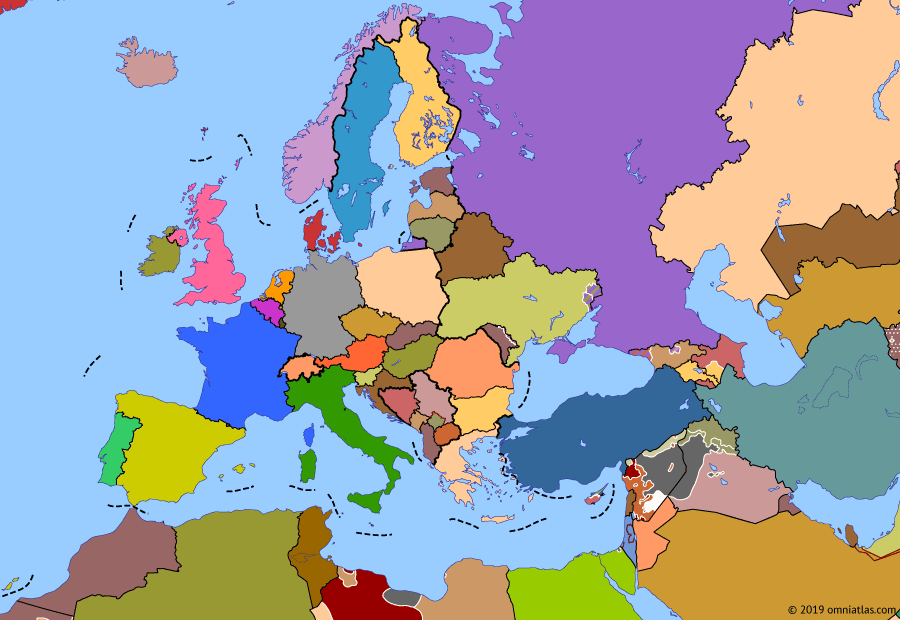 Although the US and its allies moved to support Iraq against Daesh (ISIL/IS), the situation in Syria was more complicated. There a deeply divided rebellion had been attempting to oust the unpopular President Bashar al-Assad since 2011. Assad was supported by Russia and Iran, but while the West generally opposed him, any weakening of his position tended to strengthen the even more objectionable Daesh.

In late 2014 and into 2015 an increasing number of refugees and migrants arrived in the European Union via the Mediterranean Sea and Southeast Europe to apply for asylum, with over 1.3 million entering the continent by the end of 2016. The majority came from Syria, with Afghanistan, Iraq, Nigeria, Pakistan, and Eritrea also highly represented. Although the numbers involved represented only a fraction of the total refugees displaced within Africa and Southwest Asia, their arrival in the relatively affluent countries of Europe helped spark a resurgence in nationalism and right-wing populism in the region. in wikipedia

Abu al-Baraa el-Azdi, leader of Daesh (the Islamic State in Iraq and al-Sham), released an audio-recording in which he accepted pledges of allegiance from supporters in five countries, including Libya. A number of militant Islamic groups across the country took up the Daesh’s Black Standard, using the city of Sirte as their main base.in wikipedia

On 29 May 2014, Belarus, Kazakhstan, and Russia signed the Treaty on the Eurasian Economic Union (EAEU), creating a single economic market, with Armenia and Kyrgyzstan joining later that year. The EAEU would succeed the Eurasian Economic Community (2000-2014), coming into effect on 1 January 2015.in wikipedia

After talks between the leaders of Ukraine, Russia, France, and Germany at Minsk, Belarus, an immediate and full ceasefire came into effect in particular districts of Donetsk and Luhansk oblasts of Ukraine. This largely brought an end to fighting in the Donbass War, although there were still occasional skirmishes over the following two years.in wikipedia

Greek Prime Minister Alexis Tsipras, leader of the left-wing Syriza party, held a referendum over whether to accept the bailout conditions proposed by the European Commission, the International Monetary Fund, and the European Central Bank to manage the Greek government-debt crisis. The result was a 61% to 39% rejection of the bailout conditions. On the 13th, the Greek government accepted a milder bailout package.in wikipedia

After a formal request from the Syrian government, the Russian Federation began a military intervention in the Syrian Civil War by mounting air strikes in areas around the cities of Homs and Hama. The United States and Saudi Arabia disputed Russian allegations that the strikes were directed only against Daesh (ISIL) positions, claiming that moderate Syrian opposition forces were being hit.in wikipedia