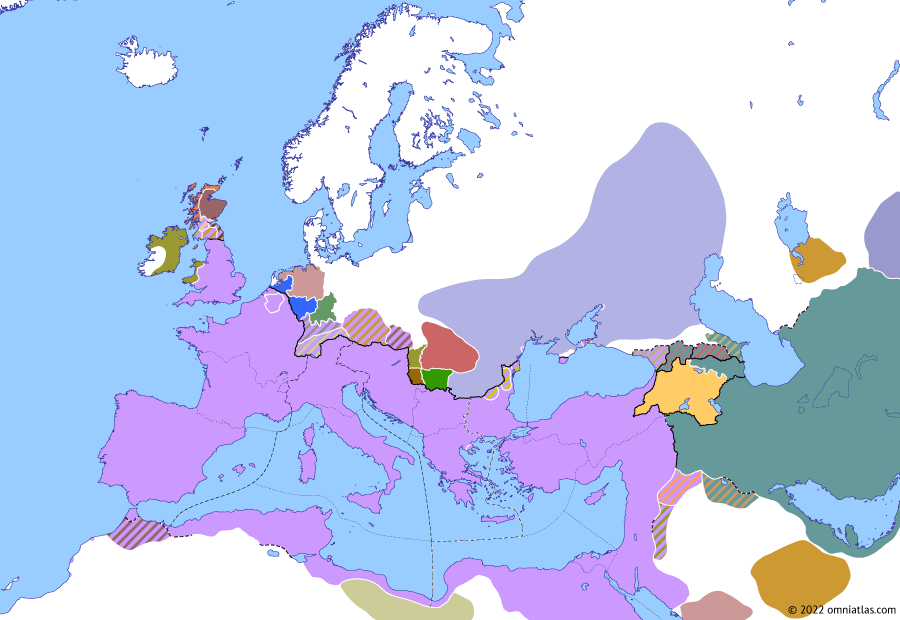 379Gratian repulses
invaders on
the Rhine

Although Theodosius’ restored eastern Roman army was routed by the Goths in 380, the Romans eventually wore the invaders down. In 382 the two sides agreed to a compromise peace in which the Goths were granted lands within the Roman Empire and became Roman allies (foederati).

In early 379 Gratian was forced to return west from Illyricum to deal with the incursions of Germanic tribes from across the Rhine. Sources variously describe these invaders as either just barbarians or Alemanni or Vandals, and even in the latter cases it is unclear whether they were talking about the northern Alemanni or the Lentienses, or the Silingi or Hasdingi Vandals. Whoever these invaders were, Gratian defeated them that year, allowing him to make his way back east in 380. in wikipedia

Persuaded by the treacherous Meruzhan Artsruni that the Persians were plotting to kill him, the Armenian regent Manuel Mamikonian attacked and massacred the 10,000-strong Persian cavalry detachment in Armenia. Shah Ardashir II (379–383), who had recently succeeded his brother Shapur II, responded by sending a number of armies against Armenia, but was unable to restore his authority over the kingdom. in wikipedia

Having advanced through the Succi Pass to plunder the Diocese of Dacia in 379, the Goths split up in early 380, with Fritigern’s Tervingi moving south into Macedonia and the Greuthungi of Alatheus and Saphrax heading northwest for Pannonia. Exactly what happened to the Greuthungi after this is uncertain, but they seem to have been defeated by—or at least come to terms with—Gratian and his forces as they returned from Gaul. While some of them may then have been resettled by the Romans, or fled southeast to join Fritigern, other Greuthungi seem to have withdrawn across the Danube to the lands west of the Carpathians. in wikipedia

Upon becoming emperor, Theodosius set himself up in Thessalonica and began rebuilding the eastern Roman army by rounding up deserters, drafting Roman and barbarian recruits, and calling in troops from across the East. This only produced an ill-disciplined and disorderly force, a situation made worse when the emperor fell seriously ill in the winter of 379/380. Taking advantage of these weaknesses, the Tervingi Goths swept into Macedonia in 380 and attacked the Roman camp at night. In the resulting debacle, Theodosius’ barbarian conscripts immediately defected to the Goths, his new army collapsed, and he himself narrowly escaped with his life. in wikipedia

In September 380 Gratian relieved Theodosius of the administration of the dioceses of Dacia and Macedonia, which were restored to a reestablished Praetorian Prefecture of Illyricum. The following year Gratian moved his residence from Augusta Treverorum (Trier) to Mediolanum (Milan), presumably in a bid to further increase his profile in Italy and along the Danube at the expense of his co-emperors. Other reorganizations, such as the creation of the Diocese of Aegyptus and possibly the partition of the Diocese of Italia into two vicariates, may be dated to around this time. in wikipedia

In the 370s both Athanaric’s Thuringii Goths and the Gepids seized lands from the Sarmatians, but in 380 the Gepids turned on the Thuringii and drove them from the Carpathians. After this defeat, Athanaric was deposed by rivals within the Thuringii and fled to the Roman Empire with his remaining supporters. He was warmly received in Constantinople by Theodosius, who accepted his men as allies and gave him a magnificent funeral when he died in 381. in wikipedia

In around 380 the Roman general Magnus Maximus was promoted to comes Britanniae, commander of the field army in Britain. The following year Maximus defeated an incursion of Picts and Scots, after which he led a campaign north of Hadrian’s Wall. in wikipedia

In May 381 the eastern Roman emperor Theodosius I convened a council of Christian bishops at the Church of Hagia Irene in Constantinople with the intention of obtaining a consensus on Christian affairs. Rejecting the Arian-leaning views that had been promoted in the East since 337 by the emperors Constantius II and Valens, the assembly confirmed the Nicene Creed that had been established by Constantine the Great and expanded its doctrine to produce the Niceno-Constantinopolitan Creed. However, its assertion that the Bishop of Constantinople was second only to that of Rome would later produce controversy. in wikipedia

381 Campaign of Bauto and Arbogast▲

After Theodosius’ defeat at Thessalonica, he withdrew to Constantinople and called on Gratian for assistance. Gratian responded by dispatching Bauto and Arbogast, two generals of Frankish descent, to the region. Arriving in Macedonia in the summer of 381, the two proceeded to drive Fritigern’s Goths out of the western empire into the already plundered regions of Thrace. Their options now limited, the Goths opened up negotiations with the Roman Empire. in wikipedia

After lengthy negotiations, the Romans and Goths formally agreed to peace in October 382. The exact terms of the treaty are uncertain, but they were unusually lenient on the Goths, granting them lands in Lower Moesia, Scythia, and possibly Macedonia in return for providing military support to Rome. Although dispersed by the treaty—and with no recognized leader surviving the war—the Goths retained their autonomy and a level of unity as foederati within the Empire. in wikipedia