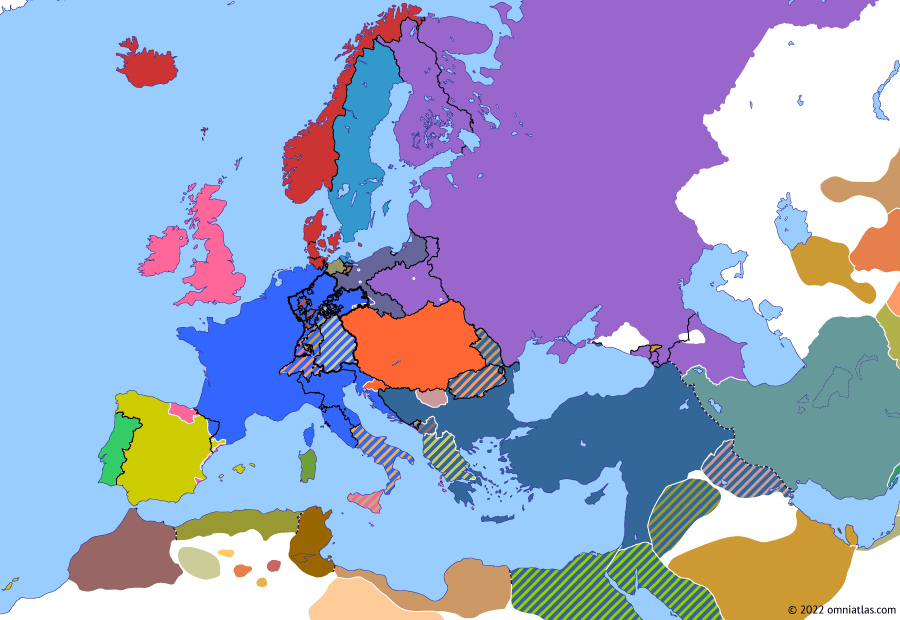 In August 1813 the Armistice of Pläswitz came to an end and Austria declared war on France. Now facing all three major continental powers, Napoleon defeated the Allies at Dresden but was unable to follow through on his success.

In July 1813 Tsar Alexander I of Russia, King Frederick William III of Prussia, and Crown Prince Charles John (formerly Bernadotte) of Sweden met at the palace of Trachenberg (now Żmigród) to decide on how to defeat Napoleon. Eventually the Allies agreed on a strategy of repeatedly approaching Napoleon’s main army but avoiding direct engagement with Napoleon himself. Instead, they would attack Napoleon’s marshals when they became separated from his main force and thus destroy the French army piecemeal.in wikipedia

In May 1812, threatened with invasion by France, Russia signed the Treaty of Bucharest with the Ottoman Empire and ended its support for the Serbian uprising. The following year the Ottomans invaded Serbia from the south, east, and west, defeating the Serbs on all fronts. In early October they captured Belgrade and the Serbian leader Karađorđe and many of his followers fled to the Austrian Empire. The First Serbian Uprising had been suppressed, but Serbian hostility to Ottoman rule remained strong.in wikipedia

Following their defeat of the French at the Battle of Vitoria (21 June 1813), the Duke of Wellington led his British, Portuguese, and Spanish forces to lay siege to Pamplona and San Sebastián. In late July the French marshal Nicolas Jean de Dieu Soult launched a counteroffensive to relieve the garrisons of these towns, breaking through the Pyrenees at the passes of Roncesvalles and Maya. However, Soult’s attempts to reach Pamplona were repulsed at Sorauren and by early August Wellington had driven the French back across the Pyrenees.in wikipedia

From 15 July to 10 August 1813, in the Congress of Prague, the Allies demanded that Napoleon abandon the lands he had taken east of the Rhine and return Illyria to Austria. Following the collapse of these talks, the Allies officially informed the French that the Armistice of Pläswitz would end on 17 August. On the 12th, two days after the talks ended, Austria joined the Sixth Coalition and declared war on France. For the first time in his reign, Napoleon faced an alliance of all four major European powers.in wikipedia

On 17 August 1813 Austrian forces crossed the Sava river in two columns, at Agram (Zagreb) and Sisak, beginning the Austrian reclamation of the Illyrian Provinces. The French commander at Karlstadt (Karlovac) attempted to defend his position, but was forced to abandon the town after the population revolted and the Croatian garrison mutinied. From here, the Austrians and their local supporters quickly expelled the French from most of the territory, although a number of urban garrisons held out until the spring of 1814.in wikipedia

On 19 August 1813, under Napoleon’s direction, the French marshal Nicolas Oudinot led a 70,000-strong army into Prussia with the intention of capturing Berlin and knocking the Prussians out of the war. The French advance was hampered by heavy rain storms, which turned the already swampy terrain into a quagmire and forced Oudinot to divide his forces, giving a substantial advantage to Berlin’s defenders, who were commanded by Crown Prince Charles John of Sweden—formerly Marshal Jean-Baptiste Bernadotte. On the 23rd the French arrived piecemeal at Großbeeren, allowing Charles John to smash one corps—and inflict several thousand casualties—before the others arrived. With morale low and his army in disarray, Oudinot retreated back south to Jüterbog.in wikipedia

In late August 1813 Emperor Francis II of Austria, King Frederick William III of Prussia, and Tsar Alexander I of Russia invaded Saxony from the south with a combined force of around 214,000 troops under the primary leadership of Austrian Field Marshal Karl von Schwarzenberg. The Allies hoped to take Dresden, which had a garrison of just 20,000 under Marshal Saint-Cyr, but were thwarted when, on the 26th, Napoleon raced in from the north with an army of over 100,000. Despite being heavily outnumbered, Napoleon repelled the Allied attack and then, on the 27th, launched a counterattack, inflicting some 38,000 casualties for a loss of just 10,000. Despite this, the Allies, aided by wet weather, managed to withdraw secretly and thereby escaped any attempt of encirclement or pursuit.in wikipedia

On 13 August 1813 the Prussian marshal Count von Blücher violated the Truce of Pläswitz—set to expire on the 17th—by attacking the French in Silesia with his Russo-Prussian army. Napoleon beat back this advance, but on the 23rd was forced to return to Saxony to deal with the Allied offensive against Dresden. With Napoleon gone, Blücher renewed his efforts and on 26 August, during a thunderstorm, his 95,000 troops mauled the remaining 75,000 French under Jacques MacDonald on the Katzbach river, inflicting 15,000 casualties for losses of just 4,000.in wikipedia