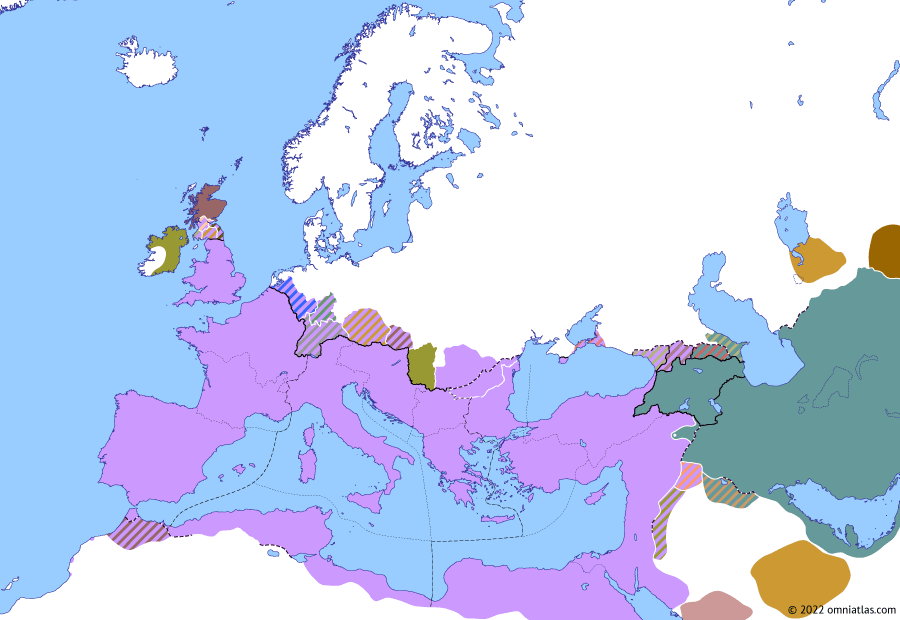 22 May 337Constantine dies
near Nicomedia

In late 336 Constantine began preparing for war with Persia, but only made it as far as the vicinity of Nicomedia when he fell ill. After his death in May 337, the army rallied behind his three sons—Constantine II, Constantius II, and Constans—and proclaimed them co-emperors.

336 Overthrow of Khosrov the Small▲

Apparently concerned about the alliance between the Christian rulers of Rome and Armenia, Shapur II, shah of Sasanian Persia, sent his general Narseh to invade Armenia in 336. Many Armenians were Zoroastrian or otherwise pro-Persian and welcomed Narseh, who quickly captured the Armenian king Khosrov III the Small and replaced him with a Persian client. At about the same time, Vache I, the Arsacid king of Albania, abandoned the Romans and became a vassal of Shapur.in wikipedia

After conquering Armenia in 336, the Persian general Narseh crossed into Roman territory and took the fortified settlement of Amida by storm. He then advanced into Roman Mesopotamia but was soon defeated and killed by Constantius II at nearby Narasara. After this, Constantius retook Amida and restored the frontier.in wikipedia

In response to the Persian conquest of Armenia in 336, Constantine began preparing for war. In early 337 he bestowed on his nephew Hannibalianus the title of Rex Regum et Ponticarum Gentium (“King of Kings and king of the Pontic Peoples”), apparently in order to set him up as the future Roman ruler of Persia and Armenia.in wikipedia

In spring 337, shortly after departing Constantinople to begin his war with Persia, Constantine fell ill. At the villa of Achyron, near Nicomedia, he was baptized by the Arian bishop Eusebius of Nicomedia and then died. His body was transferred back to Constantinople, where he was buried in the Church of the Holy Apostles, surrounded by the memorial steles of the Twelve Apostles.in wikipedia

Learning of Constantine’s death in 337, the Persian shah Shapur II invaded Roman Mesopotamia with a large force—infantry, cavalry, and war elephants—and besieged the strategic city of Nisibis. Persian engineers redirected the river Mygdonius, which smashed through the walls of Nisibis and flooded parts of the city. Encouraged by Bishop Jacob of Nisibis, the Roman defenders worked overnight to block the breaches and the next day repelled the Persian attack. With his efforts defeated, Shapur II lifted the siege and withdrew.in wikipedia

Following the death of Constantine and the overthrow of Dalmatius in 337, the Sarmatians asserted their independence from Rome. Constantius II, who was marching through the Balkans to establish his control in Dalmatius’ former realm, fought and presumably defeated them by September.in wikipedia

During the purge following the death of his father Constantine in May 337, the 20-year-old Constantius II seized control of the deposed Dalmatius’ territory in the Balkans. In September his two brothers Constantine II and Constans—in control of Gaul and Italy respectively—met with him in Pannoniae, where all three were proclaimed joint Augusti by the army and part of Constantius’ gains in the Balkans were ceded to Constans. However, as Constans was at the time only about 14, he was initially under the guardianship of the 21-year-old Constantine.in wikipedia

Following the death of his father Constantine I in May 337, the 21-year-old Constantine II seems to have inherited the position of Senior Augustus, ruling from Gaul in an hereditary tetrarchy composed of his brothers, Constantius II and Constans, and his cousin Dalmatius. However, Dalmatius was killed almost immediately afterwards, leading to a new division of the Empire among the three brothers in September 337. From then on Constantine II’s rulings seem to have been frequently ignored by his younger brothers and in 340 he was killed in an ambush by Constans’ generals while still trying to assert his authority.in wikipedia

In September 337 Constantius II was confirmed as Augustus over the Prefecture of the East; he later became Augustus of a reunited Roman Empire in 353, after the deaths of his brothers and a civil war with Magnentius. In his religious policies, Constantius promoted Arian Christianity over the formerly-favored Nicene Creed, banned pagan sacrifices, and issued laws against Jews. His long reign came to an end in 361, when he died of fever while preparing for war with his cousin Julian, who had usurped power in the West.in wikipedia

In September 337 Constans, then in his mid-teens, was acknowledged as Augustus in the Prefecture of Italy and three years later, following the killing of his eldest brother Constantine II, gained control of Gaul. Accused of corruption, cruelty, and favoring barbarian men, Constans was also apparently afflicted with gout in his hands and feet by his twenties. In January 350 he was overthrown in a revolt led by the commander Magnentius and killed soon afterwards.in wikipedia