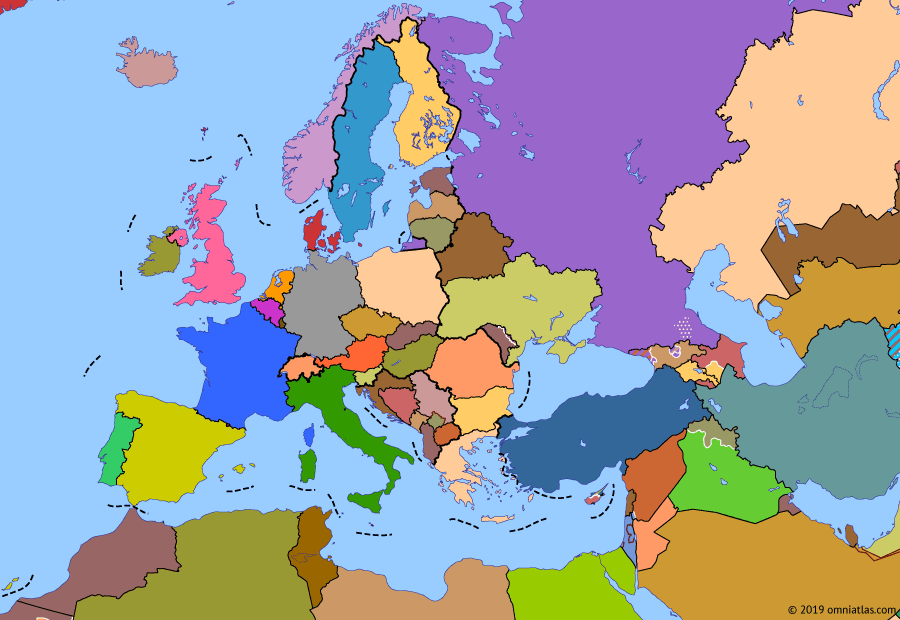 The collapse of Russian power in 1989–91 had allowed NATO and the EU to absorb not only the former Soviet satellites in eastern Europe but also the former Soviet Republics in the Baltic. In the 2000s, it began to look like Georgia, Ukraine, and some of the other ex-Soviet states might soon follow. However when a resurgent Russia intervened in Georgia's dispute with its own breakaway republics, any thoughts of further Western expansion were put on hold.

The accession of the Visegrád group encouraged yet more Eastern European countries to join NATO. In 2000, the Vilnius Group was established as a collective lobby to join. In 2004, Vilnius Group members Bulgaria, Estonia, Latvia, Lithuania, Slovakia, Slovenia, and Romania were admitted into the alliance. Of the three Vilnius members who were not admitted, Croatia and Albania joined in 2009, while Macedonia’s membership was vetoed by Greece.in wikipedia

In 2004, Ukraine held a Presidential election between pro-western Viktor Yushchenko and pro-Russian Viktor Yanukovych. Yanukovych won, but the election was marred by a chemical assassination attempt on Yushchenko, and widespread corruption within the electoral process led many to question the legitimacy of the poll. After two months of mass demonstration (known as the Orange Revolution), the Supreme Court required a re-vote, which was won by Yushchenko.in wikipedia

In February 2005 former Lebanese Prime Minister Rafic Hariri—a critic of the Syrian occupation of Lebanon—was assassinated, with a later investigation implicating Hezbollah, a Shiite militia supported by Syria. The assassination triggered two months of peaceful protests throughout Lebanon demanding Syrian withdrawal, the replacement of the Syrian-influenced government, and calls for an international investigation. Bowing to pressure, the Syrians withdrew their 14,000 soldiers and intelligence agents from Lebanon in April.in wikipedia

Israel’s withdrawal from southern Lebanon in 2000 enabled Hezbollah to consolidate power in the region and launch increasingly aggressive cross-border attacks into Israel. After Hezbollah mounted cross-border raids and rocket attacks in 2006, Israel invaded southern Lebanon, launching airstrikes on military and civilian targets as far as Beirut. The war ended with a UN ceasefire in August, after which the Lebanese Army and an enlarged UN presence replaced Israeli and Hezbollah forces in southern Lebanon.in wikipedia

Bulgaria and Romania acceded to the European Union in accordance with a 2005 treaty. The accession made Cyrillic—used by Bulgaria—the third official alphabet of the EU, after Latin and Greek.in wikipedia

Having spent nearly a decade of quasi-independence under UN administration, and having an EU-sponsored independence plan rejected by both Serbia and Russia, the Republic of Kosovo unilaterally declared independence. Serbia immediately denounced the declaration as illegal while the United States and most of its allies quickly recognized Kosovo as a sovereign state. However many nations would continue to refuse to recognize Kosovo’s independence, including Russia, China, India, Spain, Brazil, Indonesia, and Mexico.in wikipedia

The rise of Vladimir Putin in Russia and subsequent pro-western Rose Revolution in Georgia severely strained relations between the two countries. When Georgia began retaliating against shellings by Russian-backed separatists in South Ossetia, Russia invaded, bombing the capital Tblisi and capturing the main port city of Poti. After five days, a French-mediated ceasefire was declared, by which time Russia had effectively won the war, establishing military bases in South Ossetia and Abkhazia, and deterring further integration of Georgia into the European sphere of influence.in wikipedia