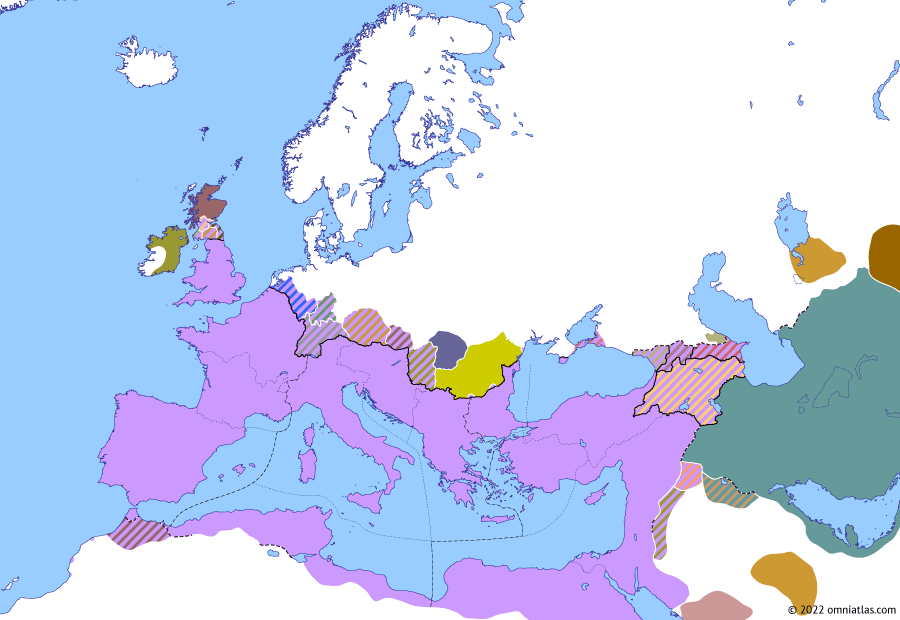 Following his victory over Licinius in 324, Constantine rebuilt the city of Byzantium as his new imperial residence and de facto capital, renaming it as Constantinople. Dedicated in May 330, Constantinople would remain officially subordinate to Rome for several decades but eventually grow to surpass it.

Following his victory over Licinius, Constantine selected Byzantium—strategically located between Europe and Asia, and the Black Sea and Mediterranean—as the site for his new imperial residence. Over the next six years he had the city greatly expanded and encouraged people from across the Roman Empire to move there, dedicating the rebuilt Byzantium as Constantinople in 330. Constantine used Constantinople as his capital and permanent residence but, although it had its own senate, it would remain officially subordinate to Rome until 359.in wikipedia

In 325, having reached the age of sixteen, Shah Shapur II of Persia led a campaign to expel the Arabs from Mesopotamia and the Persian coast, which they had occupied during his youth. After this, he crossed the Persian Gulf, reasserted Persian control over eastern Arabia, and launched a punitive campaign deep into the Arabian interior. He destroyed wells, led Arab prisoners through the desert by ropes strung through their pierced shoulders, and forcibly relocated many Arabs within his empire. To protect Persia from further Arab raids, a “Wall of the Arabs” was built along the Euphrates.in wikipedia

In 325 Constantine invited all 1,800 bishops of the Christian church within the Roman Empire to meet at Nicaea to attain a consensus on Christian affairs; about 300 actually attended and the Council was formally opened in May. The Council condemned Arianism—which held that Jesus is subordinate to God—in favor of what would become known as the Nicene Creed—which affirmed that God, Jesus, and the Holy Spirit were of the same essence. After this the Council mandated a calculation for the date of Easter and promulgated early canon law, establishing a degree of unity in the Christian church.in wikipedia

In 326, for uncertain reasons, Constantine had his eldest son Crispus put to death and placed a damnatio memoriae on him, his wife, and his infant son. Soon afterwards, or at least by 328, Constantine also killed Fausta, his wife and Crispus’ stepmother, by locking her in a scalding bath, and placed a damnatio on her too. Some ancient historians tie these two deaths together, accusing Fausta of framing Crispus in some way and later being caught in adultery, but this may just be speculation and other theories abound.in wikipedia

Following the death of Crispus in 326, Constantine was left with three Caesars—his sons Constantine II, Constantius, and Constans—of whom the oldest was 10. As they were still too young to help him rule the vast Roman Empire, Constantine placed each son with a praetorian prefect who would administer a defined prefecture—Gaul, Italy, or the East—in the boy’s name. To prevent the praetorian prefects from becoming too powerful, he created the magistri militum (Masters of the Soldiers) to command the troops but kept the prefects responsible for funding and supplying the army.in wikipedia

In July 328 Constantine completed a great bridge across the Danube—at 2.5 km long and 5.7m wide it was longer than, but not as wide as, Trajan’s bridge—which he supported with a number of forts in the territory of the Tervingi Goths. The Tervingi waited until Constantine had departed for the Rhine in late 298 before they retaliated, but he quickly returned and in 299 crushed them in a short campaign, earning the title Gothicus Maximus.in wikipedia

By late 328 the Rhine frontier had grown restive again and Constantine traveled from the Danube to Augusta Treverorum (Trier). In a short campaign he heavily defeated some German tribes and earned another title of Germanicus Maximus.in wikipedia

In probably either 329 or 330 the Alemanni became hostile on the Upper Rhine. With Constantine in the Balkans, the command in Gaul fell to his 14-year-old son Constantine II, who, with the aid of military officers and the Praetorian Prefect, decisively defeated them and gained the title Alemannicus.in wikipedia