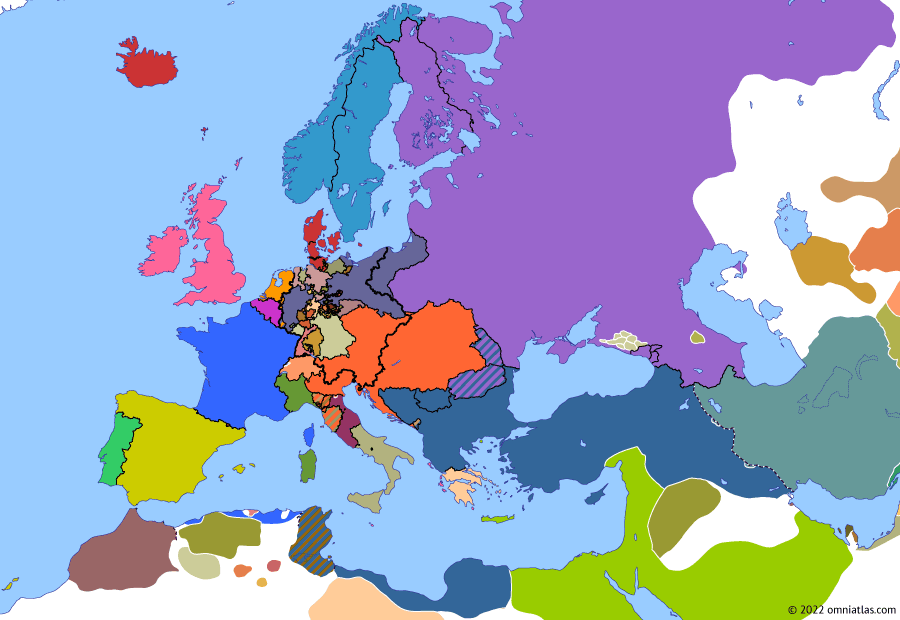 The Ottoman army attempted to reconquer Syria in 1839, but was routed by the Egyptians. To make matters even worse for the Ottomans, the Sultan died just days later - to be succeeded by his teenage son - and the entire Ottoman fleet defected to Egypt. With the Ottoman Empire apparently on the verge of collapse, the Great Powers stepped in. In 1840 they issued the Convention of London, demanding that Egypt abandon its conquests and accept Ottoman suzerainty.

On 24 August, Carlist forces of the Royal Expedition ambushed and routed a Liberal force at Villar de los Navarros in Zaragoza, Spain, taking over 1,200 prisoners. The Carlist victory opened the way into Castile, and, on 11 September, 12,000 troops of the Royal Expedition under Don Carlos crossed the Tagus and arrived in Arganda on the outskirts of Madrid. After four days, Carlos decided against either assaulting the capital or attacking the Espartero’s nearby army and withdrew, with Espartero in pursuit.in wikipedia

The United Kingdom and the Ottoman Empire signed the Treaty of Balta Liman—a one-sided formal agreement opening Ottoman markets to British trade. The treaty abolished all Ottoman commercial monopolies and gave British subjects the right to trade freely within the empire. As a result of the treaty, Britain agreed to support the Ottoman Empire against Muhammad Ali’s Egypt.in wikipedia

Austria, France, Prussia, Russia, the United Kingdom, the Netherlands, and Belgium signed the Treaty of London, recognizing and guaranteeing the independence of Belgium. The treaty also required Belgium to remain neutral, committing the signatories to protect that neutrality, and recognized the full independence of the German-speaking part of Luxembourg (the modern nation of Luxembourg). Also, to compensate the German Confederation for the loss of western Luxembourg to Belgium, the Dutch created the Duchy of Limburg in the eastern Netherlands to function as both a Dutch province and a German duchy. This treaty would be disregarded as “a scrap of paper” by Germany when it invaded Belgium in 1914.in wikipedia

In an attempt to reassert itself over Muhammad Ali’s Egypt, Ottoman troops under the leadership of Hafiz Osman Pasha invaded Egyptian-ruled Syria in April 1839. In June a superior Egyptian force under Ibrahim Pasha arrived in the area, prompting Helmuth von Moltke—Hafiz Pasha’s Prussian adviser and Bismarck’s future chief of staff—to recommend the Ottomans withdraw and await reinforcements. Rejecting this advise, Hafiz Pasha held his ground and was completely routed by the Egyptians.in wikipedia

After sailing to Alexandria on the pretext of attacking Muhammad Ali’s Egypt, but actually believing that incoming Sultan Abdulmejid would become a pawn of the Russians, Grand Admiral Ahmed Fevzi Pasha surrendered the entire Ottoman fleet to the Egyptians without a fight.in wikipedia

Sultan Mahmud II of the Ottoman Empire died of tuberculosis and was succeeded by his son—sixteen-year-old Abdulmejid. Abdulmejid was immediately faced by the dual crises of the Egyptian defeat of the Ottoman army at Nezib and the defection of the Ottoman fleet to Egypt.in wikipedia

A 5,000-strong Russian force under the command of Vasily Perovsky departed Orenburg across the steppes for Fort Emba and Ak Bulak, in several columns starting 26 November 1839, in a campaign to conquer the Khanate of Khiva. The late departure meant they only reached Emba at the end of December and were already facing deep snow and cold. By February—when they finally arrived in Ak Bulak—disease and Khivan raiders had killed hundreds and left over a thousand sick. Realizing the expedition had failed, Perovsky withdrew back to Orenburg with his remaining troops.in wikipedia

In response to the Egyptian invasion of Nejd and Yemen, the British seized control of Aden in 1839 and made defensive treaties with the Persian Gulf states. Under pressure by these moves and warned by the European powers, Muhammad Ali of Egypt agreed to the evacuation of Nejd and Yemen in March 1840. Egyptian troops began their withdrawal from Yemen in May and Nejd in September, with their last forces leaving Riyadh in early 1841.in wikipedia

Some 20,000 Spanish Liberal troops under the command of Baldomero Espartero besieged the fortress town of Morella in Valencia, defeating its few thousand defenders led by Ramón Cabrera. Although Cabrera managed to escape north to Berga in Catalonia, this battle effectively ended fighting in the First Carlist War. On 4 July, Berga fell without resistance and Cabrera and a number of Carlist refugees fled across the French border.in wikipedia

The Great Powers of the United Kingdom, Austria, Prussia, and Russia signed the Convention for the pacification of the Levant with the Ottoman Empire, agreeing to support the Ottomans against Muhammad Ali’s Egypt. By the terms of the convention, the Ottoman Empire was to declare the Turkish Straits closed to warships in peacetime, while the Egyptians were to withdraw from their conquests and accept Ottoman suzerainty. Muhammad Ali, supported by France, rejected the convention.in wikipedia