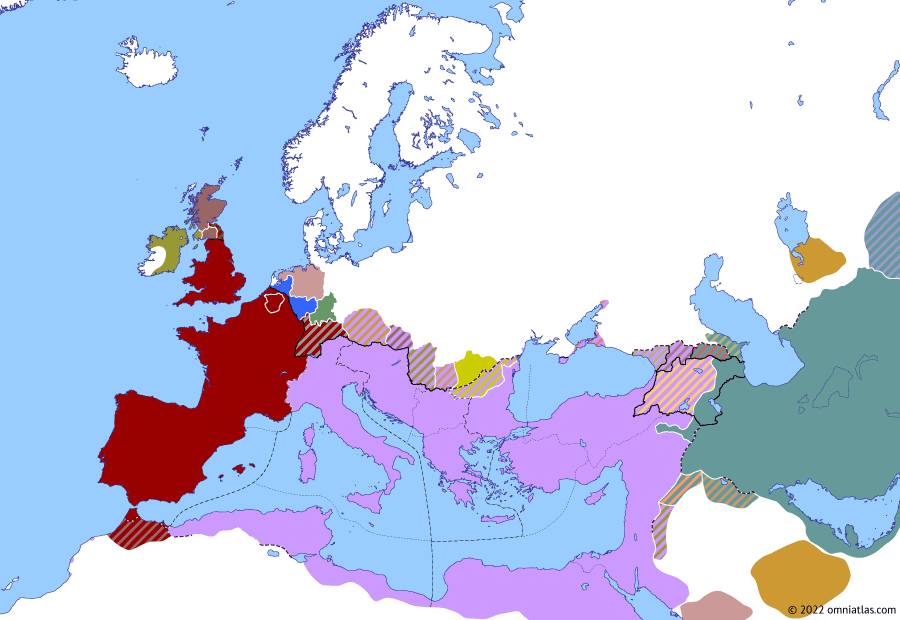 357–358Julian defeats
Frankish raiders;
allows some to
settle in Gaul

In 359 the important fortress of Amida fell to Shah Shapur II of Persia, prompting Constantius II to order Julian to send Gallic troops for a campaign in the East. Refusing to go, the Gallic troops proclaimed Julian emperor instead.

After his victory at Argentoratum (Strasbourg), Julian crossed the Rhine, advancing over 16 km into the territory of the Alemanni through snow and forest until the weather forced him to withdraw. In 358 two Alemannic kings, Suomar and Hortar, agreed to submit to him and in the following year he launched a renewed campaign against the others. Pushing through as far as a region called Capellatum, or Palas, on the Burgundian frontier, Julian cowed the remaining Alemanni into submission and restored peace along the Rhine. in wikipedia

Taking advantage of Julian’s invasion of the lands of the Alemanni in late 357, six hundred Frankish raiders crossed into Gaul and seized two forts on the Meuse. Julian forced these invaders to surrender as he marched back to Lutetia (Paris) for the winter, only for the Salian Franks and the Chamavi to occupy the same region early the next year. He drove off the Chamavi, but allowed the Salians, who had quickly submitted to him, to remain in Texandria. in wikipedia

In early spring 358 Constantius II marched out of Sirmium to confront the Sarmatians and Quadi, who had together being raiding Roman territories. Crossing the Danube, he quickly forced both tribes to submit, but by summer found himself facing the Limigantes, who had overthrown their Sarmatian masters and established themselves around the Danube–Tisza junction. Aided by the Taifals and Sarmatians, he crushed these rebels too, but permitted them to retain their lands as a client kingdom of Rome. in wikipedia

Constantius II’s peace treaty with the Limigantes was not more than a few months old, when the Limigantes rose up again in the early winter of 359 and invaded the lands of the Sarmatians. Traveling to Acimincum (Stari Slankamen) on the Danube, Constantius called on the Limigantes to submit, but when they arrived, they suddenly attacked his guards and he narrowly escaped with his life. Following this incident, the Romans invaded the Limigantes and massacred them without mercy, apparently destroying them all. in wikipedia

In early 358 Shah Shapur II of Sasanian Persia made a treaty of alliance with his former enemy Grumbates of the Chionite Huns, and together the two rulers marched westwards towards the Roman frontier, rejecting calls for peace by Constantius II. The Persian and Chionite armies crossed the Tigris in the spring of 359, but were forced north, away from Nisibis, when the Romans set all their crops afire, depriving the invaders of supplies. Passing through the mountain foothills, Shapur captured a number of small Roman forts as he approached the great fortified city of Amida. in wikipedia

In the summer of 359 Shah Shapur II of Persia and his ally Grumbates of the Chionite Huns approached the gates of the Roman fortified city of Amida, demanding its surrender, but the garrison—now strengthened to seven legions and some cavalry—rained down ballista fire on them, killing Grumbates’ son. Enraged, the invaders began a brutal siege, attacking the city with mines, iron-clad siege towers, and elephants—all of which were thwarted by the defenders. Eventually, after 73 days and an alleged 30,000 casualties, the Persians entered the city by mounds raised against its walls, proceeding from there to massacre or enslave its entire population. in wikipedia

Constantius II had largely avoided Constantinople during his reign but in late 359 he returned to reside there as he prepared for a new Persian campaign. That December he acknowledged the city’s status as a capital comparable to Rome by appointing the first known Urban Prefect of the City Honoratus there and granting him jurisdiction over the three neighboring provinces. Even so, it would not be until the accession of Theodosius I in 379 that emperors would start favoring Constantinople as their permanent residence. in wikipedia

In the early winter of 360 news reached the Caesar Julian in Lutetia (Paris) that the Picts and Scoti were plundering the border districts of Britain. In response, he dispatched his magister equitum Lupicinus to the island to deal with the situation. When Lupicinus returned later that year, he found that Julian had been proclaimed emperor in his absence and, as a supporter of Constantius II, was quickly arrested. in wikipedia

In early 360 a tribune arrived in Gaul, commanding Julian to immediately dispatch four regiments and 300 picked troops to support Constantius II against the Persians. Although Julian made moves to obey these orders, his troops were reluctant to travel to the East. Instead, as they mustered in Lutetia (Paris), they proclaimed the 28-year-old Julian as Augustus and raised him atop a shield for all to see. in wikipedia