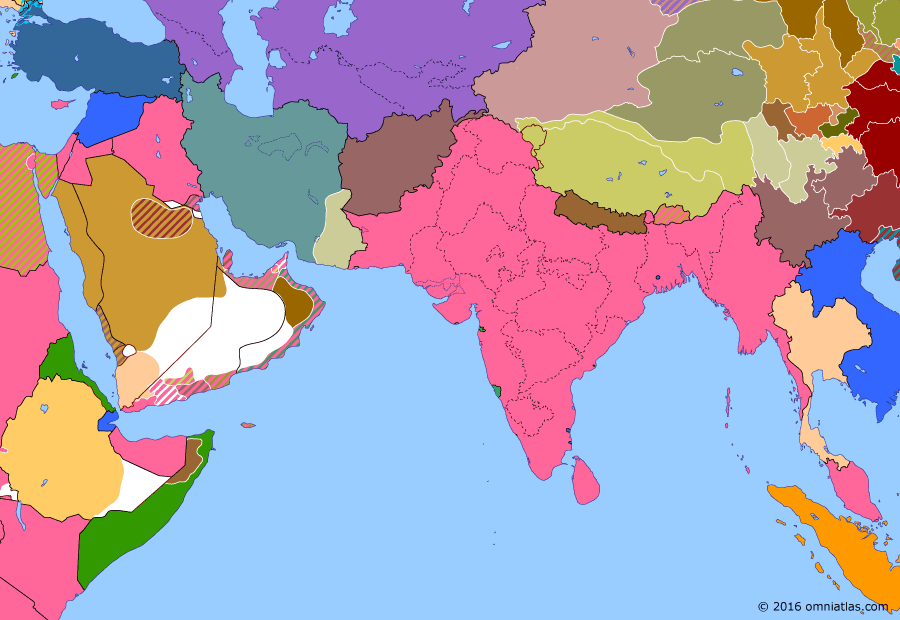 In December 1925 the Saudis completed their conquest of Hejaz, creating the Kingdom of Hejaz and Nejd. In order to gain British recognition of his conquests, Ibn Saud signed the Treaty of Jeddah, agreeing not to threaten the numerous British protectorates which surrounded his new kingdom.

The British-mandated Emirate of Transjordan signed the Hadda Agreement with the Sultanate of Nejd, formally defining the boundary between the two countries in the wake of the Kuwait Conference. The agreement concluded by stating that it would “remain in force for so long as His Britannic Majesty’s Government [was] entrusted with the Mandate for Trans-Jordan”in wikipedia

After sending a fact-finding commission to the region, the League of Nations concludes that the Mosul Vilayet—disputed between the Turkish Republic and British controlled Kingdom of Iraq—belongs to Iraq. Turkey protests the decision but agrees to cede its claim in June 1926 in return for a share of oil profits.in wikipedia

Under siege since February 1925 and with their supplies running out, the chiefs of Jeddah agree to surrender their city to the Saudi forces of the Sultanate of Nejd, while King Ali bin Hussein of Hejaz flees to Baghdad via the Red Sea. Medina falls to the Saudis two days later, effectively completing the Saudi conquest of the Kingdom of Hejaz.in wikipedia

Generalissimo Chiang Kaishek, leader of the Kuomintang (KMT), declares the start of the Northern Expedition, intending to end warlord rule in northern China and reunify China under the KMT. With 100,000 soldiers of the National Revolutionary Army, Chiang invades northern Hunan from the south, capturing Changsha on 11 July.in wikipedia

Sir Gilbert Clayton, the British emissary and former head of the Arab Bureau, signs the Treaty of Jeddah with Ibn Saud, King of the Kingdom of Nejd and Hejaz, at Jeddah, Hejaz. The treaty formally recognizes Ibn Saud’s independence and sovereignty over the new frontiers of the Kingdom of the Nejd and Hijaz in return for Ibn Saud’s agreement to stop his forces from harassing the neighboring British protectorates.in wikipedia