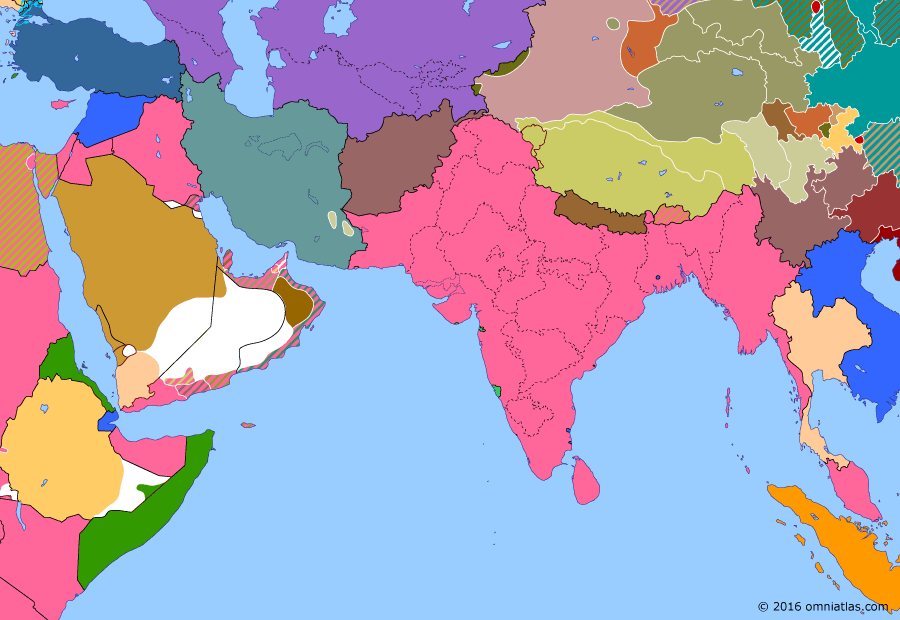 The Saudi defeat of the Ikhwan in 1930 secured Ibn Saud's power in central Arabia. On 22 September 1932 he proclaimed the unification of the kingdoms of Hejaz and Nejd as the new Kingdom of Saudi Arabia.

In 1930 Jin Shuren, governor of the semi-independent Chinese province of Xinjiang, annexes the Khanate of Kumul—a small Uyghur state with a long history of autonomy. Tensions over the annexation lead to rebellion in April the following year, when Uyghurs massacre a Chinese police chief and his troops after he attempts to seduce a Uyghur woman.in wikipedia

Ma Zhongying, a Muslim warlord of Gansu province and a member of the Ma clique, invades Xinjiang province to support the Kumul Rebellion in western China. Ma claims his intervention is on behalf of the National Government of China—which has indeed secretly agreed to recognize him if he captures Xinjiang from the reigning governor Jin Shuren. However, he fails to capture the city of Kumul and is forced to withdraw after he is wounded.in wikipedia

Following the Mukden Incident, the Kwantung Army of the Empire of Japan invaded Manchuria—the semi-independent northeast provinces of the Republic of China under the governorship of Zhang Xueliang. After occupying the southern provinces of Liaoning and Kirin, the Japanese advanced north into Heilongjiang, completing its conquest in February 1932.in wikipedia

In the mid-1920s and early 1930s Kyrgyz nomads flee Soviet collectivization, crossing the Pamir Mountains into Xinjiang in western China. In March 1932 they begin asserting themselves against the local government and conducting raids back into Soviet Union with the support of Chinese Kyrgyz. They are defeated by joint Xinjiang-Soviet operations.in wikipedia

The government of the Kingdom of Hejaz and Nejd, under King Abdulaziz bin Abdul Rahman (‘Ibn Saud’), proclaimed the unification of the two kingdoms as the Kingdom of Saudi Arabia.in wikipedia