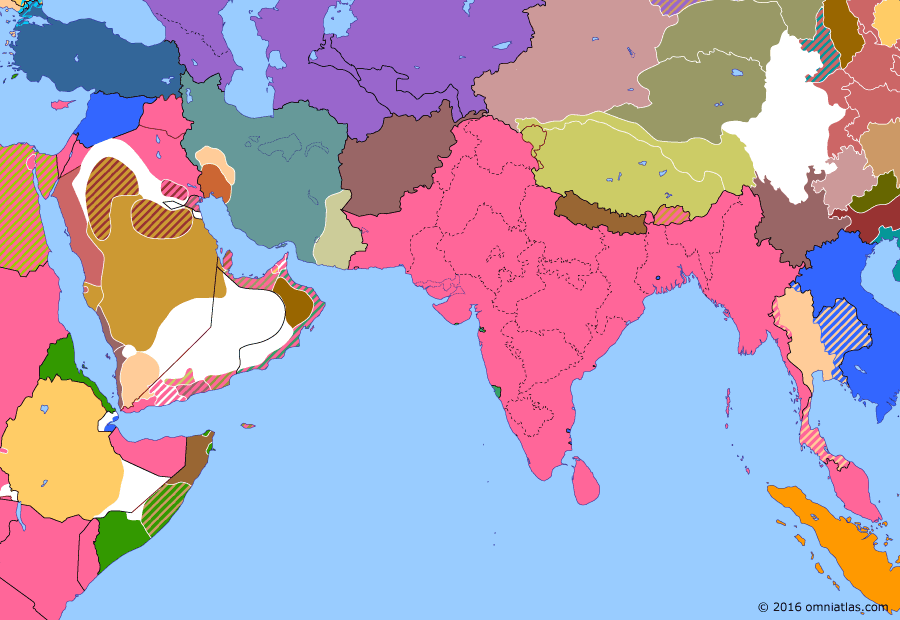 In 1924 the new Republic of Turkey abolished the Ottoman Caliphate. Taking advantage of the situation, King Hussein of Hejaz, ruler of Mecca, immediately declared himself Caliph. This was not well received in much of the Muslim world, leading the British to end its support for the unpopular Hussein and encouraging the Saudis - already at loggerheads with Hejaz - to invade. Hussein fled before the advancing Saudis, and on 13 October they entered Mecca.

Chandra Shamsher, Prime Minister of the Kingdom of Nepal, signs the Nepal-Britain Treaty with W.F.T. O’Connor, British Envoy at the Court of Nepal, recognizing Nepal as an independent and sovereign nation. The Treaty supersedes the Sugauli Treaty of 1816, which had effectively made Nepal a tributary of the British Empire.in wikipedia

3 Mar 1924 Abolition of the Ottoman Caliphate▲

On the initiative of President Mustafa Kemal, the National Assembly of the Republic of Turkey abolishes the Ottoman Caliphate. The last Caliph, Abdülmecid II, is sent into exile along with the remaining members of the Ottoman House.in wikipedia

In response to the Turkish abolition of the Ottoman Caliphate, Hussein bin Ali, Sharif of Mecca and King of Hejaz and the Arab lands, declares himself Caliph at his son Abdullah’s winter camp in Shunah, Transjordan. Although his claim is based on his prophetic ancestry and his control of Islam’s two holiest mosques, the Masjid al-Haram and Al-Masjid al-Nabawi, it has a mixed reception across the Muslim world.in wikipedia

At the Anglo-Italian Convention of 1924, the United Kingdom agreed to cede a portion of Jubaland, part of the Colony and Protectorate of Kenya, to the Kingdom of Italy. The agreement was ratified on 1 May 1925 and effective as of 29 June 1925. The Italians referred to the territory as Trans-Juba.in wikipedia

Saudi-allied Ikhwan, under the leadership of Sultan bin Bajad and Khaled bin Luwai, attack Ta’if, Kingdom of Hejaz, in the first large-scale attack of the Saudi invasion of Hejaz. The defenders, including King Hussein bin Ali’s son—Ali bin Hussein, flee in panic and the city is quickly conquered by the Ikhwan, who massacre some 300-400 of Ta’if’s residents.in wikipedia

In the face of the Saudi Sultanate of Nejd’s invasion of the Hashemite Kingdom of Hejaz, King Hussein bin Ali abdicated in favor of his son Ali bin Hussein on 3 October 1924. Ten days later, the Saudi forces entered Mecca, which had been abandoned by the Hashemites as they fled for the port city of Jeddah.in wikipedia