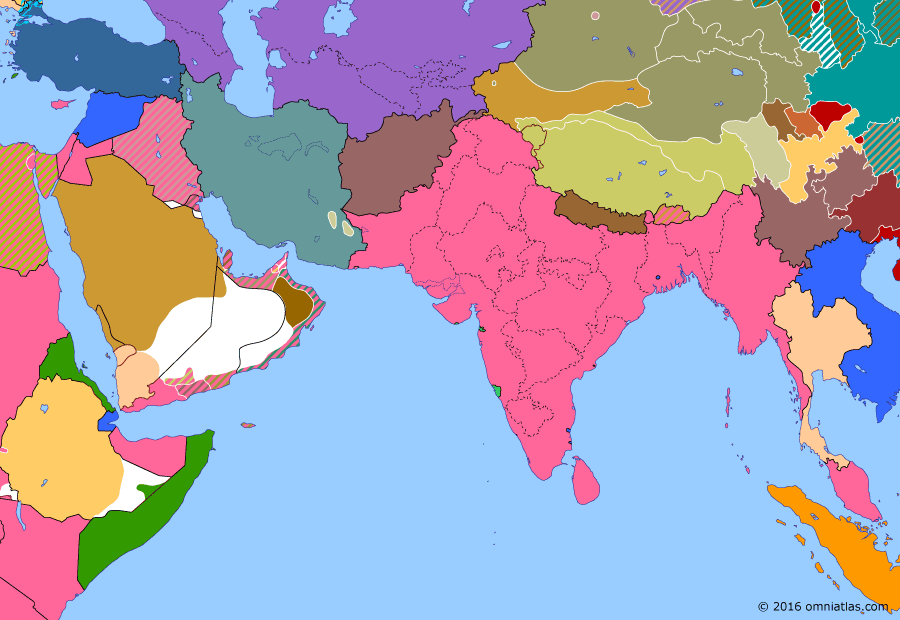 Jan 1933Hitler sworn in as
Chancellor of Germany

In 1931 the warlord-ruled Chinese province of Xinjiang fell into civil war when the former khanate of Kumul revolted against the government. The neighboring Muslim Chinese of the Ma Family invaded in support of Kumul, but eventually fell out with the native Uyghur people. On 12 November 1933 the Uyghurs of southern Xinjiang declared their independence as the East Turkestan Republic, but their new state would barely last five months before being crushed by the Ma.

Following the Anglo-Iraqi Treaty of 1930, the Kingdom of Iraq is granted independence under King Faisal I bin Hussein bin Ali al-Hashimi. By the terms of the treaty, Britain has the right of transit for military forces and may maintain air bases near Basra and Habbaniya. In times of war, these rights are to be extended to include use of “all possible facilities”.in wikipedia

Ma Zhongying returns to Xinjiang, as a representative of the Kuomintang and leader of the 36th Division, intent on the overthrow of Governor Sheng Shicai. He captures Kumul and advances on Urumqi, the provincial capital.in wikipedia

After the largely Christian Assyrians of northern Iraq refuse to sign a declaration of loyalty to King Faisal I, the newly independent Kingdom of Iraq initiates a military campaign against them. The Iraqi army hits 63 villages in the Dohuk and Mosul districts, resulting in the deaths of around 3,000 Assyrians. The action temporarily strains Anglo-Iraqi relations.in wikipedia

Sabit Damulla, leader of the Khotan Rebellion against both Jin Shuren’s government in Xinjiang and the intervening Ma family, declares the establishment of the Turkish Islamic Republic of East Turkestan (TIRET, also called the First East Turkestan Republic) in Kashgar, even though Ma Zhanchang still holds out in Kashgar New City. Sabit Damulla becomes prime minister and names fellow Uyghur revolutionary Hoja-Niyaz as president. Despite currently fighting in the Kumul Rebellion to the north, Hoja-Niyaz travels south to join the new republic.in wikipedia