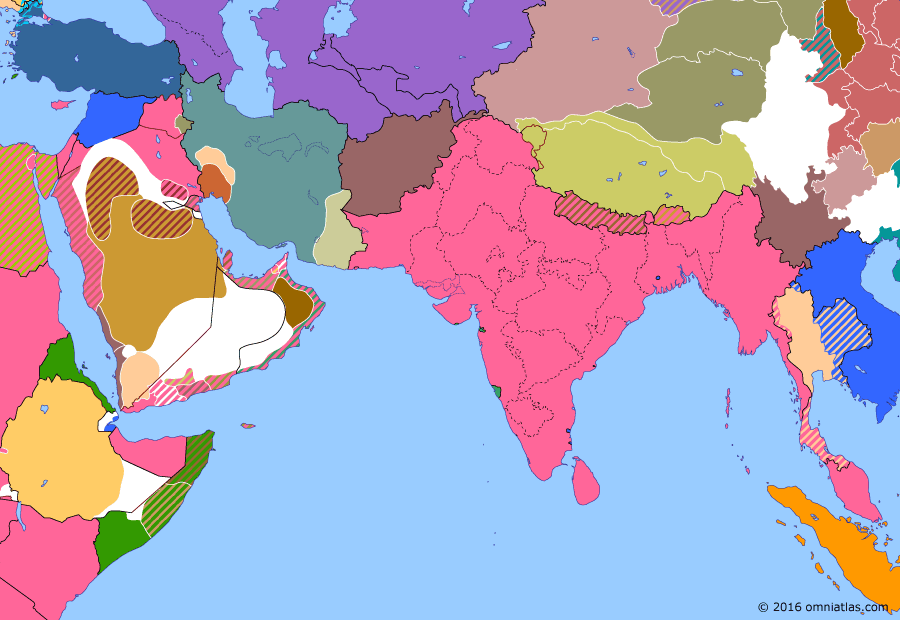 May 1923Transjordan separated
from Palestine

Jun 1923Soviets crack down on
nationalists in Bukhara

By 1923 the Turkish War of Independence was all but over, with the Allies abandoning their attempt to partition Anatolia according to the Treaty of Sevres. At the Treaty of Lausanne, they made peace with the Turkish nationalists and recognized the new state of Turkey.

25 May 1923 Separation of Transjordan from Palestine▲

The United Kingdom formally recognizes the Emirate of Transjordan as independent from Palestine. The British will gradually relinquish control of the government, limiting their oversight to financial, military, and foreign policy matters.in wikipedia

Following the fourth meeting of the Central Committee of the Russian Communist Party in Moscow (9-12 June 1923), Josef Stalin, General Secretary of the Central Committee of the Communist Party of the Soviet Union, denounces the situation in the Bukharan People’s Soviet Republic, where he claims merchants and intellectuals hold power at the expense of the peasants. The Politburo then adopts a resolution on Bukhara, curbing the influence of the Young Bukharans in its government.in wikipedia

The Grand National Assembly of Turkey signed the Treaty of Lausanne with the British Empire, the French Republic, the Kingdom of Italy, the Empire of Japan, the Kingdom of Greece, and the Kingdom of Romania in Lausanne, Switzerland. The treaty superseded the failed Treaty of Sèvres, defining the borders of the new Turkish Republic and recognizing it as the successor of the Ottoman Empire. The treaty also demilitarized the Daradanelles, opening the Turkish Straits to unrestricted civilian and military traffic, under the supervision of the International Straits Commission of the League of Nations.in wikipedia

Despite signing the Treaty of Lausanne, the Republic of Turkey and the Kingdom of Iraq, a British dependency, continue to dispute the possession of the oil-rich former Ottoman Vilayet of Mosul. The region is also claimed for a independent state by its Kurdish inhabitants. Eventually a League of Nations investigative commission recommends that Iraq should retain Mosul and Turkey backs down in return for a 10 percent royalty on Mosul’s oil deposits for 25 years.in wikipedia