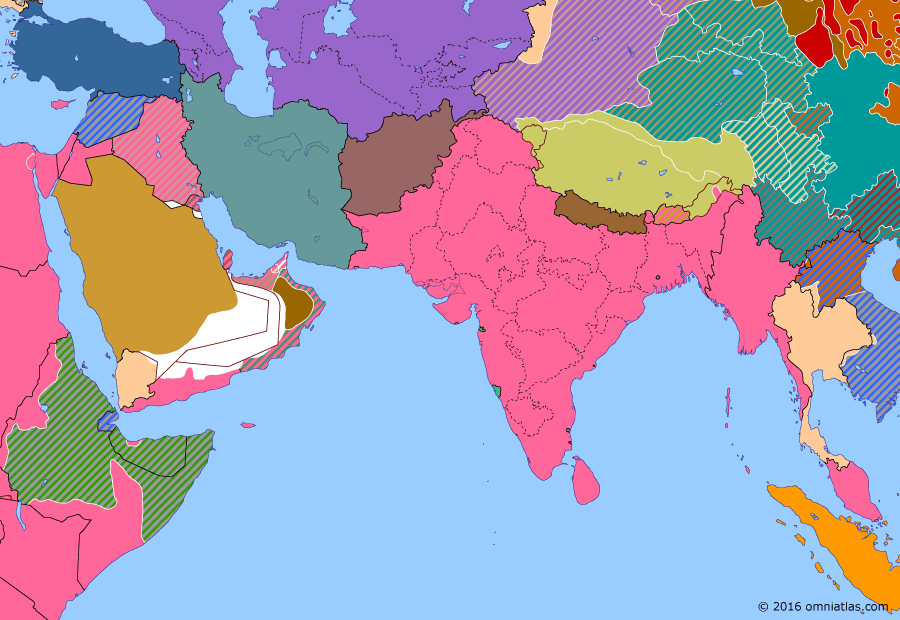 By 1941, Italy's attempt to build an empire in the Mediterranean had turned into a fiasco, further isolating Italian East Africa. In January the British invaded from both Sudan - into Eritrea and western Ethiopia - and Kenya - into southern Ethiopia and Somalia. On 25 February this latter force captured Mogadishu, allowing it to push across the Ogaden into eastern Ethiopia while additional British troops landed in Berbera and began the reconquest of British Somaliland.

The British 4th and 5th Indian Divisions under General William Platt reoccupied Kassala, Anglo-Egyptian Sudan, and invaded Italian-ruled Eritrea. After an initial victory at Agordat on 1 February, the British were held back by the Italian defenses among the formidable ridges and peaks around Keren. Keren finally fell on 27 March, allowing the British to capture the capital of Asmara a few days later—although the southern port of Assab would hold out until June.in wikipedia

On 20 January 1941 exiled Ethiopian Emperor Haile Selassie, accompanied by British troops, crossed the border from Anglo-Egyptian Sudan into Italian-controlled Ethiopia at Um Idla. He was supported in the north by the 9th Indian Brigade, which retook Gallabat and invaded Ethiopia, occupying the border town of Metemma on 31 January. Meanwhile to the south in Kenya, the 1st South African Division reoccupied Moyale and, on 30 January, launched a feint attack in the Mega region of southern Ethiopia.in wikipedia

Following a Japanese-sponsored “Conference for the Cessation of Hostilities”, the Vichy government of France signed a ceasefire with the Kingdom of Thailand aboard the Japanese cruiser Natori. A formal peace treaty was signed in Tokyo on 9 May, whereby France agreed to cede Battambang, Pailin, Siem Reap, Banteay Meanchay, Oddar Meanchey, Preah Vihear, and Xaignabouli to Thailand.in wikipedia