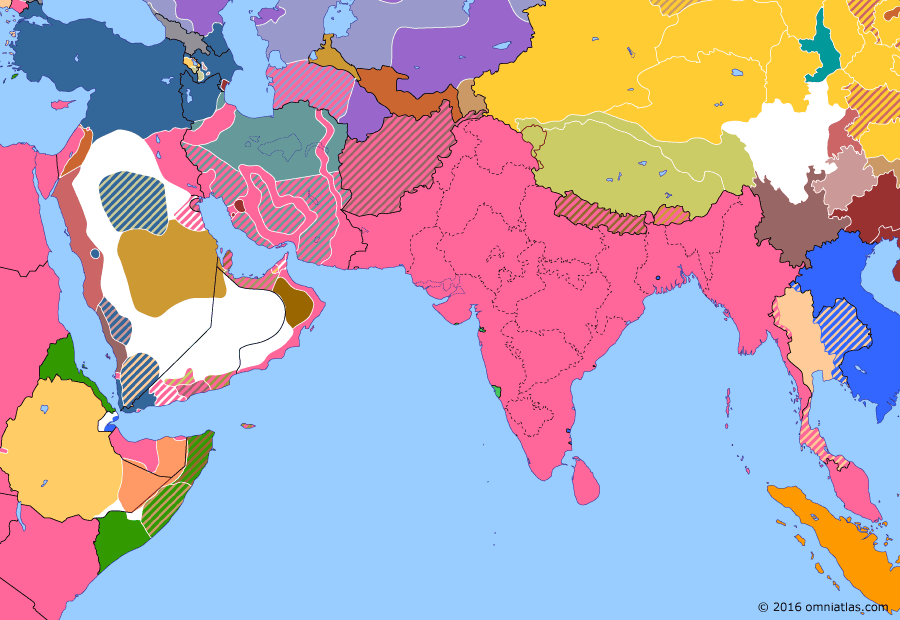 The long stand-off between the Allies and the Ottomans in Palestine was finally ended in September 1918 with the Battle of Megiddo. Advancing across the front, the British and Arab forces decisively defeated the Ottoman army, entering Damascus on 1 October. However these Anglo-Arab successes worried the French, who had been promised Syria by the British in the Sykes-Picot Agreement of 1916.

The second, deadly wave of the 1918 influenza pandemic reached Bombay, British India, in the second week of September (a first, less lethal wave had hit in June). Over its course, the disease would kill 13.8 million Indians in the British-ruled provinces, with an estimated death toll of up to 20 million overall—about 5% of the total population. The second wave hit Ceylon in October, killing some 300,000 there; in Persia—already suffering from famine and cholera at the time—there were probably over a million deaths.in wikipedia

On the night of 13/14 September, the Ottoman forces of the Islamic Army of the Caucasus begin their main offensive on Baku, Azerbaijan. Deciding the situation is hopeless, Lionel Dunsterville and his British defenders choose to evacuate the city for Anzali, Persia, on the night of the 14th. Ottoman forces enter Baku the next day.in wikipedia

In the last major Allied offensive of the Sinai and Palestine Campaign, the British Egyptian Expeditionary force under General Edmund Allenby attacked the Ottoman Yildirim Army Group along the Judean coast, in the Judean Hills in front of Nablus, and across the Jordan River towards Amman. The British were supported by Arab rebels, who raided the Ottoman railways and capture Daraa. The Allied victory all but destroyed the Ottoman army in the Levant, leaving the route to Damascus open.in wikipedia

After requesting a ceasefire on 24 September, the Bulgarian government signs the Armistice of Salonica (a.k.a. Thessalonica) with the Allied Powers, represented by French General Louis Franchet d’Espérey, in Thessaloniki, Greece. The armistice ends Bulgaria’s participation in World War I on the side of the Central Powers effective as of noon on 30 September.in wikipedia

At 0500, the Australian Mounted Division passes through Damascus, Ottoman Syria, to the Homs road, despite orders to wait for Faisal’s Sharifian Arab Army. The city has been empty of Ottoman troops since the previous day. T. E. Lawrence and the Arabs arrive shortly after at 0730, installing Shukri al Ayyubi as governor.in wikipedia

With the permission of British General Allenby, Emir Faisal announces the establishment of an independent Arab constitutional government in Damascus, Syria.in wikipedia