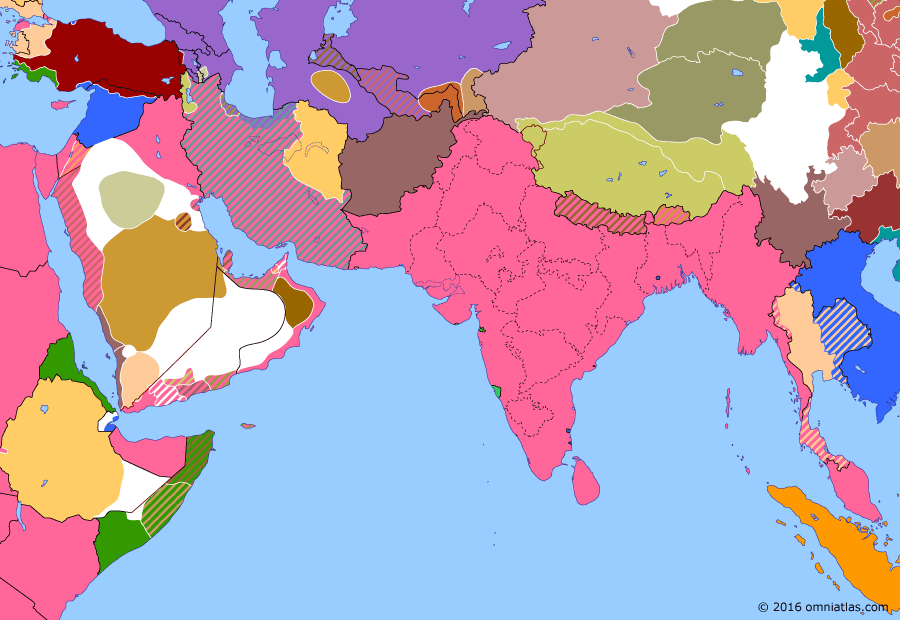 The growing power of Soviet Russia and the threat it posed to Persia, encouraged the British to support the overthrow of the weak Persian government. However the coup leader, Reza Khan, was not a British puppet. He swiftly signed a treaty with Soviet Russia and soon after renounced the Anglo-Persian Agreement. In the ensuing years he would crush the widespread opposition to his rule, establishing the Pahlavi dynasty in 1925.

Reza Khan leads the Persian Cossack Brigade into Tehran, capital of Persia, seizing control of the city and forcing the dissolution of the government. The 23-year old Ahmad Shah Qajar, the nominal ruler of Persia, is retained as a figurehead for another two years.in wikipedia

The Red Army of Soviet Russia enters Tbilisi, capital of the Democratic Republic of Georgia. In their wake, the Revkom headed by Mamia Orakhelashvili and Shalva Eliava proclaims the overthrow of the Menshevik government, the dissolution of the Georgian National Army and People’s Guard, and the formation of the Socialist Conciliar Republic of Georgia.in wikipedia

Persia and Soviet Russia sign the Russo-Persian Treaty of Friendship, cancelling the previous largely unequal treaties between the two countries. The Treaty gives both countries equal shipping rights in the Caspian Sea, reaffirms their mutual borders, and prohibits either state from hosting groups that will engage in activity against the other state.in wikipedia

British officials—the so-called ‘Forty Thieves’—met at Cairo to discuss Middle Eastern problems arising from the conflicting partition plans made during World War I and framed a common policy for the future. At the conference, it was agreed that the French should retain Lebanon and Syria and the British should keep their mandate over Palestine and support the establishment of a Jewish homeland there. Abdullah bin Hussein was to be given the part of the Palestine mandate east of the Jordan River—Transjordan—while Faisal was to be made king of Mesopotamia/Iraq. In Arabia, Hejaz and Nejd were recognized as separate British-supported kingdoms.in wikipedia

Soviet Russia and the Grand National Assembly of Turkey sign the Treaty of Brotherhood in Moscow, undertaking to establish friendly relations between the two internationally unrecognized countries after both came close to clashing over Armenia and Georgia. The Soviets recognize the Turkish claim to Kars, while the Turks recognize Batum as part of Soviet Georgia.in wikipedia