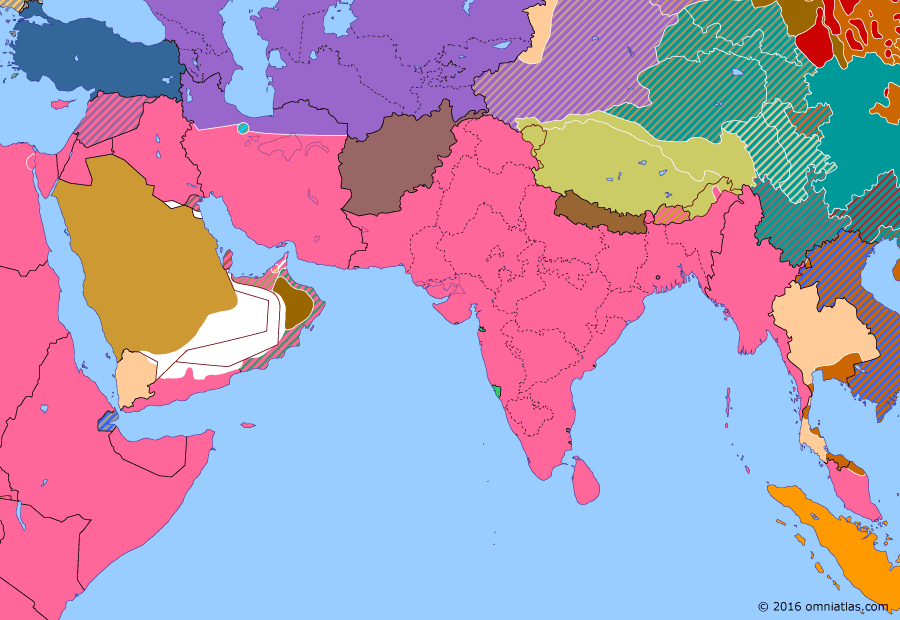 Japanese invasion of Thailand and Malaya

In July 1941 the Japanese moved into southern Indochina, prompting the US and Britain to freeze Japan's assets and cut off its oil supplies. Without oil, Japan faced the choice of either withdrawing from its conquests or invading the oil-rich East Indies and further provoking the US. It chose the latter course, simultaneously bombing the US Pacific Fleet at Pearl Harbor and moving south into Malaya and Thailand. British attempts to defend Malaya collapsed while Thailand quickly chose to side with the invaders.

Following the Anglo-Soviet invasion of Iran, Reza Shah is replaced by his more compliant son, Mohammad Reza, and the country divided into two zones of occupation with a nominally independent region around Tehran. On 1 October 1941 the United Kingdom and the Soviet Union sign the First Soviet Supply Protocol in Moscow—the first of a series of nine month protocols covering Allied aid to the Soviets. The so-called Persian Corridor across Iran is chosen as one of the three main supply routes, although it is initially only able to handle 6,000 tons of supplies a month.in wikipedia

British, Commonwealth, and Ethiopian forces converged on the mountain town of Gondar, Ethiopia, which was defended by 40,000 Italian troops under Generale Guglielmo Nasi. The Allies seized the two mountain passes to the town, attacking Gondar itself on 27 November. The Italians surrendered soon after, ending conventional resistance in Italian East Africa (although guerrilla warfare would continue into 1943).in wikipedia

At 23:00 on 7 December, Japan demands that Thailand allow entrance to the Japanese military, giving the Thai government two hours to respond. Several hours after the expiration of the ultimatum, the Japanese simultaneously invade Thailand from French Indochina and make landings south of Bangkok and along the Kra Isthmus. After initial fighting, Thai Prime Minister Phibun arranges a ceasefire at noon, agreeing to form an alliance with Japan on 14 December.in wikipedia

Just after midnight on 8 December 1941 (before the attack on Pearl Harbor—it is still 7 December in Hawaii), Japanese troops under Tomoyuki Yamashita land at Khota Baru, Malaya. Khota Baru is the Royal Air Force’s and Royal Australian Air Force’s base of operations in northern Malaya, but attempts to bomb the incoming Japanese transports fail to stop the Japanese landing three infantry battalions by noon. Outnumbered the British and Australians withdraw south.in wikipedia

Japanese land-based bombers and torpedo bombers of the Imperial Japanese Navy sink the British Royal Navy battleship HMS Prince of Wales and battlecruiser HMS Repulse off the east coast of British Malaya, near Kuantan. The British ships had been sent to intercept the Japanese invasion fleet north of Malaya.in wikipedia