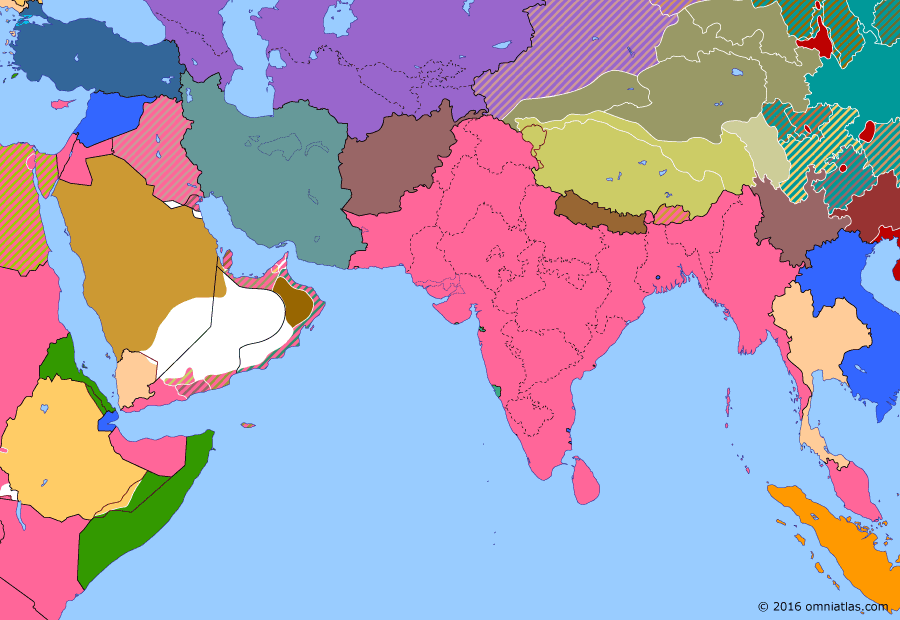 In the 1920s, Mussolini's Fascists had risen to power in Italy, adopting an increasingly aggressive foreign policy. In 1934 their expanding claims in Somalia led to a clash with Ethiopia, which brought the dispute to the League of Nations. However Mussolini secretly wanted an excuse to conquer Ethiopia and continuously rejected the League's attempts at arbitration.

After a Saudi ultimatum to Yemen to withdraw from the disputed Tihama territories of Jizan and Najran expired, Saudi forces invaded in April 1934. In May, they continued their attacks and occupied Al Hudaydah. The war was resolved that month by the Treaty of Taif, whereby Yemen formally ceded Jizan and Najran and accepted the Saudi annexation of Asir.in wikipedia

Units of the Chinese Communist Party’s Red Army, retreating from the Nationalist Government’s Fourth Encirclement Campaign, travel from a number of Communist enclaves in the south—most notably in the their stronghold in Jiangxi province—deep into the northwest in a series of marches which will collectively become known as the Long March. As the marches progress, crossing mountains and gorges in a circuitous 9,000 km path, Mao Zedong and Zhou Enlai emerge as the Communist leaders. By the time Mao reaches Yan’an Shaanxi province in October 1935, only 40,000 of an intial 300,000 party members remain.in wikipedia

Ethiopian and Italian Somali troops clashed at Walwal, an Italian fortified post deep inside the Ethiopian-claimed Ogaden. The following day, Emperor Haile Selassie of Ethiopia protested Italian aggression but was countered when Duce Benito Mussolini’s Italian government demanded an apology and compensation. The dispute was brought before the League of Nations, but not only did Italy continuously reject arbitration measures, it also began building up forces in East Africa.in wikipedia

The Italian colony of Eritrea and protectorate of Somalia were united to form the colony of Italian East Africa, with its capital at Mogadishu and Emilio de Bono as High Commissioner. Ethiopia would be added to the colony after its conquest the following year.in wikipedia