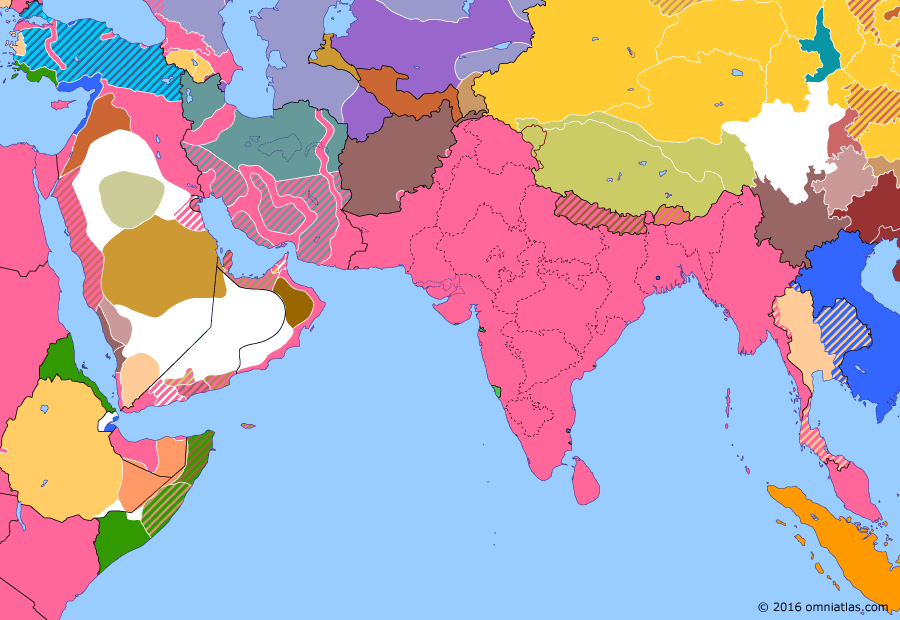 The unrest in India around the Amritsar massacre encouraged Afghanistan to assert itself against Britain. In May 1919 it invaded northern India, but was rapidly pushed back by the British. Nonetheless, in the ensuing peace treaty, Britain agreed to recognize Afghanistan as a fully independent state.

After a number of temporary landings starting on 28 March 1919, Italian troops disembarked at Antalya (which was called Adalia at the time), southwest Anatolia, in April, occupying Fethiye, Marmaris, and Bodrum soon after. The occupation was generally peaceful, with the Italians portraying themselves as pro-Turkish and avoiding conflict with the locals.in wikipedia

Afghan troops cross the frontier into British India, capturing the town of Bagh. The invasion is meant to coincide with an uprising in Peshawar, but is five days early. The British declare war on 6 May, invading Afghanistan to capture Fort Dakka and Spin Baldak, and bombing Afghan cities by air. Peace is concluded on August 8 at Rawalpindi, in which Britain agrees to recognize Afghanistan’s independence and end its subsidies to that country.in wikipedia

Greece lands forces in Smyrna, Ottoman Empire, in cooperation with the Allied powers. The troops are greeted by the substantially Greek local population, with the Ottoman garrison surrendering after a brief exchange of fire.in wikipedia