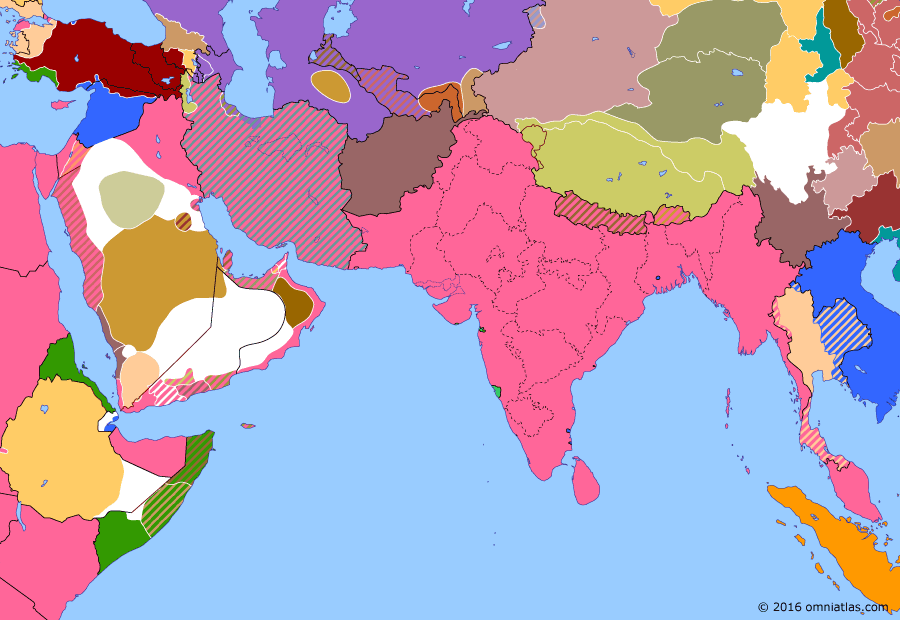 25 Sep 1920Treaty of Seeb ends
conflict between
Oman & the Imamate

The Treaty of Sevres granted Armenia a large swathe of eastern Anatolia as reparation for the Ottoman Empire's persecution of the Armenians during World War I. However this territory was now under the control of the Turkish Nationalists, who invaded the Republic of Armenia itself in September. Facing the prospect of Turkish occupation, the Armenians were forced to renounce their claims under Sevres on December 3. The following day, Soviet troops, who were already invading from Azerbaijan, entered Yerevan, bringing Armenia's independence to an end.

Red Army troops from Soviet Russia, led by Mikhail Frunze, attack Bukhara, capital of the Emirate of Bukhara, with the support of Young Bukharan activists. On 31 August, Emir Alim Khan flees to Dushanbe in eastern Bukhara, where a rival Emirate is set up. The Emir’s citadel in Bukhara falls to the Red Army two days later, leading to the proclamation of the Bukharan People’s Soviet Republic the following month.in wikipedia

Turkish Nationalist forces cross into the Republic of Armenia in a surprise offensive, capturing Kars by the end of October and Alexandropol on 7 November. With their capital of Yerevan under threat and Soviet Russians invading from Azerbaijan, the Armenians sues for peace. At the Treaty of Alexandropol on December 3 they agree to cede Kars to Turkey and renounce their claims to Wilsonian Armenia.in wikipedia

The Sultanate of Muscat and Oman, under Sultan Taimur bin Feisal, signs the Treaty of Seeb with the Imamate of Oman, recognizing the autonomy of the Imamate within Muscat and Oman. The Treaty eases tensions between the two polities and allows Britain to withdraw its garrison from Oman.in wikipedia