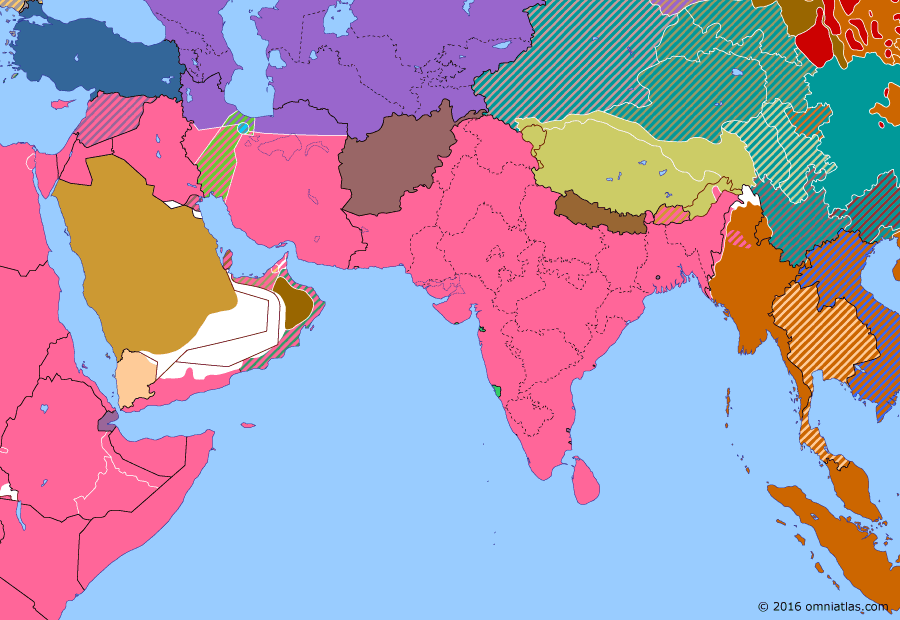 Jan–May 1943US takes over operation
of Persian Corridor

In late 1942 the British attempted to reconquer the Arakan region of Burma, but they made little headway before being pushed back by the Japanese. They did better further north, where the irregular British 'Chindits' made successful raids through the jungle behind Japanese lines. However, just as these expeditions were coming to a close, famine—induced by the pressures of war and British mismanagement—erupted in nearby Bengal, leading to millions of Indian deaths.

In late October 1942 the British Eighth Army under General Bernard Montgomery launched an all-out attack on Axis forces west of El Alamein, Egypt. After several days of heated battle, the Allies mounted Operation Supercharge early on the morning of 2 November, breaking through the Italo-German defenses and sending them into flight. However, despite suffering up to 59,000 casualties to the Allies’ 13,560, the Axis managed an orderly retreat under Field Marshal Erwin Rommel.in wikipedia

The British 14th Indian Division advances from British India into the Arakan region of Japanese-occupied Burma, occupying Maungdaw. The Japanese withdraw to the Mayu River, north of Akyab, where they successfully repel British attacks from 7 January to 3 February 1943. In March, Japan counterattacks, recapturing Maungdaw on 14 May and pushing the British back to the border.in wikipedia

In the wake of Axis attacks on the Arctic convoy route in 1942, the United States agrees to take over operational control of the Persian Corridor in Iran from the British in order to provide an adequate alternate route of delivering supplies to the Soviet Union. The US operation of and expansion of the facilities of the corridor see aid increase from 51,000 tons in January 1943 to a peak delivery of 282,097 tons in July 1944.in wikipedia

On 31 January Soviet forces advancing on the remaining German positions in Stalingrad reach the headquarters of German Field Marshal Friedrich Paulus, commander of the Sixth Army, in the southern pocket and capture him. Two days later,on 2 February, the remainder of the Sixth Army under General Strecker surrenders to the Soviets, ending organized Axis resistance in the city.in wikipedia

In Operation Longcloth, Orde Wingate’s 3,000-man 77 Indian Infantry Brigade—who Wingate dubs the ‘Chindits’ (a mispronunciation of the Burmese word for ‘lion’)—crosses the Chidwin River from British India into northern Burma. From here they demolish several railway bridges between Indaw and Mandalay while attempting to avoid the Japanese occupying forces. After two months of harassing attacks, the 2,182 surviving Chindits withdraw to India in late April.in wikipedia

Following the Japanese seizure of rice-exporting Burma, the British Indian province of Bengal suffers from an acute food shortage. A standoff between the government of India and the provincial governments, exacerbated by British prioritization of the war effort, prevents vital supplies being sent to Bengal in time, resulting in widespread famine. Some 1.5 to 4 million will die from starvation, malnutrition, and disease before the crisis is brought to an end.in wikipedia