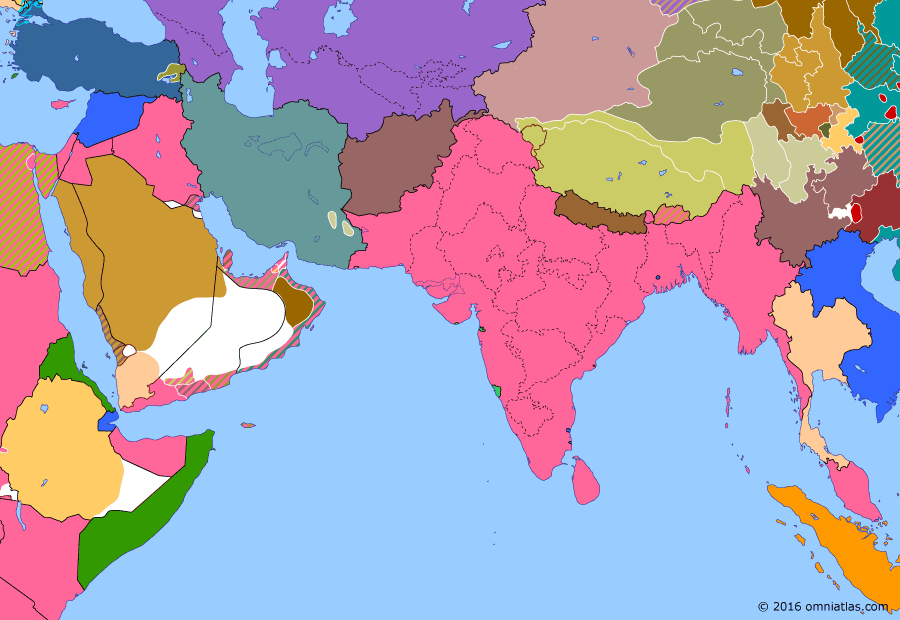 In late 1929 the Indian National Congress decided to push for the complete end of British rule, declaring 26 January 1930 as India's Independence Day. Under the leadership of Mohandas Gandhi, Congress's next move was to dispute the restrictive British salt tax, with Gandhi marching to the sea to make his own salt with seawater - an illegal action. As expected, the British arrested Gandhi, but his march encouraged large scale acts of civil disobedience across the country and brought worldwide attention to India's independence movement.

Between opening on 24 October 1929 (“Black Thursday”) and close on 29 October (“Black Tuesday”), the Dow Jones Industrial Average dropped in value from 305.85 to 230.07 in the most devastating stock market crash in United States history. The crash would bring an abrupt end to the Roaring Twenties and signal the beginning of the Great Depression.in wikipedia

The Indian National Congress promulgates the Declaration of the Independence of India, resolving to fight for Purna Swaraj—complete independence and self-rule for India. The promulgation follows Congress President Jawaharlal Nehru’s hoisting of the new flag of India in Lahore on New Year’s Eve 1929, and leads to 26 January being regarded as India’s Independence Day until official independence in 1947.in wikipedia

Indian nationalist Mohandas Gandhi marches 390 km from Sabarmati Ashram, in Gujarat in British India, to the coastal village of Dandi in order to produce salt from seawater as an act of protest against the British tax on salt production and ban on local sea-salt reclamation. His act triggers large scale acts of civil disobedience against the salt laws by millions of Indians, leading to the jailing of Gandhi and over 80,000 others, but draws worldwide attention to the cause of Indian independence.in wikipedia

Protesters demonstrate in Peshawar, British India, in response to discriminatory laws and the British arrest of Ghaffar Khan, leader of the Khudai Khidmatgar—an order of non-violent resistance. British and Indian troops moving in to restore order clash with a large crowd of Khudai Khidmatgar followers gathered at the Qissa Khwani bazaar. When the unarmed crowd refuses to disperse, the British open fire with machine guns, leading to the deaths of nearly 400 people.in wikipedia