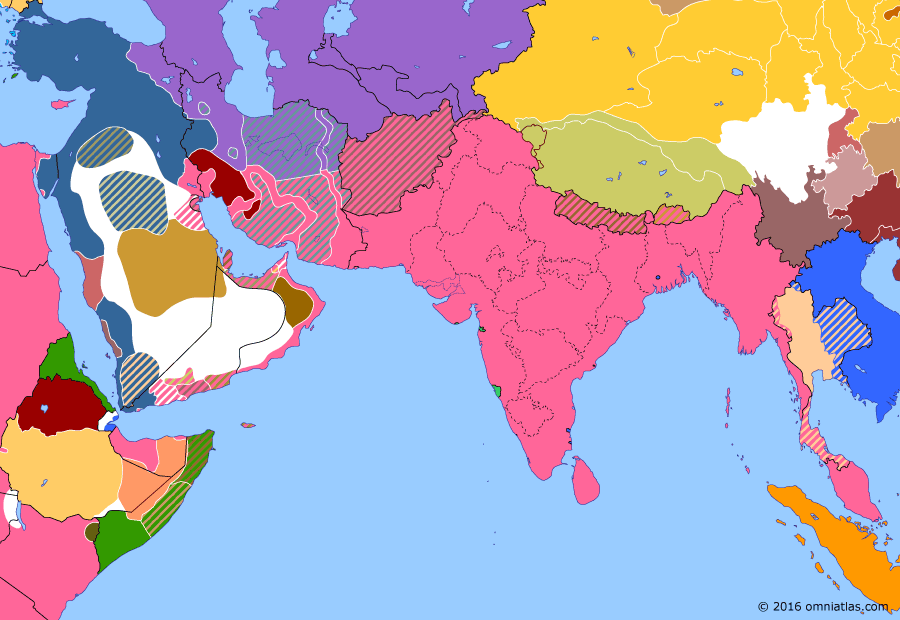 Back in Persia, the Ottomans had rolled back the Russian offensive and taken Hamadan. However the British were finally prepared - they had just formed their own 'Persia force' from local recruits. In July they marched out of Kerman with these South Persia Rifles, crossing the interior to Isfahan and Shiraz. South Persia had been secured for the Allies.

British Brig. Gen. Sir Percy M. Sykes leads the newly formed South Persia Rifles out from Kerman, reaching Russian-occupied Isfahan on September 11. From here he proceeds to Shiraz, which is already under the control of a pro-British governor-general, cementing British power in South Persia.in wikipedia

Ottoman and German troops led by German General Friedrich Freiherr Kress von Kressenstein attack British and Anzac forces near Romani on the Sinai Peninsula. Von Kressenstein is repelled, ensuring the safety of the Suez Canal, and is pursued to Bir el Abd by the Anzacs.in wikipedia

The Council of State and the Ethiopian Orthodox Tewahedo Church deposed de facto Emperor ‘Lij’ Iyasu V in favor of Zewditu, eldest daughter of late Emperor Menelik II. Zewditu was crowned Queen of Kings, a modification of the traditional ‘King of Kings’, while her cousin Ras Tafari Makonnen (later Haile Selassie) was appointed regent. Lij Iyasu fled north and led a rebellion which lasted until August 1917.in wikipedia