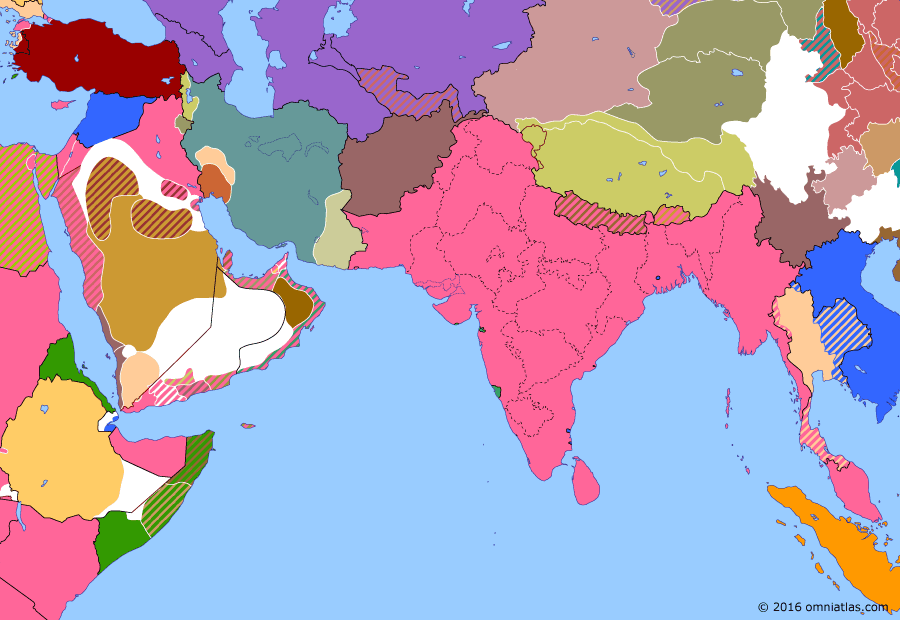 After their 1921 defeat of the Greek invasion at Sakarya, the Turks slowly gathered their forces for their counterattack. In late August 1922 they were ready, smashing the Greeks at Dumlupinar and driving them back to the sea in just a few weeks. On 8 September, the Greeks evacuated Smyrna, leaving the city for the Turks to capture the following day.

The Sheikh of Mohammerah Khaz’al al-Ka’bi leads a rebellion in Khuzestan against Reza Khan of Persia. He is joined by the Bakhtiari Sheikhdoms, who attack the Persian government forces as they pass through their territory to Khuzestan.in wikipedia

Ikhwan based in the Saudi Sultanate of Nejd make a number of raids on the British-dependent Emirate of Transjordan, send several thousand men to attack villages to the south of Amman and massacre the villagers. The raids threaten the position of Emir Abdullah, but are dispatched with the aid of British armored cars and aircraft.in wikipedia

Enver Pasha, leader of the rebel Basmachi movement (Bek) in the Ferghana Valley (in what will become Tajikistan), is killed in a cavalry charge against the invading Red Army of the Russian Soviet Federative Socialist Republic. His successor, Selim Pasha, attempts to continue the struggle but is finally forced to flee to Afghanistan in 1923.in wikipedia

The Turkish First and Second Armies mount simultaneous attacks on the Greek front line in central Anatolia. Facing a Turkish breakthrough, the Greeks retreat towards Dumlupinar and Alioren, but are forced to evacuate on 30 August in response to further Turkish assaults. The result is a rapid Greek abandonment of the interior as they flee to the coast.in wikipedia

After several revolts against British control of Iraq, the Kurds of Sulaymaniyah declare the independence of the Kingdom of Kurdistan under King Mahmud Barzanji.in wikipedia