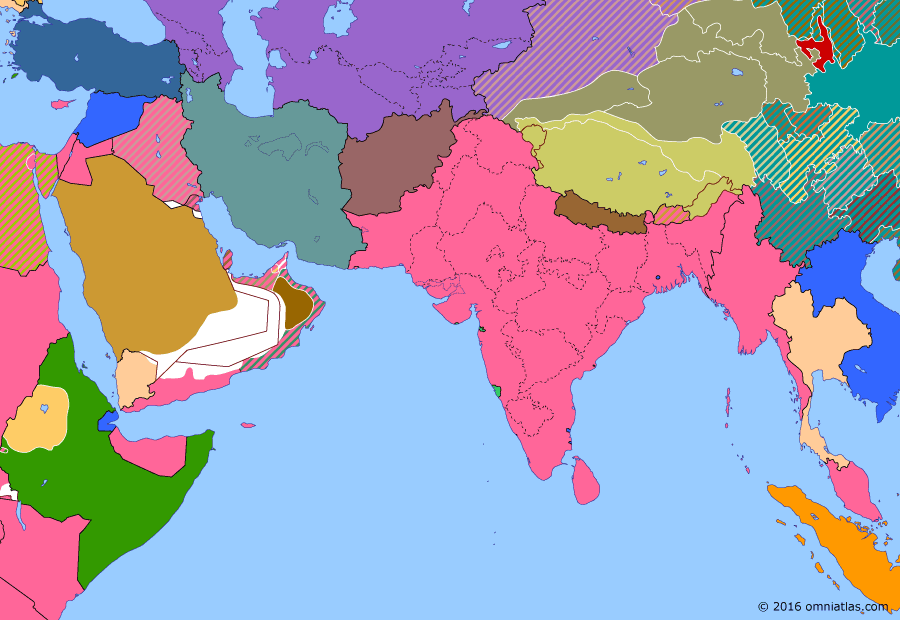 The growth of the Indian Independence Movement in the 1930s pushed Britain to reform the way it governed India. In 1935 it passed the Government of India Act, which increased Indian rights, enabled provincial elections, and separated Aden and Burma from India. The act became fully active in April 1937, by which time the Indian National Congress had been voted into 8 of the 11 provinces.

In accordance with the Government of India Act 1935, provincial elections are held in the British Indian Empire in all eleven provinces (excluding Aden, Burma, and the various Indian protectorates and agencies). As a result of the elections, the Indian National Congress, under Jawaharlal Nehru, wins 707 seats and gains power in Assam, Bihar, Bombay Presidency, Central Provinces, Madras Presidency, North-West Frontier Province, Orissa, and United Provinces. It’s closest rival, the All-India Muslim League of Muhammad Ali Jinnah, wins only 106 seats and fails to secure the remaining provinces (Bengal, Punjab, and Sind).in wikipedia

Harold Ingrams, the first British political officer in Al Mukalla, capital of the Qu’aiti Sultanate of Shihr and Mukalla in the Hadhramaut, brokered a peace between the Qu’aiti Sultanate and its rival, the Kathiri Sultanate of Seiyun. The peace was financed by Sayyid Abu Bakur of Tarim, who was intent on building a motor road from Tarim to the port of Shihr, and established some stability in the Hadhramaut.in wikipedia

In response to Turkification laws and forced relocation by the Turkish government, Kurdish tribesmen led by Seyid Riza rebel in the Dersim region in eastern Turkey. The Turkish authorities retaliate by sending in 25,000 troops accompanied by bombers. Seyid Riza and his followers are executed in November 1937, with further reprisals killing over 10,000 Kurds.in wikipedia

Under the Government of India Act 1935, Aden Province is detached from the British Indian Empire to become the Colony of Aden, a separate British Crown Colony. The new colony consists of the port of Aden and its immediate surroundings, plus the islands of Kamaran, Perim, and Kuria Muria.in wikipedia

Under the Government of India Act 1935, Burma Province was separated from the British Indian Empire to become the new Colony of Burma. The colony was granted a new constitution calling for a fully elected assembly, with Ba Maw acting as Deputy Chairman of the Executive Council.in wikipedia