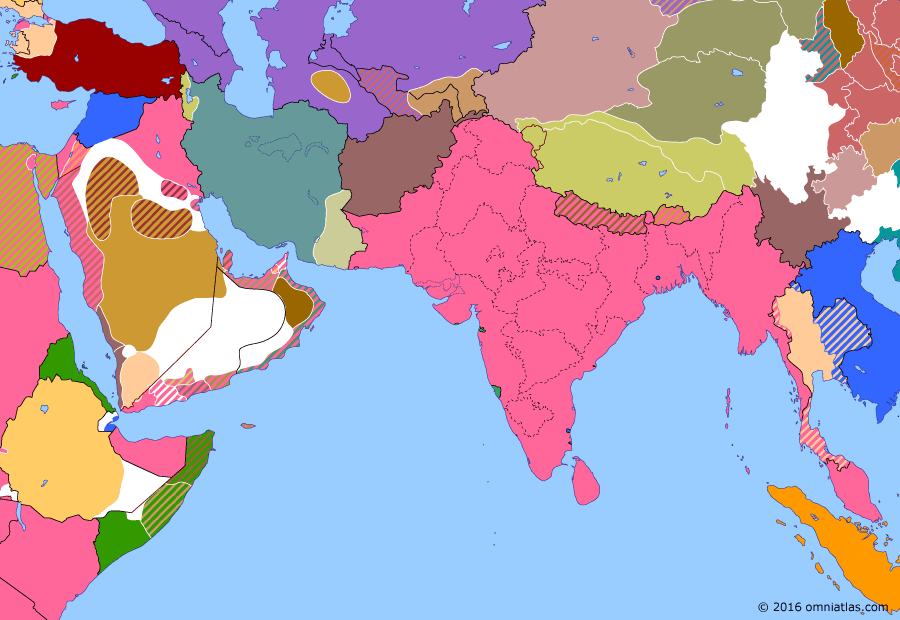 Since its foundation in 1902, the Saudi state in Nejd had grown to cover much of the Arabian interior. In 1922, the Saudis conquered their long-time Rashidi rivals in Ha'il, leaving only British-backed states in their neighborhood. The fanatical Ikhwan militia, who had so far supported the Saudis, wanted to carry the war into these states, mounting raids on Kuwait, Iraq, and Transjordan, but were restrained by Ibn Saud, who was wary of provoking the British.

Soviet forces withdraw from the Persian Socialist Soviet Republic in Gilan, allowing the Persian army of Reza Khan to occupy Rasht and crush Mirza Kuchik Khan’s independence movement. Mirza flees to the Khalkhal Mountains, where he dies of frostbite in early December.in wikipedia

France and the Grand National Assembly of Turkey signed the Franco-Turkish Agreement at Ankara, Turkey, bringing an end to the Franco-Turkish War. The treaty redefined the Syria-Turkey border, ceding large areas of the Aleppo and Adana vilayets to Turkey, and gave the sanjak of Alexandretta in Syria a special status to acknowledge its significant Turkish population.in wikipedia

A large group of Non-Cooperation Movement protesters gathered at Chauri Chaura, in the United Provinces in British India, turn to violence, prompting the police to open fire. In retaliation, the protesters set fire to a police station, killing all its occupants. Some 22-23 policemen and 3 civilians die in total, prompting the Indian National Congress to halt the Non-Cooperation Movement 8 days later.in wikipedia

The government of the United Kingdom of Great Britain and Ireland issued the Unilateral Declaration of Egyptian Independence, ending its protectorate over Egypt and granting the country nominal independence with the exception of four “reserved” areas: foreign relations, communications, the military, and the Anglo-Egyptian Sudan.in wikipedia

Ikhwan Mutayr tribesmen from the Sultanate of Nejd raid Abu Ghar, in the Kingdom of Iraq—one of a number of raids they have made against the British dependencies of Iraq and Kuwait. The British respond with RAF strikes, prompting the Saudi rulers of Nejd to reign in the Ikhwan and negotiate the Treaty of Mohammera, dividing the tribal areas between Iraq and Nejd.in wikipedia

Following the proposal of Soviet ruler, Vladimir Lenin, the Armenian, Azerbaijani and Georgian Soviet Socialist Republics were united into the Federative Union of Socialist Soviet Republics of Transcaucasia.in wikipedia