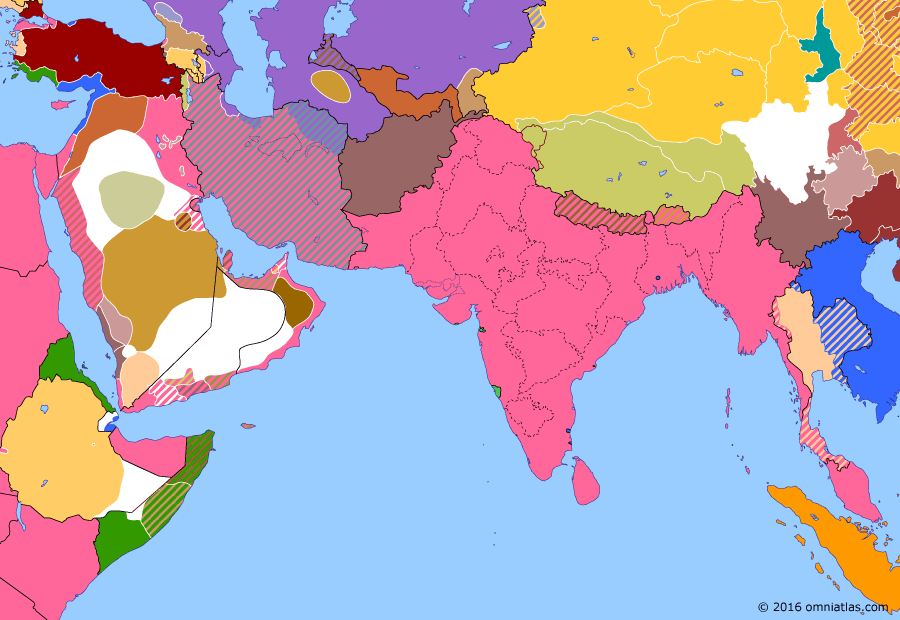 In 1919 the Soviets defeated the rival White movement in Siberia, allowing them to reconnect with their isolated allies in the Turkestan ASR. The following year they moved south across Central Asia and around the Caspian Sea into Azerbaijan. By May they were in northern Persia, where they helped establish a Soviet Republic in Gilan.

Indian nationalist Mahatma Gandhi persuades the Indian National Congress to pursue non-cooperation in a nation-wide protest after the failure of the Khilafat Movement. For two years, many Indians peacefully refuse to work in offices, factories, police, or government services and boycott public transportation and British-manufactured goods. The movement is a shock to the British and encourages Indian nationalism.in wikipedia

In January 1920 the British mounted their final expedition against the Dervish State of Mohammed Abdullah Hassan (who they nickname the ‘Mad Mullah’) in the south of British Somaliland. The King’s African Rifles, the Somaliland Camel Corps, and 12 aircraft of the Royal Air Force defeated Hassan’s Dervishes and captured their capital of Taleh. Hassan fled into the Ogaden, where he would die of influenza in December.in wikipedia

Invading Soviet forces, anti-monarchists, and Turkmen tribesmen force the abdication of Sayid Abdullah, last Kungrad khan of the Khanate of Khiva. In the place of the Khanate, the Khorezm People’s Soviet Republic is declared.in wikipedia

In response to the increasing collaboration between the Ottoman Parliament and the Turkish Nationalists, British troops occupy key buildings and arrest nationalists in Constantinople, capital of the Ottoman Empire. The parliament meets one last time on March 18 in protest, before being dissolved by the Sultan the following month.in wikipedia

Local Bolsheviks, led by Mirza Davud and Nariman Narimanov, and invading Soviet Russian troops of the 11th Red Army force the capitulation of the government of the Azerbaijan Democratic Republic. In its place, the Azerbaijan Soviet Conciliar Republic is declared.in wikipedia

The Soviet Caspian Fleet enters the port of Anzali, in Gilan in northwest Persia, in pursuit of Russian vessels and ammunition taken there by the White Russian counter-revolutionary General Denikin, prompting the British garrison to evacuate to Manjil. On June 5, the Soviets support Mirza Kuchik Khan in establishing the Persian Socialist Soviet Republic in Gilan.in wikipedia

Ikhwan under Faisal al-Duwaish from the Saudi Sultanate of Nejd invade the British-backed Sheikhdom of Kuwait, defeating the Kuwaitis at the six day Battle of Hamdh. From here, the Ikhwan attack the Red Fort at Al Jahra, but are repelled when Kuwaiti reinforcements and British support arrive, bringing a negotiated end to the conflict.in wikipedia