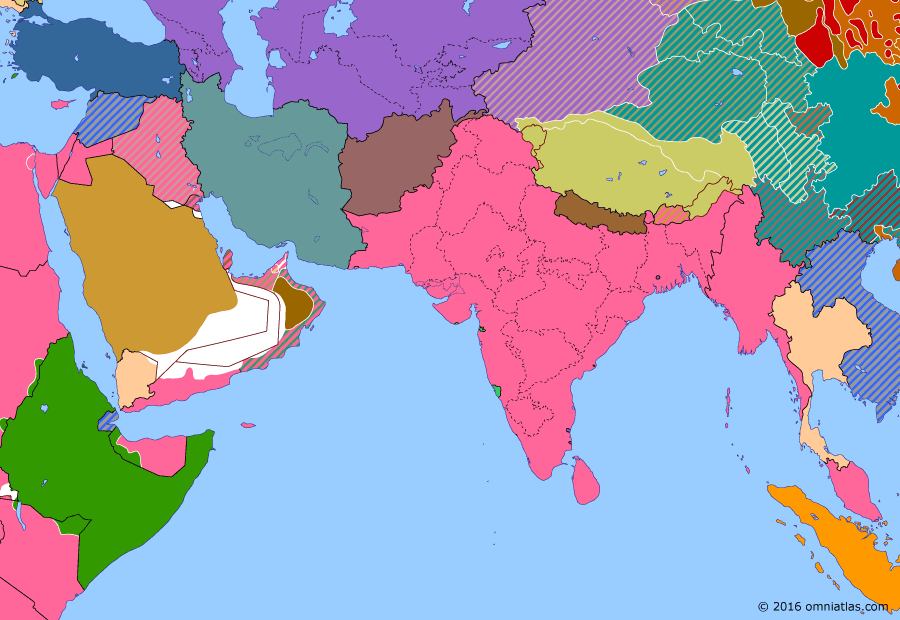 The Second World War did not start well for the Allies, with Germany defeating France in June 1940 and Italy entering the War in the same month. The armies of Italian East Africa immediately set about invading the British territories of Sudan and Kenya, but lack of resources meant their only major success was to conquer the much smaller colony of British Somaliland in August.

Encouraged by Lord Linlithgow, the Viceroy of the British Indian Empire, Muhammad Zafarullah Khan writes a resolution calling for the separate independence of a state composed of the Muslim-majority North Western and Eastern Zones of India. The All-India Muslim League adopts the resolution at its three-day conference in Lahore on 22-24 March 1940, with the name ‘Pakistan’—from the northern British Indian regions of Punjab, Afghania, Kashmir, Sind, and Baluchistan—generally being accepted as the name of the proposed state.in wikipedia

Holding that Germany would soon defeat the Allies, Benito Mussolini declared Italy’s entrance into World War II, effective as of midnight 10/11 June 1940. The Italian government presented the declaration to the British and French ambassadors in Rome shortly after 16:30, with Mussolini informing the Italian public later that day.in wikipedia

Adolf Hitler and top military officials of Nazi Germany signed an armistice with representatives of the French Third Republic at 18:36 near Compiègne, France—the exact location of the 1918 armistice ending World War I. This new armistice ended French involvement in World War II on the side of the Allies and established a German zone of occupation in northern and western France, leaving the remainder (“Vichy France”) to be governed by the French.in wikipedia

Three Italian columns advancing from Italian East Africa converge on Kassala, across the border in Anglo-Egyptian Sudan, at 03:00. After initial resistance by the Sudan Defence Force, the Italians capture the town. After also occupying Gallabat and Kurmuk, the Italians end their offensive in the Sudan for lack of fuel.in wikipedia

Italian forces from Italian East Africa, advancing into the British colony of Kenya, capture Fort Harrington in Moyale. By the end of the month, they will have marched almost 100 km into Kenya and occupied Buna and Dabel. However, lack of supplies will prevent any further Italian conquests and these gains will be lost by February 1941.in wikipedia

Yielding to Japanese diplomatic pressure, the United Kingdom closes down the Burma Road as a route of supplies to Nationalist China (at war with Japan since 1937). The closure lasts for three months and is conditional on a Japanese commitment to peace with China.in wikipedia

Some 24,000 Italian troops from Italian East Africa invade British Somaliland, defended by around 4,000 British and native troops. The British fight a delaying action over two weeks before being evacuated from the port of Berbera by the Royal Navy.in wikipedia