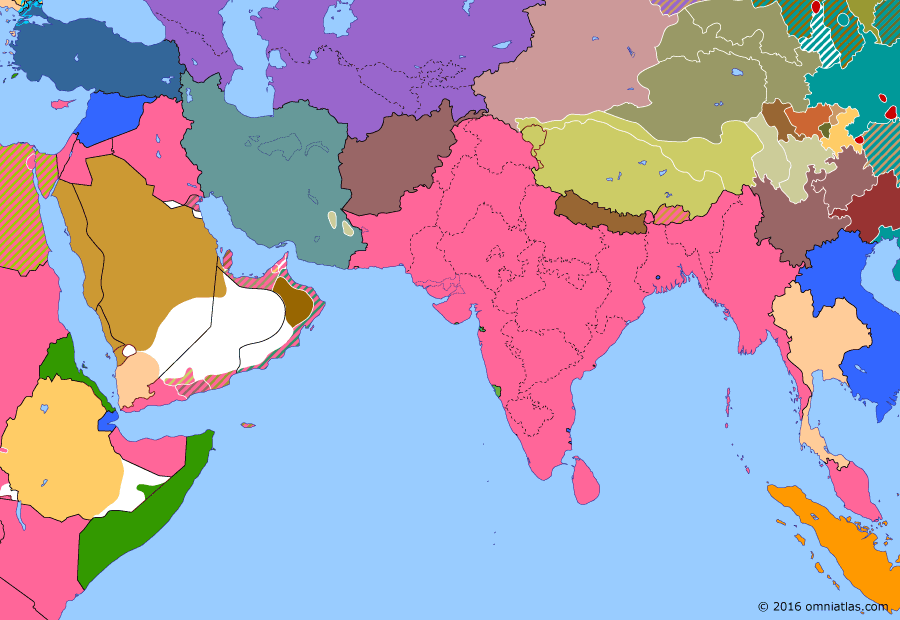 By the early 1930s, Chiang Kaishek's Nationalists had reunified much of China, encouraging the remaining warlords to side with him. Tibet, whose independence remained unrecognized, soon came into conflict with some of these warlords when it asserted its claim to monasteries on its eastern border. The warlords defeated the Tibetans, eventually agreeing to a truce in 1932.

Three Chinese military commanders—Feng Yuxiang of the Guominjun, Yan Xishan of Shanxi, and Li Zongren of the Guangxi clique—revolt against Chiang Kaishek’s dominance of the Kuomintang, the governing party of the Republic of China, leading to the Central Plains War. After months of fighting, Zhang Xueliang of the Fengtian clique declares for Chiang on 18 September and marches south, helping to crush the rebel warlords.in wikipedia

Following disputes over the control of monasteries between pro-Tibetan lamas and pro-Chinese chieftains, the Kingdom of Tibet under the 13th Dalai Lama seizes Kanze and Nyarong—at the time controlled by Xikang’s warlord, Liu Wenhui. After several more clashes, Liu retakes the settlements, invading eastern Tibet with the support of Ma Bufang of Qinghai. This leads to a British-arranged truce in October 1932.in wikipedia

During the Ararat rebellion, the Turkish Army destroys over 200 villages and massacres up to 15,000 Kurdish residents in the Zilan Valley, to the north of the town of Erciş in Van Province. The massacre does not end the rebellion, which continues into September 1930.in wikipedia

Indian nationalist Mohandas Gandhi signs a political agreement with Lord Irwin, Viceroy of India, after eight meetings totaling 32 hours. Gandhi agrees to discontinue the civil disobedience movement in return for the British Government’s pledge to release all non-violent political prisoners, end its ban on the Indian National Congress, and relax the Salt Laws. Gandhi is also designated as Congress’s representative to the Round Table Conference in London, set for August 1931.in wikipedia