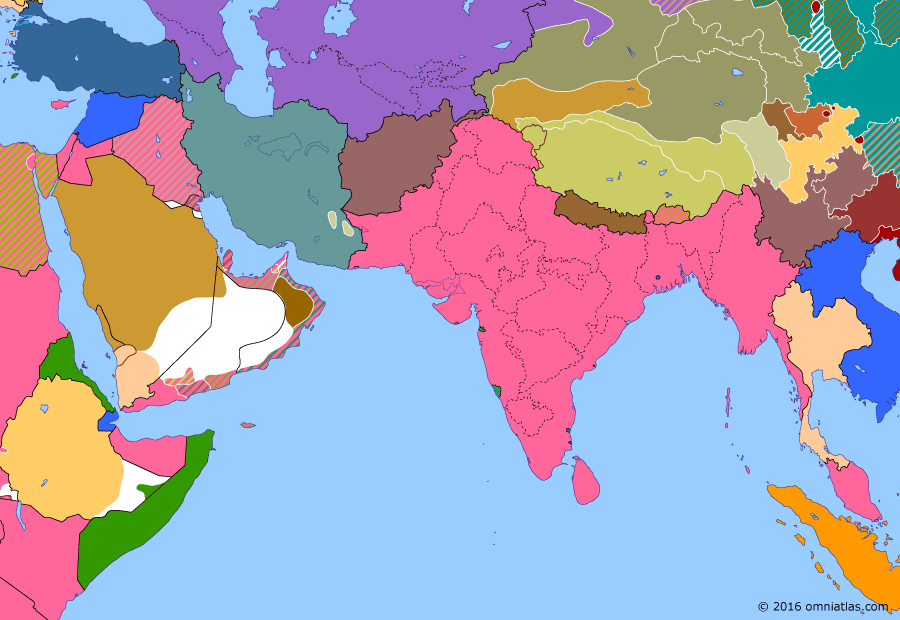 The 1933 invasion of Xinjiang by the Nationalist Chinese-allied Ma family alarmed the Soviet Union, which responded by mounting its own invasion of the province to support its besieged governor. With the help of their modern army, the Soviets expelled the Ma, effectively turning Xinjiang into a satellite state.

Volunteer Soviet troops and White Guards begin intervening in Xinjiang, China, to relieve the siege of Xinjiang’s governor Shen Shicai in Urumqi by the Kuomintang-allied forces of Zhang Peiyuan and Ma Zhongying. When these troops prove unsuccessful, two brigades of about 7,000 Soviet OGPU troops invade, supported by tanks, aircraft, and artillery with mustard gas. Breaking through at Kulja and Chuguchak, they defeat Ma after several weeks battle on the frozen Tutung River outside Urumqi. A further defeat at Dawan Cheng drives Ma south to Kashgar, after which most of the Soviet forces withdraw.in wikipedia

While Ma Zhongying is holding out against the Soviet invasion of Xinjiang, he dispatches 800 troops under Ma Fuyuan towards the Turkish Islamic Republic of East Turkestan (TIRET). Ma Fuyuan defeats Hoja-Niyaz at Aksu before proceeding to break through to Ma Zhanchang in Kashgar New City, repelling the much larger East Turkestani army. The TIRET government flees to Yangi Hissar and then Yarkant, where, despite support from Afghan volunteers, it is overthrown.in wikipedia

The government of Yemen signs a treaty of friendship and amity with the British representative in Aden, with both sides coming to an understanding over Aden. Under the terms of the treaty, the border between Yemen and the Aden Protectorates is agreed and Britain guarantees the independence of Yemen for forty years.in wikipedia