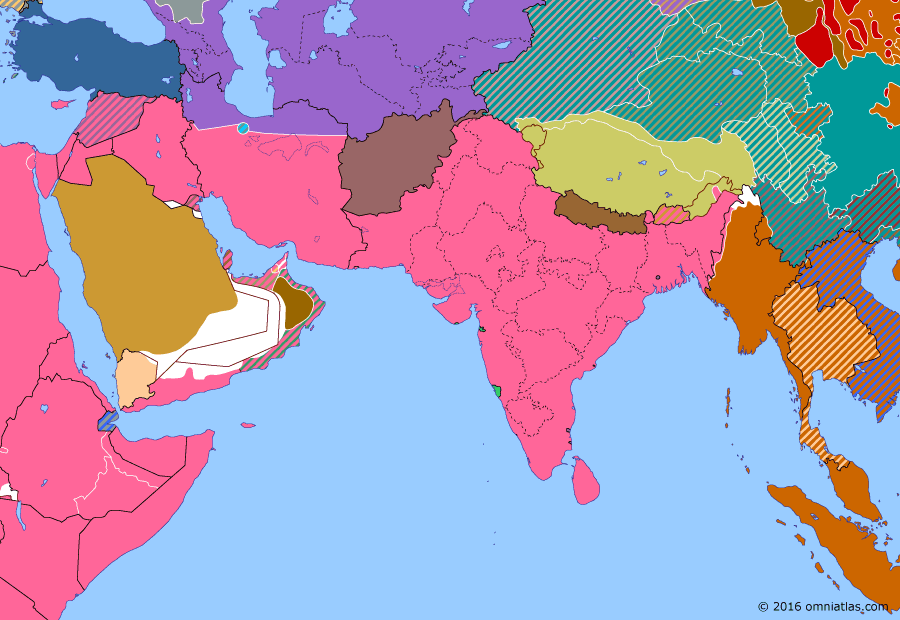 The Japanese raid into the Indian Ocean and their conquest of Burma brought the Second World War to the very borders of India. Alarmed by the inability of the British to defend their empire, the Indian National Congress launched the Quit India Movement, demanding immediate independence. The British responded by quickly arresting Congress leaders, but outbreaks of rioting and disorder would persist for the rest of the war.

Under threat of being cut off by the Japanese invasion of Burma, the British Burcorps destroys the oil fields and refineries at Yenangyaung before being extricated with the aid of the Chinese 38th Division. This small victory does little to stop the Japanese, who capture Lashio, cutting the Burma Road, on 29 April and seize Mandalay on 1 May. However the onset of the monsoon on 12 May ends the Japanese pursuit, allowing the British and Chinese to escape across the border into Assam, India.in wikipedia

In Operation Ironclad, British troops land on northern tip of Vichy French Madagascar, occupying the port of Diego Suarez to prevent its use by the Japanese. After several months holding that position, they launch Operation Streamline Jane on 10 September, advancing to occupy the rest of the island. The last Vichy French forces on Madagascar surrender on 5 November.in wikipedia

The Germans began Case Blue, their great Summer Offensive of 1942, by advancing on Voronezh and Rostov, along the Don River in Soviet Russia. After securing the lower Don in July, they swept across southern Russia, moving on Stalingrad and the Volga in the north and the oilfields of the Caucasus in the south. However by late August they had lost their momentum, facing difficulties across the front—especially in their attempt to capture Stalingrad.in wikipedia

In Bombay, British India, the Indian National Congress ratifies a resolution demanding the immediate British withdrawal from India. That day Mohandas Gandhi delivers a speech at the Gowalia Tank Maidan, launching the ‘Quit India’ movement and calling for passive resistance. The British authorities respond by arresting Gandhi and the Congress leaders within hours of the speech, but disorder and demonstrations will continue across the country until independence in 1947.in wikipedia

Believing that Germany is about to defeat the Soviet Union, Sheng Shicai, the warlord of Xinjiang, expels his Soviet advisors. On 5 October 1942 Xinjiang is officially reincorporated into the Nationalist Chinese fold following negotiations that began in March.in wikipedia