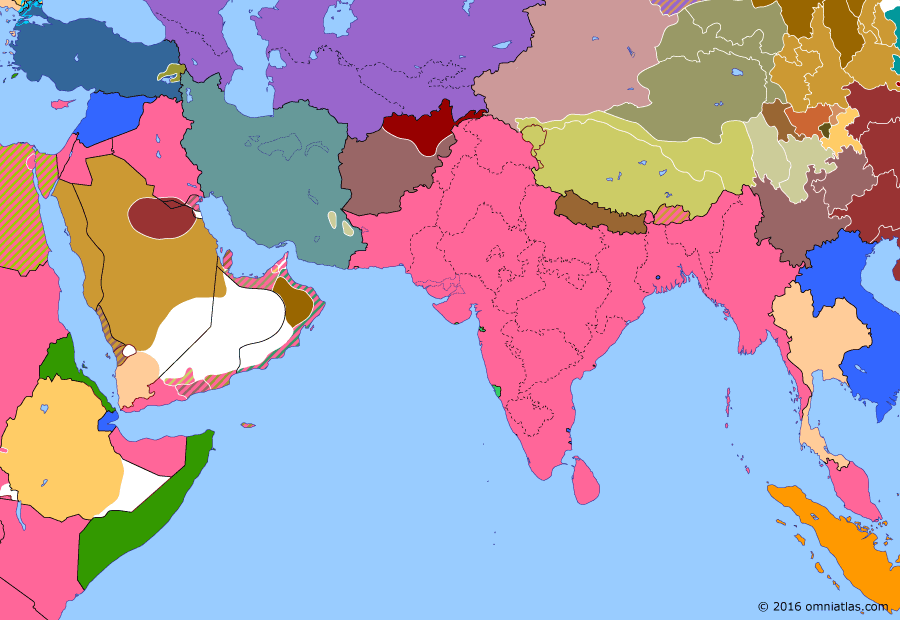 Apr–Aug 1928Bardoli Satyagraha
forces govt to back
down in Gujarat

The Saudi conquests in Arabia had been achieved with the support of the Ikhwan tribal armies, who wanted to go on to attack the British protectorates of Iraq, Kuwait, and Transjordan. Not wishing to antagonize the British, Ibn Saud attempted to reign in the Ikhwan but soon faced open revolt. Eventually the Ikhwan were defeated by Saud's more modern army, helping to bring about a centralized Saudi state.

Kurdish rebels seize control in the east of the Turkish Republic, declaring the Republic of Ararat on 28 October 1927. After a number of unsuccessful attempts to crush the rebellion, the Turks launch the Third Ararat Operation in August 1930 with tens of thousands of soldiers and air support. The Kurds are forced to take refuge around Mount Ararat, on the Persian border, where the last rebels surrender on 17 September.in wikipedia

Ikhwan tribesmen under the leadership of Sultan bin Bajad and Faisal al-Dawish assert themselves against Ibn Saud of the Kingdom of Hejaz and Nejd, wanting to continue to expand into the British protectorates. In November 1927 they raid Busayya in the British mandate of Iraq, followed by attacks on Kuwait in January 1928 and 1929. Ibn Saud responds by crushing the Ikhwan at the Battle of Sabilla in March 1929, but it is not January 1930 that the rebellion is finally suppressed.in wikipedia

The Persian army of Reza Shah Pahlavi invades the breakaway region of western Baluchistan, defeating Dost Mohammad Khan of Bampur in 1928. However the Damani tribes continue to resist in the Sarhad plateau and it is another 6 years before they are finally suppressed.in wikipedia

The British establish Aden Command, a Royal Air Force command responsible for the control of all British armed forces in the Aden Protectorates. This helps bring an end to Yemeni attacks on Aden’s frontier districts.in wikipedia

Indian National Congress representative Vallabhbhai ‘Sardar’ Patel leads a non-violent protest starting in Bardoli, in Gujarat in the Bombay Presidency of British Indian Empire, when that town, which had recently suffered from floods and famine, was faced with a 30% tax hike. In collaboration with Patel, village officials throughout Gujarat resign and tax revenues plummet. The Bombay government eventually agrees to rescind the tax and restore property it had confiscated during the protest.in wikipedia

Following his visit to Beijing, Chiang Kaishek is named director of the State Council—the equivalent of President—of the Nationalist Government of China.in wikipedia

The Tajik bandit Habibullah Kalakani is crowned King of Afghanistan after seizing Kabul from Amanullah Khan and his brother Inayatullah Khan while the Afghan army is involved in suppressing revolt in Laghman and Nangarhar. His reign is resisted by Mohammed Nadir Shah, who retakes Kabul in October and has Kalakani hanged on 1 November 1929.in wikipedia