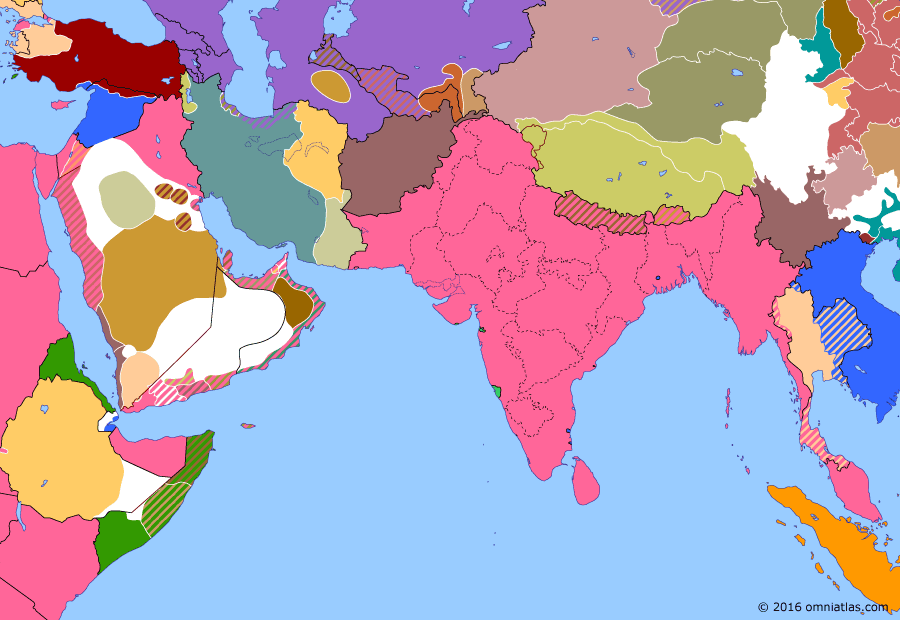 The most serious conflict in Turkey's war for independence was the Greco-Turkish War. In 1919 Greece had moved troops into western Anatolia to protect the sizeable local Greek population and assert its historical claim over the region. By August 1921 the Greeks were within 80km of Ankara, but proved unable to break through the Turkish defenses and were eventually forced to withdraw.

Dost Mohammad Khan of Bampur leads a Balochi revolt against the Persian government. For a time, he manages to maintain control of western Balochistan by forging alliances with the ruling families of the various principalities making up the region.in wikipedia

22 Jun 1921 Revocation of the Anglo-Persian Agreement▲

The last Italian forces withdrew from Antalya, southern Anatolia, avoiding clashing with the Turkish Nationalists and ending the Italian claim to the region.in wikipedia

The invading Greek army advanced on the Turkish Nationalist lines on the Sakarya River, 80km from the Nationalist capital of Ankara. By September 2, the Greeks had captured Mount Chal and in the ensuing 10 days, some units come within 50km of Ankara. However, the Greeks were overextended, and a Turkish counterattack on September 8 forced them to abandon the offensive and withdraw toward Eskişehir and Kara Hisar.in wikipedia