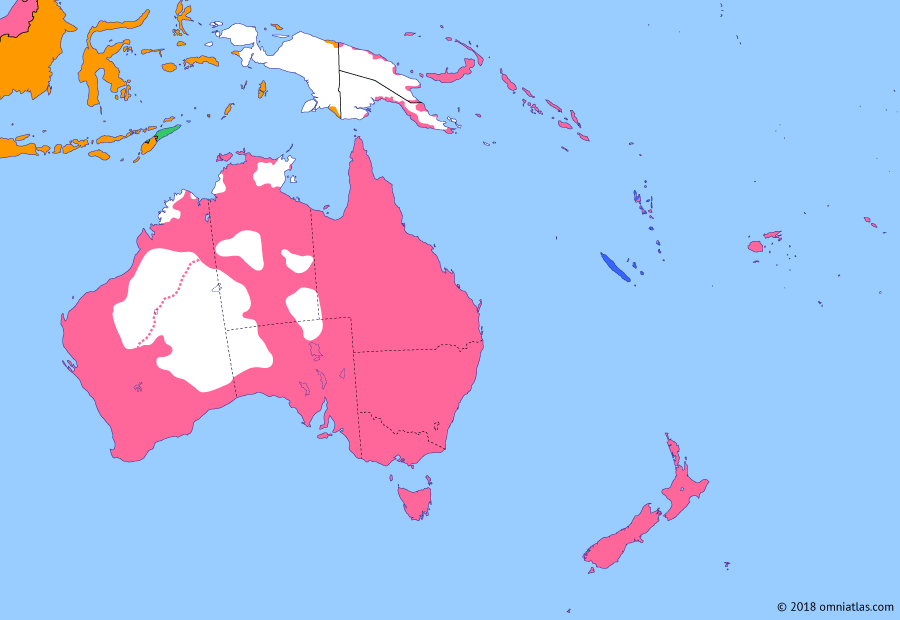 Australians and New Zealanders fought together as the ANZACs against Turkey at Gallipoli. After this campaign failed, many were deployed to the Western Front to face the Germans, while others stayed on to fight the Turks in the Middle East. The Great War, with its huge casualties and financial costs, left a deep impression on the national consciousnesses of the two dominions. When the War ended, they both signed the Treaty of Versailles - the first time either country had been a signatory to an international treaty.

In the process of pursuing and destroying the German East Asiatic Squadron, the Imperial Japanese Navy seized the German possessions of Ponape (Pohnpei), Yap, and Truk in the Caroline Islands. The navy set up its regional headquarters in Truk lagoon and stationed a garrison at Ponape.in wikipedia

After being formed in Egypt, the Australian and New Zealand Army Corps (ANZACs) are landed on the Gallipoli peninsula at what will become known as Anzac Cove. After suffering some 11,000 dead and 24,000 wounded of about 65,000 troops over an 8 month campaign for little gain, the ANZACs are withdrawn along with the other Allied forces.in wikipedia

On 2 April 1917, United States President Woodrow Wilson asked a special joint session of the US Congress to declare war on the German Empire. Congress obliged by declaring war on the 6th, with the resolution passing 82 to 6 in the Senate and 373 to 50 in the House.in wikipedia

On 7 November (25 October Old Style) 1917, Bolshevik Red Guards, led by Leon Trotsky, mounted an armed insurrection in Petrograd, capital of the Russian Republic, capturing several government buildings. The following day they seized the Winter Palace, the seat of Alexander Kerensky’s Provisional Government. The Bolsheviks declared a new government, the Council of People’s Commissars, with Vladimir Lenin as its head. Simultaneously and over the following days, other Bolshevik uprisings took place in towns and cities across Russia.in wikipedia

The deadly influenza pandemic, which was sweeping the world, arrived in New Zealand in October 1918, possibly from a mail ship from Hawaii, killing 8,600 (including 2,160 Maori). From there it was spread by a single ship—the SS Talune—to Fiji, Tonga, and Western Samoa in November, killing 9,000, 2,000, and 8,500 respectively (in the latter case 22% of the local population). The pandemic would reach Australia in late 1918, probably along separate routes, leading to some 12,500 deaths there. Quickly placed under strict quarantines, Tasmania and New Caledonia largely avoided the flu’s impact.in wikipedia

At 5am Paris time, Germany signed an armistice with the Allies in railway carriage No. 2419 D at Compiègne, France, to end its involvement in World War I. The armistice went into effect at 11am and, although not a formal surrender, demanded that the Germans withdraw their troops to behind their own borders, renounce the Treaty of Brest-Litovsk, release all prisoners, promise to pay reparations, and surrender their fleet and materials.in wikipedia

In response to ever-increasing alcohol prices and Administrator John Gilruth’s refusal to allow women employed in the state hotels leave to celebrate the end of the war, protesters descended on Government House, Darwin—the administrative center of Australia’s Northern Territory. The crowd broke into the property and rough handled the fleeing Gilruth before dispersing, prompting the Australian Government to send in the light gunboat HMAS Una to protect the administrator. After weeks of tension, Gilruth left the town aboard the cruiser HMAS Encounter, completing his term of administration from Melbourne.in wikipedia

Representatives of the Dominion of Canada, the Commonwealth of Australia, the Union of South Africa, and the Dominion of New Zealand signed the Treaty of Versailles separately from, but underneath, the King of the United Kingdom of Great Britain and Ireland and of the British Dominions beyond the Seas. This simple act—the first time the dominions had signed an international treaty as separate states—marked a step towards their control over their own foreign policies.in wikipedia