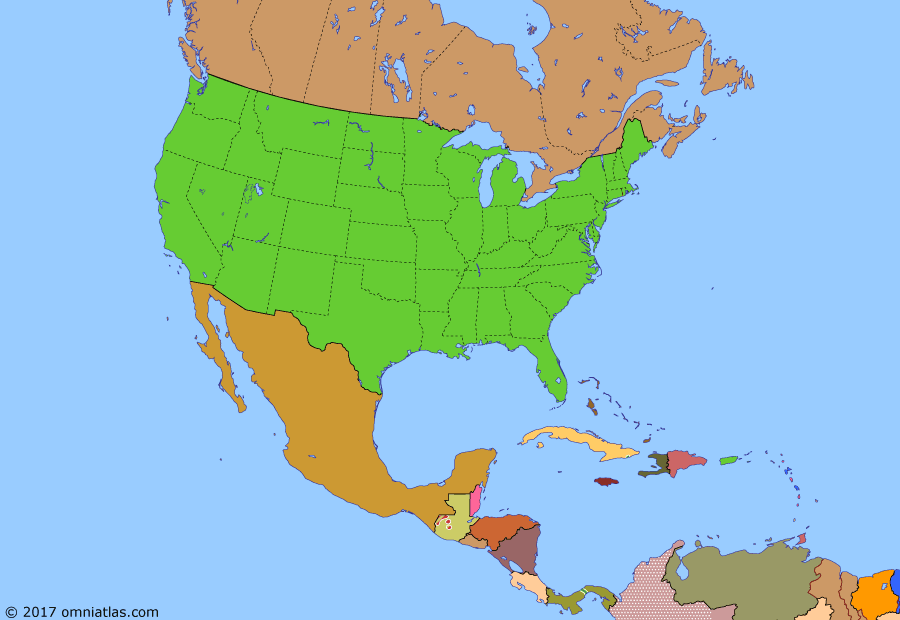 Nov 1969–May 1972Strategic Arms
Limitation Talks
between US & Soviets

Outside the Americas, the US had been fighting communism in Vietnam since the early 1960s. Meanwhile American society was being transformed by the wave of liberalism sweeping much of the Western world. Alongside pushing for minority rights and challenging authority, protesters also demanded an end to the extensive US involvement in Vietnam. From 1969, President Nixon worked to defuse tensions abroad - signing agreements with the Soviet Union, Communist China, and finally communist North Vietnam - before being forced to resign after the Watergate scandal. At the same time, US scientists out-competed their Soviet counterparts in the "Space Race" by landing a man on the moon.

The self-governing British colony of Barbados became an independent state and member of the Commonwealth of Nations, joining the United Nations and Organization of American States the following year. Errol Barrow—premier of the country from 1961—continued on to become first Prime Minister from 1966-76.in wikipedia

On 27 February 1967, the United Kingdom granted Saint Christopher-Nevis-Anguilla the status of associated state, giving the territory self-government. This action displeased Anguilla, which resented the increasing political dominance of Saint Christopher (now Saint Kitts) and wanted direct rule by the UK. On 30 May the Anguillans evicted the Saint Christopher police from their island, declaring independence four months later. After almost two years of crisis, in which a Anguilla was proclaimed a republic, the British peacefully reoccupied the island in March 1969.in wikipedia

On 26 June 1969, following rising tensions between the two countries, aggravated by rioting over football matches in which they faced each other to qualify for the 1970 FIFA World Cup, El Salvador ended its diplomatic relations with Honduras. Some weeks later, on 14 July, the Salvadoran Air Force attacked targets in Honduras while the Salvadoran Army crossed the border, capturing Nueva Ocotepeque on the 15th. However, the Hondurans soon stalled the Salvadoran offensive and the Organization of American States arranged a ceasefire, bringing combat to an end after just four days.in wikipedia

Apollo 11 landed US astronauts Neil Armstrong and Buzz Aldrin on the moon.in wikipedia

At the Strategic Arms Limitation Talks, the United States and Soviet Union agreed to limit the number of ballistic missile launchers in use.in wikipedia

On October 5, 1970, the separatist Québec Liberation Front (FLQ in French) attempted to seize power in Montréal, kidnapping provincial Deputy Premier and Labour minister Pierre Laporte and British diplomat James Cross. In response, the Canadian government implemented the War Measures Act and deployed military forces to Greater Montréal. After several weeks of negotiations, during which Laporte was found murdered, thirty of the FLQ operatives were arrested with five more exiled to Cuba in late December.in wikipedia

United States President Richard Nixon visited the People’s Republic of China, ending over 24 years of separation between the two states and allowing the American public to see images of mainland China for the first time in a generation. The trip shifted the balance in the Cold War, aligning the PRC and the US against the Soviet Union. As a result of the visit, the PRC agreed to a peaceful settlement of the Taiwan question, although the US would not end official ties with the Nationalists in Taiwan until it established full diplomatic relations with China in 1979.in wikipedia

The United States, South Vietnam, North Vietnam, and the Provisional Revolutionary Government (Viet Cong) signed the Paris Peace Accords. This treaty established a ceasefire in Vietnam, allowing the US to withdraw and end its direct military involvement in the conflict there. The accords also pushed for a negotiated peaceful reunification of Vietnam and democratic elections, although this agreement would soon fall apart as North and South Vietnam resumed fighting.in wikipedia

The British colony of the Bahamas became independent and a member of the Commonwealth of Nations.in wikipedia

In October 1973 the Organization of Arab Petroleum Exporting Countries (OAPEC)—who’s component nations produced about 75% of the world’s oil at the time—decided to cut oil production to force the United States, the United Kingdom, Canada, Japan, and the Netherlands to end their support of Israel during the Yom Kippur War. Beginning with a 5% cut on 17 October, oil production was dropped to 25% of pre-embargo levels by December, contributing to a global recession and causing tensions between the US and its European allies. The embargo was lifted in March 1974 after negotiations following the end of the Yom Kippur War.in wikipedia

In March 1967, the British colony of Grenada became a British associated state, gaining full control over its internal affairs. Grenada became a fully independent state on 7 February 1974, with Eric Gairy—Premier from August 1967—becoming the country’s first Prime Minister. Gairy would continue on to win Grenada’s first general election in 1976, but would be overthrown in a coup three years later.in wikipedia