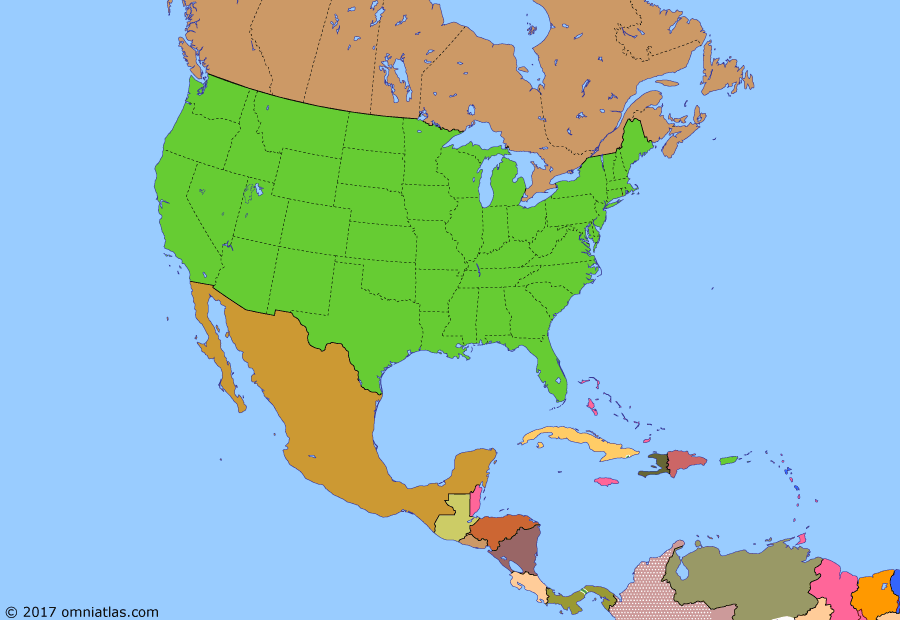 World War II left the United States and the Soviet Union as the dominant powers in Europe. Relations between the two began to deteriorate almost immediately, especially after US concerns over the Soviet installment of Communist regimes in Eastern Europe prompted President Truman to embark on a policy of "containment" by aiding the non-Communist regimes which surrounded the Soviet bloc. As this new "Cold War" heated up, the US and its European allies signed the North Atlantic Treaty, formally creating the NATO alliance to counter any potential Soviet attack.

After the Axis powers occupied Greece, the Greek contingent of the allied war effort became divided between the government-in-exile of King George II’s and the predominantly Communist partisans which oversaw the German withdrawal in 1944. Following the war’s end, the Communist Party reorganized into the Democratic Army of Greece (DSE) and fought a guerilla war against the Kingdom, but collapsed in 1948 due to lack of foreign support.in wikipedia

In an address to United States Congress, President Harry Truman outlined his policy of supporting “free peoples” against “attempted subjugation armed minorities or by outside pressures”, insisting the US assist them “primarily through economic and financial aid”. The speech was an attack on Soviet attempts to destabilize Greece and Turkey, leading the US to give financial support to those nations. As a general policy of containing Soviet expansionism by backing those it threatened, this so-called Truman Doctrine would become the foundation of US foreign policy during the Cold War.in wikipedia

United States governmental organizations, including the House Un-American Activities Committee and the FBI, encouraged by Senator Joseph McCarthy, cracked down on alleged Communist infiltration across the country.in wikipedia

In response to President Teodoro Picado’s annulment of presidential elections in Costa Rica, the rebel National Liberation Army of José Figueres rose against the government. In a short but bloody war, the government was overthrown and Figueres took over at the head of a provisional government junta, which would abolish the military and restore democracy after one and a half years.in wikipedia

The Charter of the Organization of American States (OAS) was drawn up and signed at the Ninth International Conference of American States at Bogota, Columbia, by the United States and the independent nations of South and Central America. The treaty would come into effect on 13 December 1951, with the birth of the OAS—an organization focused on regional solidarity and cooperation in the Americas.in wikipedia

Following World War II, US Secretary of State Gen. George Marshall developed a plan to aid the reconstruction of allied and occupied countries in Europe, passing as the Foreign Assistance Act in 1948. Although the law promised $5.3 billion in aid, the amount increased to $17 billion over four years of implementation. The plan was rejected by the Soviet Union and its satellites.in wikipedia

In 1948 the Soviet Union blocked land and water access to Western-occupied West Berlin, in an attempt to pressure the Western Allies to withdraw the newly introduced Deutsche Mark from West Berlin and thereby roll back attempts to economically reintegrate Germany. In response, the Americans, British, and other Western nations organized airlifts to supply the 2 million inhabitants of West Berlin, eventually more than making up for the cargo that had previously been delivered by rail. Unwilling to intercept the flights for fear of provoking open conflict, the Soviets eventually lifted the blockade in May 1949.in wikipedia

After a 1948 referendum in Newfoundland narrowly supported union with Canada, the Parliament of the United Kingdom passed the British North America Act 1949—later renamed the Newfoundland Act—on 23 March 1949. Eight days later, at midnight on 31 March, Newfoundland and its dependency of Labrador joined Canada as its tenth province, Newfoundland. In return, Canada took over much of Newfoundland’s infrastructure and assumed responsibility for its debt.in wikipedia

The North Atlantic Treaty was signed in Washington DC, creating a formal alliance—the North Atlantic Treaty Organization, or NATO—between Belgium, France, Luxembourg, the Netherlands, the United Kingdom, Canada, Denmark, Iceland, Italy, Norway, Portugal, and the United States. The treaty, primarily directed against the Soviet Union, committed each member state to consider any armed attack against another member state, in Europe or North America, to be an attack against them all.in wikipedia