North America 2021: Storming of the US Capitol 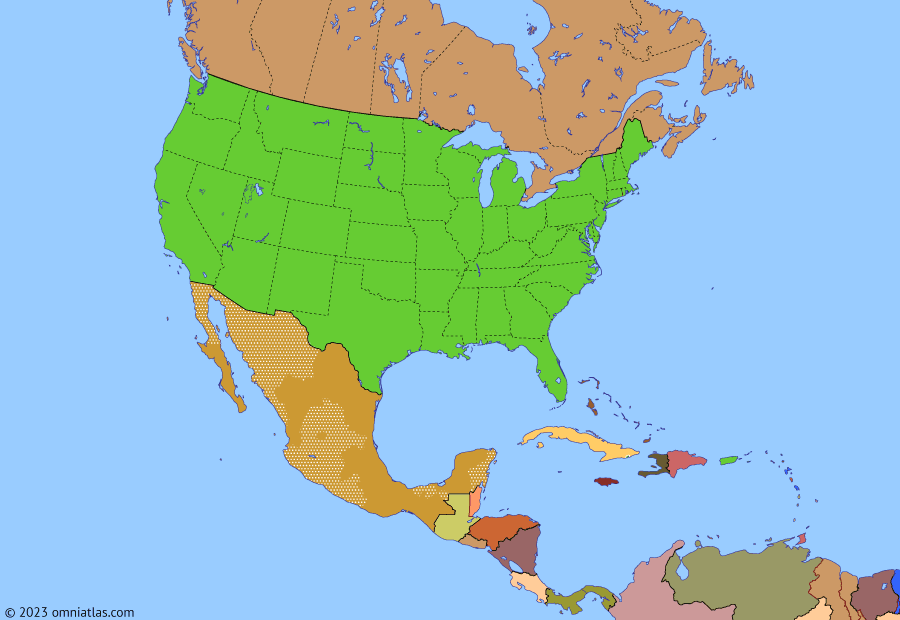 Nov 2018US, Mexico, and Canada
agree to replace NAFTA

Storming of the US Capitol

In 2016 Donald Trump was elected US President, beginning a controversial term which saw growing divisions within the country that were only exacerbated by the arrival of the COVID-19 pandemic in early 2020. When Trump was defeated by Joe Biden in the 2020 election, he refused to concede and on 6 January 2021 hundreds of his supporters stormed and briefly occupied the US Capitol in an attempt to disrupt the formalization of Biden’s victory.

By the early 2010s the Bolivarian Republic of Venezuela’s dependency on oil and its policies of overspending and price controls were proving unsustainable. Following the death of President Hugo Chávez from cancer in 2013, his successor, Nicolás Maduro, continued his policies only to face recession, rampant inflation, rising unemployment, and widespread protests. In 2016 alone the consumer price index rose 800% while the economy contracted by 18.6%, leading to hunger in much of the population and a general social collapse.in wikipedia

On 17 December 2014, following months of secret negotiations, US President Barack Obama and Cuban President Raúl Castro announced they would begin normalizing relations between Cuba and the United States after 54 years of hostility between the two nations. Four months later, on 14 April 2015, Obama announced he would remove Cuba from the United States State Sponsors of Terrorism list, an action which went into effect on 29 May. On 20 July Cuban and US “interests sections” in Washington and Havana were upgraded to embassies, formally restoring Cuban–US diplomatic relations.in wikipedia

In a surprise victory, Republican candidate Donald Trump—a businessman and celebrity with no political experience—defeated Democratic candidate Hillary Clinton—a former Secretary of State and First Lady—in the 2016 United States presidential election. Trump won 30 states with a total of 306 electors, gaining 57% of the electoral vote despite losing the popular vote by 2.1%. Trump’s success emphasized the divisions creeping into US society as well as the distrust much of the population had for the political establishment and the media. Accusations of Russian interference in the elections led the US intelligence community to launch an investigation into Trump’s presidential campaign in early 2017, ultimately concluding in 2019 that while there was “sweeping and systematic” Russian interference, there was insufficient evidence to bring conspiracy charges against Trump or his associates.in wikipedia

In July 2019 US president Donald Trump (a Republican) temporarily suspended a military aid package to Ukraine before asking Ukrainian president Volodymyr Zelensky to cooperate in investigating conspiracy theories about Trump’s potential 2020 election rival, Joe Biden (a Democrat). Describing Trump’s actions as an abuse of power and solicitation of foreign interference in the 2020 election, the Democrat-dominated US House of Representatives opened an inquiry into impeaching the president in September. With Republicans generally refusing to cooperate with the inquiry, Trump was impeached by the House in December 2019 but acquitted by the Republican-dominated Senate in February 2020.in wikipedia

The first cases of the COVID-19 coronavirus pandemic were reported in the United States in January 2020 and within a few months the disease had reached all North American countries and territories. By April the US had the highest official COVID death toll in the world, reaching over 873,000 dead by mid-January 2022, with Mexico reporting 301,000 deaths, Canada 31,000, Guatemala 16,000, Honduras 10,000, and Cuba 8,000 at the same time. Despite the release of newly-produced vaccines starting in November 2020, the virus continues to be a major problem due to vaccine hesitancy and the arrival of new variants. in wikipedia

On 25 May 2020 George Floyd, a 46-year-old African-American man, was killed during an arrest in Minneapolis, leading to widespread protests against police brutality and systemic racism in the United States. Despite the social contact risks associated with the ongoing COVID-19 pandemic, around 20 million people joined the demonstrations in the following months, which peaked in May–August but continued in places into 2021. Many of the protests soon escalated into violence and looting, leading to the deployment of the National Guard in over 30 states and at least 14,000 arrests by the end of June. in wikipedia

In the 2020 United States presidential election, President Donald Trump was defeated by the Democratic candidate Joe Biden, but refused to acknowledge the result. On 6 January 2021—the date on which Congress was to meet in the US Capitol building to formalize Biden’s victory—Trump held a “Save America” rally outside the White House, at which he encouraged his supporters to march on the Capitol. Hundreds did so, successfully storming the building for the first time since 1814 and forcing Vice President Mike Pence and the Senate to temporarily evacuate the premises. The clash left 4 rioters and 1 police officer dead, with 56 officers injured, before order was restored early that evening.in wikipedia