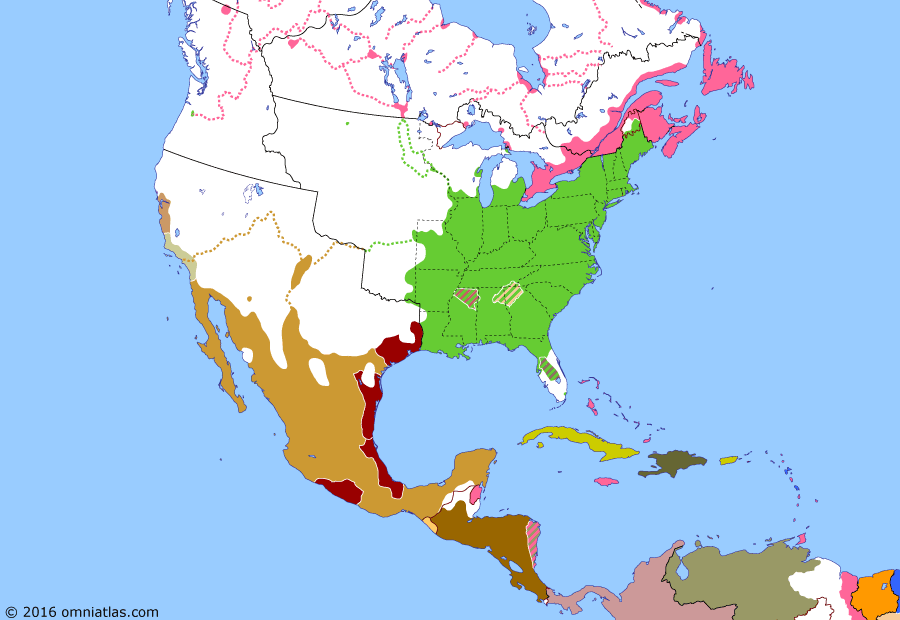 In 1830, there were still five large American Indian groups living as semi-independent nations east of the Mississippi: the Cherokee, Chickasaw, Choctaw, Creek, and Seminole. Under pressure from white settlers, US President Andrew Jackson passed the Indian Removal Act, allowing the government to extinguish Indian claims in the east in return for new lands in the west (in what is now Oklahoma). Over the following years, some 60,000 Indians were transferred to this new “Indian Territory”, with as many as a quarter dying en route.

The Choctaw signed the Treaty of Dancing Rabbit Creek with the United States of America, leading to the final removal of their nation east of the Mississippi. Nearly 17,000 Choctaw made the move to what would become called the Indian Territory in three phases starting on November 1, 1831, and ending in 1833, with over 2,500 dying en route.in wikipedia

Nat Turner led fellow African-American slaves in a rebellion in Southampton County, Virginia. Turner and his followers killed 55-65 whites over the following days before the revolt was suppressed at Belmont Plantation. 56 slaves were executed for their part in the rebellion, with many more killed by militias and mobs in the aftermath.in wikipedia

The federation of the Republic of Colombia (“Gran Colombia”) was officially dissolved, ending the union between New Granada, Venezuela, and Ecuador.in wikipedia

Baptist preacher Samuel Sharpe incited a slave uprising in the British colony of Jamaica, ultimately mobilizing as many as 60,000 of the island’s 300,000 slaves. The rebellion was suppressed by British forces under Sir Willoughby Cotton; 14 whites and 207 slaves were killed, with some 300 executed afterwards.in wikipedia

Mexican General Antonio Lopez de Santa Anna joined the Veracruz military garrison in a revolt against Mexican President Anastasio Bustamante, calling for the restoration of exiled former-president, Gomez Pedraza. Despite initial difficulties, Santa Anna was supported by revolts in Tamaulipas, Guerrero, and Texas. After the two sides clashed in Puebla in December, Bustamante, Pedraza, and Santa Anna signed the Agreement of Zavaleta to install Pedraza as president. However, Santa Anna was the real power and only months later, on 1 April 1833, he was elected president himself.in wikipedia

After Manuel Victoria, the unpopular Mexican governor of Alta California, was defeated at Cahuenga Pass near Los Angeles in December 1831, the previous governor, Jose Maria de Echeandia, resumed his role. In response, Augustin Zamorano led a rebellion in northern Alta California and became governor there. The two governors coexisted for almost a year before the Mexican Republic sent a new governor, Jose Figueroa, to replace them. Figueroa achieved this peacefully, granting amnesty to all the rebels.in wikipedia

In 1832 the Creek signed the Treaty of Cusseta with the United States of America, dividing Creek lands into individual allotments under the jurisdiction of the state of Alabama. While some sold their lands and moved to the Indian Territory in the west, many stayed on as citizens of Alabama, only to come into conflict with speculators and squatters. After violence broke out in 1836, over 15,000 of these remaining Creek were forcibly relocated to the Indian Territory, with some 3,500 dying en route.in wikipedia

Some 1,000 Sauk, Meskwaki and Kickapoo Indians, known as the “British Band” and led by a Sauk named Black Hawk, crossed the Mississippi River from the United States unorganized territory (now Iowa) into the US state of Illinois. After several clashes with wary US militia and troops, the British Band was finally located and defeated in July and August.in wikipedia

Several chiefs of the Seminole signed a treaty with the government of the United States of America at Payne’s Landing, Florida Territory. The treaty called for the Seminole to move west to what would become Indian Territory if suitable lands were found. However after visiting the area in 1833, most of them decided against moving.in wikipedia

Mexican General Antonio Lopez de Santa Anna’s insurrection against President Anastasio Bustamante encouraged revolt in Anahuac, in the Mexican region of Texas, where settlers believed that Santa Anna opposed centralization. By mid-August, the revolutionaries bad captured Velasco and Nacogdoches, restricting the Mexican garrisons to the west. From here they petitioned the government in Mexico City for change, particularly an end to restrictions on immigration.in wikipedia