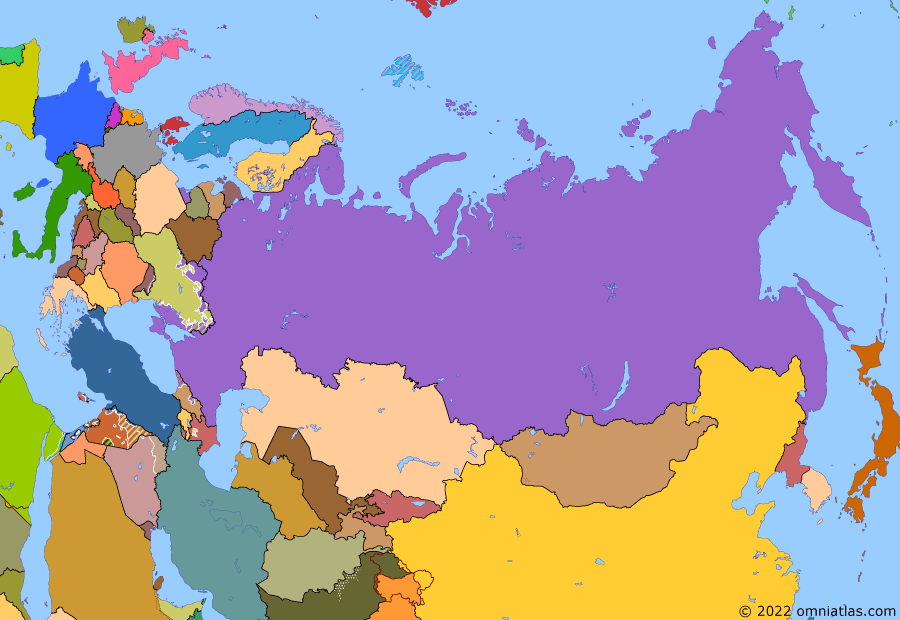 Sep–Nov 2020Azerbaijan expels Armenia
from much of Nagorno-Karabakh

May–Aug 2021Taliban seizes control
of Afghanistan
as US withdraws

Successors of the Soviet Union

The Russian foreign electoral interventions of 2015 and after did little to alleviate tensions between Russia and the West. In February 2022 the rivalry entered a dangerous new phase when Russia launched a full-scale invasion of Ukraine.

Watch the latest Omniatlas Youtube video on the invasion of Ukraine.

In November 2018 the Russian Coast Guard fired upon and captured three Ukrainian Navy vessels in the Kerch Strait—lying between Russia and the Russian-annexed Crimean Peninsula—as they attempted to pass from the Black Sea into the Sea of Azov en route to the Ukrainian port of Mariupol. Russia claimed that the ships had entered Russian territorial waters; Ukraine responded by declaring one month of regional martial law under the stated concern of a Russian invasion. Russian actions were criticized by Europe and the United States.in wikipedia

In December 2018, without any apparent consultation with Congress and against the recommendations of his advisors, United States President Donald Trump announced on Twitter that the war with ISIS (Daesh) had been won and the remaining 2,000 US troops in Syria would be withdrawn, although he gave no clear timetable. The following day US Secretary of Defense Jim Mattis tendered his resignation, expressing concern that the fight with ISIS was not yet complete and that the move handed control of the region to Russia and Iran and was an abandonment of the US’s Kurdish allies. Trump’s words were also met with concern by US allies, although they were greeted as a positive move by Russian President Vladimir Putin. The withdrawal took place over 2019, but was partially reversed in late October to leave 500–900 US troops in eastern Syria.in wikipedia

In May 2018 United States president Donald Trump withdrew the US from the 2015 Joint Comprehensive Plan of Action nuclear deal with Iran, reinstating sanctions against Iran and raising tensions between the two countries. From May 2019 the US, Iran, and their allies mounted limited attacks and counterattacks against each other’s assets in the Persian Gulf, leading up to 31 December Iranian-backed attack on the US Embassy in Baghdad, Iraq, and a 3 January 2020 airstrike in which US drone-launched missiles targeted and killed Iranian general Qasem Soleimani and 9 others near Baghdad Airport. In retaliation, Iran launched missile strikes at an unoccupied US airbase in Iraq.in wikipedia

On 6 October 2019 United States president Donald Trump ordered the withdrawal of US troops from Rojava in northeastern Syria, where the US had been supporting its Kurdish allies. Three days later, in what they code-named Operation Peace Spring, Turkey troops crossed into Rojava, expelling Kurdish forces from a 30 km-deep “safe zone” in the border region. The Kurds responded by reaching an agreement with the Syrian government, allowing the Syrian Army to enter Rojava in an attempt to defend the region against further Turkish offensives.in wikipedia

In late September 2020 clashes broke out along the Nagorno-Karabakh Line of Contact, which had been established after Armenia’s occupation of southwest Azerbaijan in support of the breakaway state of Artsakh in 1994. Supported by Turkey, the Azerbaijanis made substantial gains, particularly in the south where they captured Shusha, the second-largest city in Nagorno-Karabakh, on 8 November. Two days later, a Russian-brokered ceasefire was agreed, whereby Nagorno-Karbakh was divided along the ceasefire line and Armenia withdrew from all Azerbaijani territory it had occupied outside Nagorno-Karabakh.in wikipedia

At the beginning of May 2021, as US and allied forces began their planned withdrawal from Afghanistan, the Taliban launched its summer offensive and within three months had extended its control over the countryside from 73 to 223 districts. In the first weeks of August—and with a rapidity that surprised governments around the world—the Taliban secured the major cities, entering Kabul on the 15th just as Afghan president Ashraf Ghani fled the country. Having established their de facto rule, the Taliban reinstated the Islamic Emirate of Afghanistan that same day. in wikipedia

On 24 February 2022, after months of military buildup and rising tensions, Russia launched a full-scale invasion of Ukraine from Belarus, mainland Russia, the Donbas republics, and Crimea. The largest military assault on a European state since World War II, the invasion was internationally condemned and prompted massive sanctions on Russia by the United States and its allies. As a result of the invasion, millions of Ukrainians fled their homes, with over 3.6 million Ukrainians leaving the country.in wikipedia

In late February 2022 the Russian Armed Forces reached the outskirts of the Ukrainian capital of Kyiv, capturing key areas to the north and west of the city. However, the Russian offensive—weakened by poor planning and logistics—soon stalled in the face strong Ukrainian resistance and within a month the Ukrainian Ground Forces were mounting successful counterattacks. In response, Russia, declaring that it would scale down military activity in the area, promptly abandoned the battle by withdrawing all of its troops from the Kyiv region for operations elsewhere. in wikipedia