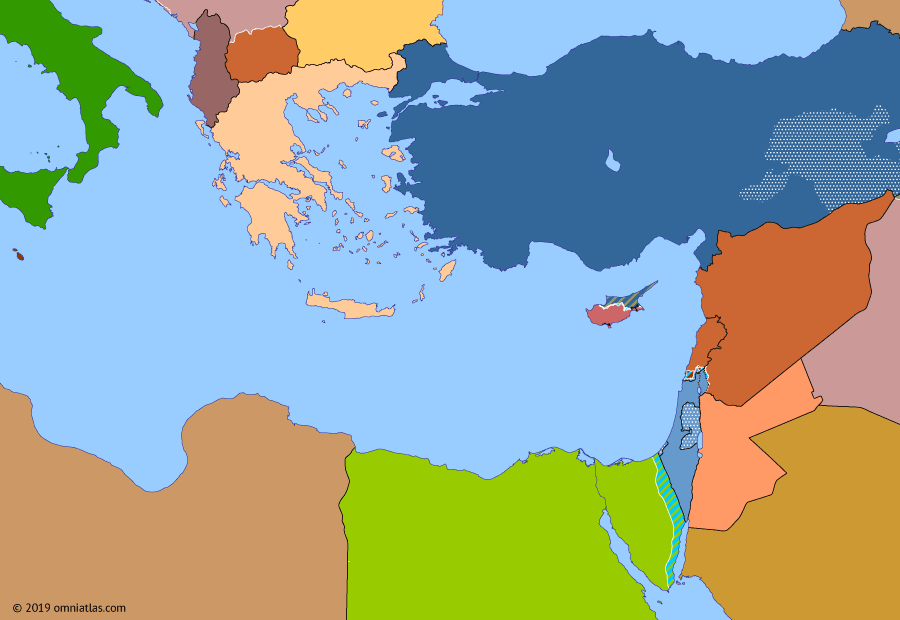 Nov 1989Fall of the
Berlin Wall

After the Yom Kippur War

Collapse of the Eastern Bloc

In 1989 the Cold War came to an abrupt end as the Soviet Union’s attempts to reform allowed the countries of the Eastern Bloc to throw off communist rule. Two years later, both the Socialist Federal Republic of Yugoslavia and the Soviet Union itself collapsed as their component states ended local communist rule and asserted their independence.

In September 1988 the outgoing Lebanese president Amin Gemayel appointed another Maronite Christian, Lebanese Armed Forces commanding general Michel Aoun, as acting prime minister, contravening the National Pact which reserved that position for a Sunni Muslim and thereby splitting the Lebanese Government into two rival factions, as moderates and Muslims denounced the appointment as illegal. Aoun’s government then attempted to regain control of Lebanon’s ports and coastline, declaring a ‘war of liberation’ against the Syrian Army in March 1989. After several clashes, Syrian forces entered eastern Beirut at the request of rival president—and moderate Christian—Elias Hrawi in October 1990, defeating Aoun and executing many of his supporters.in wikipedia

Under the mediation of Saudi Arabia, leaders of the major factions of Lebanon—with the notable exception of Michel Aoun, prime minister of the Christian-dominated rival Lebanese Government—signed an agreement in Ta’if, Saudi Arabia, to bring about an end to the Lebanese Civil War. Under the agreement, the factions accepted the principle of “mutual coexistence”, restructured the National Pact to decrease the privileged status of Maronite Christians, and called for the withdrawal of Israel from southern Lebanon. The agreement provided for the disarmament of the militias except for Hezbollah—which was allowed to stay armed as a “resistance force” against Israel in the south—and stipulated that the Syrians would withdraw in two years.in wikipedia

After Hungary and Czechoslovakia opened their borders to Austria, allowing tens of thousands of East Germans to escape to the West, the government of East Germany partially opened its border with West Germany. In the confusion over the new regulations, masses of East Germans gathered at the Berlin Wall, overwhelming the guards and demanding to cross to the West. At 10:45 pm on 9 November, the guards relented. The Wall was swamped by celebrating East and West Germans, then torn down over the ensuing days.in wikipedia

In November 1989 moderate Communists within the Bulgarian government ousted long-time State Council Chairman Todor Zhivkov, replacing him with his foreign minister and rival Petar Mladenov. Following Mladenov’s announcement to the public, on 15 January 1990 the National Assembly officially ended single-party rule by the Communists and in April the Bulgarian Communist Party was renamed as the Bulgarian Socialist Party (BSP). Following the BSP’s victory in elections in June, the People’s Republic of Bulgaria formally became the Republic of Bulgaria in November.in wikipedia

To finance the 1980–88 war against Iran, Iraq had borrowed more than US$14 billion from the Emirate of Kuwait, and in 1989 lobbied to have its debt to that country forgiven. Kuwait’s refusal to forgive the debt—coupled with Iraqi allegations of Kuwaiti economic warfare and slant-drilling for oil across their shared border—prompted Iraq to invade on 2 August 1990. In a little over two days of fighting, Iraqi forces overwhelmed the Kuwaiti army and occupied the country. Under Iraqi control, Kuwait became a short-lived republic before accepting annexation by Iraq on the 28th.in wikipedia

The Syrian victory over General Aoun (13 October 1990) effectively ended the Lebanese Civil War by removing the main opposition to peace. The Syrians restored order in Beirut—enabling the dismantling of the Green Line—and began supervising the dissolution of the various militias across Lebanon north of the Litani River. In 1991 the Lebanese Parliament granted a general amnesty to political crimes committed during the civil war, although, despite assurances that they would soon leave, Syrian troops would remain in the country for another 14 years.in wikipedia

Coalition forces led by the United States of America conducted a five-week aerial and naval bombardment of both Iraq and Iraqi-occupied Kuwait. On 24 February, a ground assault was launched from Saudi Arabia. In a one hundred-hour land campaign, the coalition defeated the Iraqi military, liberated Kuwait, and occupied much of southern Iraq.in wikipedia

On 31 March 1991 the Republic of Georgia held a referendum on independence, with 98.9% of voters approving the restoration of Georgia’s independence as proclaimed in May 1918, prior to Soviet annexation. The results were announced in early April and on the 9th—the second anniversary of the 1989 Soviet crackdown on Georgian protests in Tbilisi—the Georgian Supreme Council unanimously passed the declaration of independence, seceding from the Union of Soviet Socialist Republics.in wikipedia

25 Jun 1991 Independence of Slovenia and Croatia▲