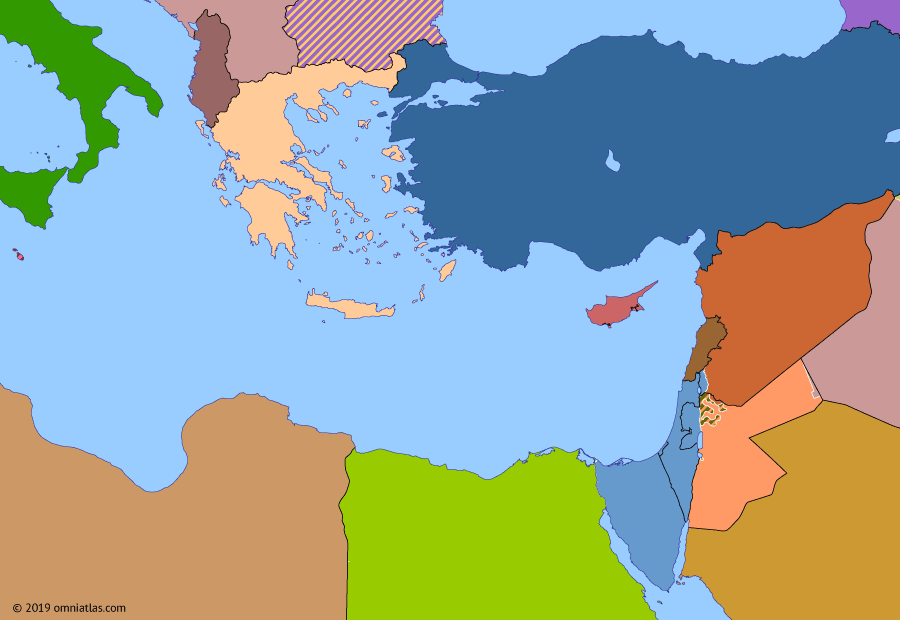 Following the Six-Day War, forces of the Palestine Liberation Organization (PLO) shifted to Egypt and Jordan to continue their struggle, with most eventually concentrating in Jordan. By late 1968 this was causing problems in Jordan itself, as elements of the PLO attacked Jordanian authorities and even threatened regime change. Losing his patience, King Hussein of Jordan launched an offensive against the PLO in September 1970 and, despite a Syrian attempt at intervention, expelled them from the country.

Following defeat in the Six-Day War, the United Arab Republic (Egypt) began a series of commando, air, sea, and artillery strikes against Israeli positions in the Sinai from July 1967, prompting Israeli counterattacks. In 1968 the Palestine Liberation Organization (PLO) started mounting raids from Jordan into Israel and the Israeli-occupied West Bank, leading to a number of Israeli reprisal attacks into Jordan. After several years of this intermittent conflict—which saw increasing Soviet involvement in Egypt’s defence and growing US support for Israel—a cease-fire agreement was reached in August 1970.in wikipedia

At the 1967 Arab League summit in Khartoum, the attending Arab heads of states of Algeria, Egypt, Iraq, Jordan, Kuwait, Lebanon, Syria, and Sudan signed a resolution calling for an end of the Arab oil boycott declared during the Six-Day War, an end to the Yemen Civil War, and economic assistance for Egypt and Jordan. Most famously, the resolution insisted on continued belligerency with Israel in what became known as the “Three No’s”: “no peace with Israel, no recognition of Israel, no negotiations with it”.in wikipedia

In March 1968, in response to Palestinian fedayeen (militant) incursions, Israel launched a large scale offensive on the Jordanian town of Karameh, where the Palestine Liberation Organization (PLO) had made its headquarters. Despite attacking with some 15,000 troops and 47 tanks—and killing perhaps 200 PLO and Jordanian combatants—the Israelis failed in their attempt to capture Yasser Arafat, the PLO leader.in wikipedia

In July 1968 General Ahmed Hassan al-Bakr launched a coup in Iraq, deposing the “weak” Nasserist president, Abdul Rahman Arif, and bringing the Iraqi Regional Branch of the Arab Socialist Ba’ath Party to power. The coup solidified Ba’athist rule in Iraq for the next thirty-five years, with al-Bakr’s deputy, Saddam Hussein, succeeding him as president in 1979.in wikipedia

Following the Six-Day War (1967) and especially after the Battle of Karameh (March 1968), Palestinian fedayeen (militants) began converging on Jordan, undermining the Jordanian government’s authority in the Palestine Liberation Organization (PLO)-operated refugee camps of the north. From November 1968 intermittent clashes broke out between the fedayeen and Jordanian authorities, culminating in a number of assassination attempts on King Hussein himself. In early September 1970 three planes were hijacked by the Popular Front for the Liberation of Palestine—an offshoot of the PLO—and blown up after the removal of the 371 hostages, placing Jordan in a state of crisis.in wikipedia

Prior to 1968 the United States was not a close ally of Israel and other countries, such as France, provided most of Israel’s arms imports. This changed in late 1968, when the Lyndon Johnson administration introduced the concept of Qualitative Military Edge, committing the US to maintaining Israel’s technological, tactical, and other military advantages over its numerically superior adversaries. As a first step in this new stance, the US announced the sale of 50 F4E Phantoms to the Israeli Air Force.in wikipedia

In September 1969, while King Idris I of Libya was in Turkey for medical treatment, a group of Libyan Army officers under the leadership of Colonel Muammar Gaddafi seized power in Benghazi and proclaimed the Libyan Arab Republic. The coup pre-empted Idris’ abdication and the succession of his heir the following day. The coup was quickly accepted throughout the country and international recognition of the new government, the Revolutionary Command Council, soon followed.in wikipedia

In January 1970 President Nasser of the United Arab Republic (UAR) secretly flew to Moscow to request new SAM batteries and increasing Soviet support in the wake of Israeli successes—aided by US-supplied aircraft—in the 1967–70 War of Attrition. The Soviets agreed to Nasser’s requests, increasing Soviet personnel in Egypt from about 3,000 to over 10,000 (plus 100–150 Soviet pilots) by 30 June. This brought Soviet forces into direct confrontation with Israel, leading to the death of 58 Soviet personnel and the downing of several of their aircraft by the end of the conflict.in wikipedia

Facing escalating confrontations with fedayeen (militant) concentrations of the Palestine Liberation Organization (PLO) in northern Jordan, King Hussein ordered the Jordanian Armed Forces into Amman and other cities to restore government control. The fedayeen resisted the Jordanian offensive for ten days, until Hussein finally agreed to an Egyptian brokered peace agreement. Nonetheless, the conflict weakened the PLO’s position in Jordan and in its aftermath the Jordanian government purged itself of Palestinian influences.in wikipedia

In response to the Jordanian crackdown on fedayeen concentrations in northern Jordan the previous day, Syrian forces with Palestine Liberation Army markings crossed the border on 18 September 1970. The Jordanian Army managed to stop the Syrians north of Irbid and, four days later, King Hussein ordered in the Royal Jordanian Air Force. With the Syrian Air Force refusing to join combat—possibly due to a power struggle within the Syrian government—the Syrian troops were swiftly ejected from Jordan.in wikipedia