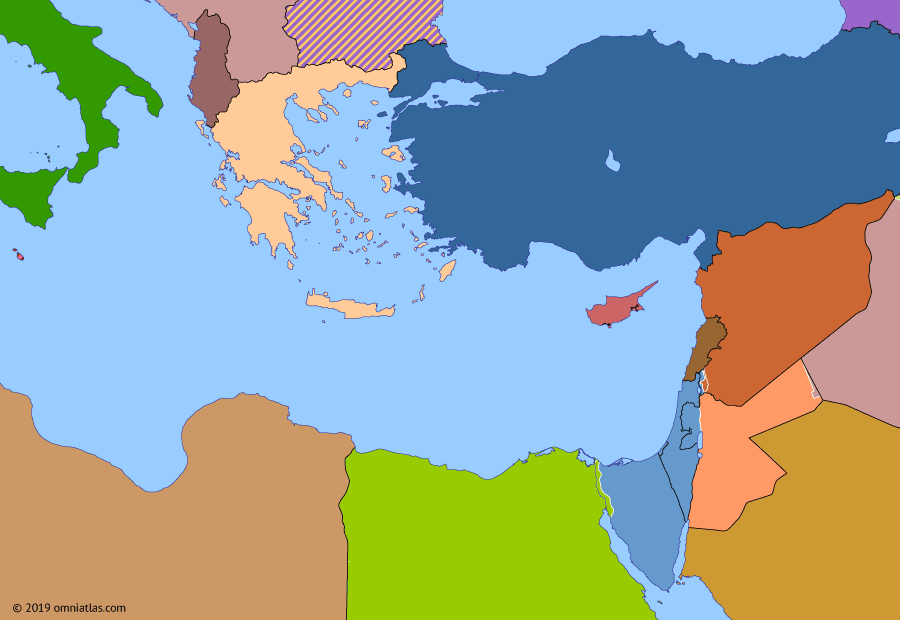 During the sporadic Arab–Israeli clashes of the late 1960s and early 1970s, the United States upped its support of Israel, while Egypt and Syria became increasingly aligned with the Soviet Union. With Soviet-supplied arms, the Egyptians and Syrians launched a simultaneous attack on Israel in October 1973, catching the Israelis by surprise and threatening to retake the Sinai and Golan Heights.

To deal with the Black September crisis in Jordan, Egyptian President Gamal Abdel Nasser called for an emergency Arab League summit in Cairo where he managed to arrange a ceasefire. As he was leaving the summit, Nasser suffered a heart attack, dying several hours later. His death shocked the Arab world, with some five million or more mourners attended his funeral procession on 1 October. He was succeeded by his vice president, Anwar Sadat.in wikipedia

In February 1969 the Syrian Minister of Defense, General Hafez al-Assad, consolidated his power in Syria by peacefully seizing control of the country’s newspapers and radio stations, but continued to recognize the rule of Salah Jadid and his government. Following Syria’s lackluster military intervention in the Black September crisis in Jordan, Assad attended the Emergency National Congress where he met condemnation by Jadid and his supporters. Prepared for the situation—Assad had already surrounded the congress with loyal troops—he ordered the arrest of Jadid’s government, establishing his own government a few days later.in wikipedia

Shortly after acceding to power in Syria, Hafez Assad traveled to Moscow to push Syrian—Soviet relations—which had been close for 15 years—to the next level. In return for increased economic and military aid, Assad agreed to host a Soviet naval facility at Tartus, supporting the Soviet Navy’s 5th Operational Squadron in the Mediterranean.in wikipedia

In the late 1960s and early 1970s Turkey faced increasing instability, marked by demonstrations, strikes, assassinations, and violent clashes between extremist groups. In March 1971 the Chief of the General Staff, Memduh Tağmaç, handed Prime Minister Süleyman Demirel a memorandum, demanding the formation of a new government. Demirel bowed to the pressure and resigned three hours later, but the military’s act ultimately failed to restore stability in Turkey.in wikipedia

Less than a year after becoming President of Egypt, Anwar Sadat dismissed and imprisoned the pro-Soviet Vice President Ali Sabri and Sharawy Gomaa, the Interior Minister and controller of the secret police. The purging extended to other members of the government and security forces, including Nasserists, pro-Soviets, liberals, and Islamists. In July 1972 Sadat publicly expelled 20,000 Soviet advisors—although given that these had already fulfilled their role in the War of Attrition and Soviet military supplies actually increased after their departure, this act may have been more for show.in wikipedia

Following Black September (1970) the Jordanian government cracked down on the Palestinian Liberation Organization’s presence in Jordan. By July 1972 the last PLO bases in the country were reduced to the Ajlun area, where some 2,500 fedayeen still held out against the Jordanian authorities. That month, the Royal Jordanian Army attacked with artillery and air support, killing some 250 guerrillas in an 11-day offensive and ending PLO resistance in Jordan.in wikipedia

Following the death of Egyptian President Gamal Abdel Nasser in November 1970, his successor, Anwar Sadat, proposed a political federation between Arab states as an alternative to a unified Arab state like the unsuccessful United Arab Republic. Muammar Gaddafi, the new pan-Arabist president of Libya, proposed the Federation of Arab Republics, giving Syria and Egypt access to Libyan oil money. After finding approval in referendums across the three countries in September 1971, the federation was founded early in 1972, but progress stalled thereafter as the three leaders disagreed on the terms of a merger. Eventually increasing differences over leadership and direction led to the collapse of the federation in 1977.in wikipedia

In 1973 the Greek military junta leader, Georgios Papadopoulos, attempted to legitimize his regime by beginning a process of democratization, abolishing the monarchy and declaring the Third Hellenic Republic in June. Papadopoulos’ heavy-handed reforms encountered resistance across Greece and provoked student protests, leading to his deposition by hardliners under Brigadier Dimitrios Ioannidis in November. Ioannidis was in turn discredited when he backed the ethnic Greek coup d’état in Cyprus—which turned into a fiasco when the Turks invaded the island—prompting the Greek military to withdraw its support for the junta and restore parliamentary democracy.in wikipedia

On 6 October 1973 Egyptian military forces mounted an offensive against Israeli forces occupying the Sinai, catching the Israelis by surprise. Within a day, the Egyptians had successfully crossed the Suez Canal and established bridgeheads across a 160-kilometer front. By the 8th the Egyptians had completely overrun the Israeli Bar Lev Line to advance 15 kilometers into the Sinai.in wikipedia

When Egypt attacked Israeli forces in the Sinai at 14:00 on 6 October 1973, Syria simultaneously launched an offensive on the Israeli brigades occupying the Golan Heights. Although Syrian attacks on the Quneitra Gap in northern Golan were beaten back, the Syrians successfully penetrated Israeli lines in the southern sector. By the evening of 7 October Syrian forces had reached the outskirts of Nafah, by the Sea of Galilee, where they halted.in wikipedia