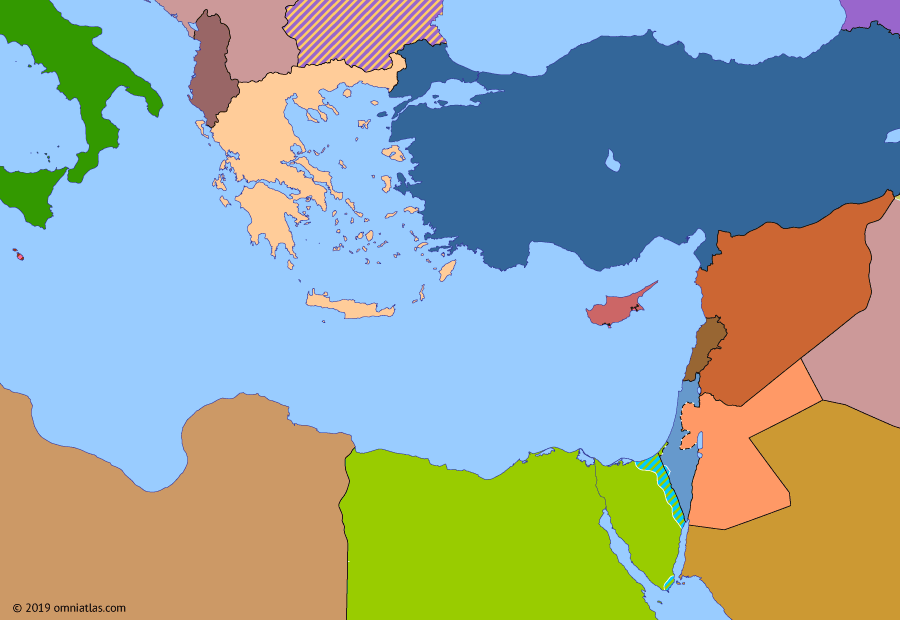 Independence of Cyprus and Malta

In 1955 Greek Cypriots began a campaign of violence against British colonial rule, calling for the unification of Cyprus with Greece, but were opposed by Turkish Cypriots. Eventually a compromise solution was reached whereby, in 1960, Cyprus gained independence as a bi-national state and the British retained naval bases in the south of the island. As the UK reduced its forces in the Mediterranean, it found it had less need for Malta, which was granted independence in 1964. The Royal Navy’s Mediterranean Fleet was itself disbanded just three years later, after more than 342 years of existence.

Through the 1950s the democratically-elected Democrat Party (DP) governed Turkey, but towards 1960 faced political corruption and economic crises. In 1960 Prime Minister Adnan Menderes planned to visit Moscow to ask for financial support, prompting 38 young Turkish military officers under General Cemal Gürsel and Colonel Alparslan Türkeş to stage a coup. The officers established a junta—the National Unity Committee—and conducted a purge of the government and military, trialing and executing Menderes. After a year, a new constitution was drawn up and the junta stepped down, in principal restoring democratic rule.in wikipedia

In 1959, during meetings at London and Zürich, the United Kingdom, Turkey, Greece, and the Cypriot community agreed to establish an independent, bi-national state in Cyprus. The three powers also guaranteed Cyprus’s territorial integrity and security, reserving the right to take action to restore its bi-national status. Independence went into effect on 16 August 1960, though the United Kingdom still retained sovereignty over military bases on the island.in wikipedia

Reacting to the tightening of the Egypt-based United Arab Republic’s control over Syria (renamed the Northern Region), disgruntled Syrian officers seized control in Damascus on the morning of 28 September 1961. UAR President Nasser ordered Egyptian troops to still-loyal Latakia and Aleppo but they were quickly captured. The next day the rebels proclaimed Syria’s secession from the UAR as the Syrian Arab Republic. Nasser recognized the secession on 5 October and Syria rejoined the United Nations later that month.in wikipedia

On the night of 25–26 September 1962 an Egyptian-backed coup d’état under the command of army officer Abdullah as-Sallal dethroned the newly crowned Imam Muhammad al-Badr of Yemen and declared the Yemen Arab Republic. The Imam escaped to the Saudi Arabian border, where he rallied the northern Shia tribes to his cause, thus beginning the eight-year North Yemen Civil War. Egyptian President Gamal Abdel Nasser immediately recognized the new regime and began landing troops in the country in early October. The Imam, on the other hand, soon found support from Saudi Arabia, Jordan, and the United Kingdom.in wikipedia

In the early morning of 8 February 1963—the fourteenth day of Ramadan—the Ba’ath Party’s Iraqi-wing seized power in Baghdad, assassinating the communist air force chief and occupying Abu Ghraid radio station. The Prime Minister of Iraq, Abd al-Karim Qasim, held out in the Ministry of Defence for one day, only to be executed after he surrendered. The coup leaders gave Qasim’s former deputy, Abdul Salam Arif, the largely ceremonial role of President, while prominent Ba’athist general Ahmed Hassan al-Bakr was named Prime Minister.in wikipedia

Inspired by the Ramadan Revolution in Iraq (February 1963), the military committee of the Syrian Regional Branch of the Arab Socialist Ba’ath Party began moving tanks and other units towards Damascus on the night of 7–8 March. Opposing government units were caught by surprise and by mid-morning all had surrendered to the advancing conspirators. The next day the coup leaders formed a new government, with Salah al-Din al-Bitar as Prime Minister and Lu’ay al-Atassi as President, although substantial power still resided in the military.in wikipedia

Following the Ramadan Revolution (February 1963) Ali Salih al-Sa’di, secretary general of the Iraqi Ba’ath Party and controller of the National Guard militia, exercised considerable power in government and presided over the massacre of suspected communists and other dissidents. Late on Tuesday 12 November 1963 gunmen suddenly seized al-Sadi and 18 of his Ba’ath Party colleagues, forcing them into exile in Spain. The next day Prime Minister Ahmed Hassan al-Bakr announced that he was now head of the ruling Ba’athist Party, initiating a week of governmental instability as supporters of al-Sa’di and al-Bakr made proclamations and counter-proclamations as they vied for power. Eventually President Abdul Salam Arif stepped in, dismissing al-Bakr, replacing the National Guard with the Republican Guard, and establishing a new pro-Nasserist government.in wikipedia

At its first summit, in Cairo in January 1964, the Arab League gave Ahmad al-Shuqayri, a Palestinian diplomat, a mandate to establish a Palestinian entity. Gathering 422 representatives, the first Palestinian National Council met in Jerusalem in May, establishing the Palestinian Liberation Organization (PLO) and electing al-Shuqayri as chairman of the PLO Executive Committee. The PLO rejected Zionism and dedicated itself to the “restoration of the Palestinian homeland”, launching a campaign of guerrilla and terrorist tactics against Israel.in wikipedia

After World War II Malta gained self-rule but was divided over whether to seek full integration with the United Kingdom or aim for independence. Following the British downgrading of the naval dockyards, the governing pro-integration Malta Labour Party resigned en masse in 1958, creating a state of emergency in the colony. With the failure of integration efforts, the nationalist Partit Nazzjonalista of Giorgio Borg Olivier was elected to government and led the islands to independence as the State of Malta on 21 September 1964.in wikipedia