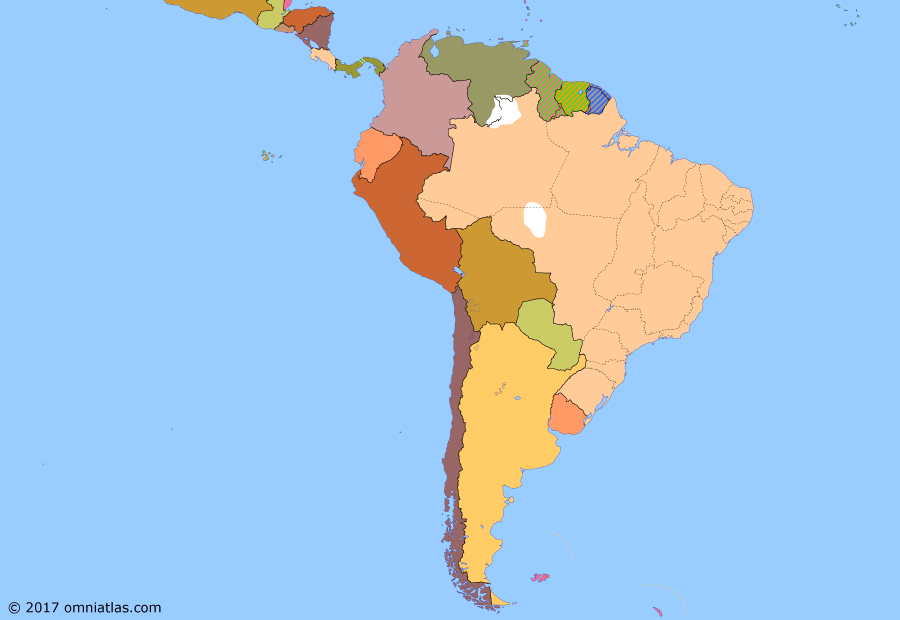 Feb 1942US establishes
base on Bora Bora

Jun 1942US defeats
Japan at Midway

Under agreement with the Dutch government-in-exile, the United States occupied Surinam (Dutch Guiana) to protect its bauxite mines.in wikipedia

In the wake of the Japanese attack on Pearl Harbor, Panama, Honduras, El Salvador, Costa Rica, Haiti, the Dominican Republic, Guatemala, Nicaragua, and Cuba declared war on Japan in support of the United States. Most of these nations would also declare war on Germany and Italy a few days later following Hitler’s declaration of war on the US.in wikipedia

Claiming that US President Franklin Roosevelt had repeatedly violated all rules of neutrality, and noting in particular his “shoot on sight” order, Nazi Germany declared war against the United States of America on 11 December 1941. The decision to declare war was made by German leader Adolf Hitler, almost without consultation. Later that day, the United States responded by declaring war on Germany.in wikipedia

In 2 October 1941, Ecuador and Peru signed the Talara Accord, creating a demilitarized zone in anticipation of a definitive peace treaty to end the Ecuadorian-Peruvian War. That treaty came on 29 January 1942, at the third Pan-American Summit, held in Rio de Janeiro, when the foreign ministers of the two countries signed the Protocol of Peace, Friendship, and Boundaries between Peru and Ecuador. By the terms of this protocol, Ecuador agreed to abandon most of its claims against Peru in return for the withdrawal of Peruvian troops from Ecuador.in wikipedia

Argentina—which had already established weather stations in the South Orkney Islands from 1904—formally claimed Antarctica between the meridians 68° West and 24° West as Argentine Antarctica. On 8 November 1942, the Argentinians officially took possession of the territory by placing a cylinder containing a report and a flag on Deception Island. The National Antarctic Convention redefined the sector four years later—on 2 September 1946—as between 74° West and 25° West.in wikipedia

The archipelago of Fernando de Noronha was separated from the Brazilian state of Pernambuco, becoming the Fernando de Noronha Federal Territory. In September 1942, the United States Army Air Forces constructed an airbase on the islands as a trans-Atlantic link between Brazil and French West Africa; Brazil granted jurisdiction over the airport to the US Navy from 5 September 1944 to the end of World War II. The territory was returned to Pernambuco in 1988.in wikipedia

United States Task Force 5614 arrived off Bora Bora, in Free French-controlled French Oceania, with six transport and cargo ships, landing 4,400 troops of the 102nd Infantry, the 198th Coast Artillery, and the 1st Naval Construction Battalion. Over the course of the next 52 days, they unloaded 20,000 tons of supplies, establishing a vital fuel and supply base for ships crossing the Pacific. The base would remain open through World War II until it was officially closed 2 June 1946.in wikipedia

Following the loss of oil ships to German U-Boat attacks, Mexico declared war on Germany, Italy, and Japan on 22 May 1942. Along with Brazil, Mexico would be one of the only two independent Latin American countries to send troops abroad to fight in World War II. One of its most notable contributions was the 201st Fighter Squadron (the Aztec Eagles)—300 volunteers who fought with the United States against Japan in the Pacific.in wikipedia

In January 1942, Brazil allowed the US to set up air bases in the northeast of its territory in return for investment in its iron industry, agreeing to end diplomatic relations with the Axis Powers later that month. In response, German and Italian submarines targeted Brazilian shipping, prompting Brazil to declare war on those two countries in August 1942. Besides providing the Allies with bases and naval support, Brazil would later send an expeditionary force to fight in Italy in 1944.in wikipedia