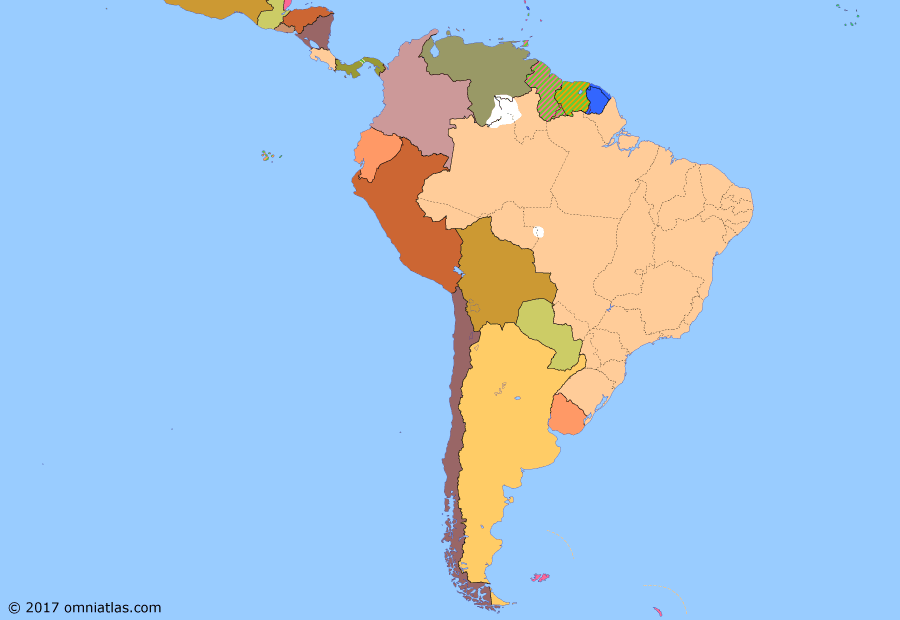 Brazil was the only South American country to send troops abroad during World War II and, despite US pressure, only Bolivia and Colombia had followed its lead in declaring war on the Axis powers by the end of 1944. Nonetheless, the demands of the War economically tied South America to the Allied cause. In 1945, the continent's remaining neutral nations entered the War, becoming charter members of the United Nations.

As part of their invasion of the Caucasus region of the Soviet Union, German and other Axis forces attempted to capture Stalingrad—a major city on the Volga River on the eastern edge of Europe. After the battle degenerated into street fighting, the Soviets mounted a counteroffensive which broke through the Axis lines and trapped the German 6th Army. The last German units surrendered in February 1943.in wikipedia

When France fell in 1940, the French territories in the West Indies remained in support of the pro-German Vichy regime. Most important was Martinique, which accepted much of France’s gold reserves and formed a safe haven for the remnants of the French fleet, including the aircraft carrier Béarn. Free French overthrew the Vichy government in French Guiana in March 1943, followed by Martinique, Guadeloupe, and St. Martin in July.in wikipedia

The Bolivian government of President Enrique Peñaranda declared war on the Axis powers of Germany, Italy, and Japan, entering World War II in support of the United States. In return the US provided military missions and aid, while the war saw a revival of Bolivia’s critical tin industry. Even so, Peñaranda’s failing domestic situation led to his overthrow by military officers in December 1943.in wikipedia

Five new federal territories were declared in the border regions of Brazil: Amapá was separated from Pará state; Rio Branco (later Roraima) and Guaporé (later Rondônia) from Amazonas; Ponta Porã from Mato Grosso; and Iguaçu from Paraná and Santa Catarina. While the first three territories would eventually become states, Ponta Porã and Iguaçu would last only three years before being terminated.in wikipedia

After ending diplomatic relations with the Axis powers in December 1941 and suffering a number of German U-boat attacks against its shipping in 1942-43, the Colombian government finally declared war on Germany in November 1943, entering World War II on the side of the Allies. Although it did not send its army overseas during the conflict, Colombia would cooperate with the United States against the U-boat threat in the Caribbean Sea.in wikipedia

After extensive aerial and naval bombardment, including the landing of 24,000 airborne troops, 156,000 US, British, and other Allied troops landed on the beaches of Normandy, German-occupied France, in the largest seaborne invasion in history. The landings began at 06:30 and met heavy fire from gun emplacements overlooking the beaches, along with numerous mines and obstacles. Over the day, the Allies suffered at least 10,000 casualties vs about 1,000 for the Germans, but secured their beachhead.in wikipedia

In 1942, the Ecuadorian government authorized the United States to establish naval and air bases on Baltra and Isabela Islands in the Galapagos in order to guard the Panama Canal. Despite this, Ecuador only entered World War II on the side of the Allies in February 1945, when it declared war on Germany and Japan.in wikipedia

Despite pro-fascists sympathies in the country—especially among his military officers—Paraguayan dictator and president, General Higinio Morínigo Martínez, broke relations with the Axis powers in 1942. However Paraguay continued to have close ties to pro-Axis Argentina and only declared war on Germany and Japan in February 1945.in wikipedia

Peru broke off diplomatic relations with the Axis powers in January 1942, but it was only in February 1945 that the nation declared war against Germany and Japan, entering World War II on the side of the Allies. Like many of the countries entering the war in 1945, the declaration was mainly undertaken in order to be accepted as a charter member of the United Nations.in wikipedia

Succumbing to economic and diplomatic pressure from the United States, Chile broke off relations with the Axis powers on 20 January 1943. Despite this Chile never declared war on Germany, only declaring war on Japan in February 1945.in wikipedia

Although it remained neutral for most of World War II, Venezuela generally supported the Allies, ending its diplomatic relations with the Axis powers on 31 December 1941. The war led to a boom in the Venezuelan oil industry, increasing the nation’s oil revenues by 358% between 1941 and 1947. However Allied fears that Venezuela’s entry into the war might provoke an Axis attack and disrupt its oil production meant that it was only in February 1945 that Venezuela finally declared war on Germany and Japan.in wikipedia

On 25 January 1942, Uruguay broke diplomatic relations with Germany, but remained neutral for most of the rest of World War II. In February 1945, it finally declared war on Germany and Japan, acceding to the Declaration of the United Nations.in wikipedia

Argentina remained sympathetic to Germany through most of World War II, only breaking relations with the Axis powers on 26 January 1944—the last of the South American countries to do so—after being threatened by both the United States and Brazil. Although the break in relations generated unrest in the military, Argentina eventually joined the Allies, declaring war on Germany and Japan in March 1945.in wikipedia