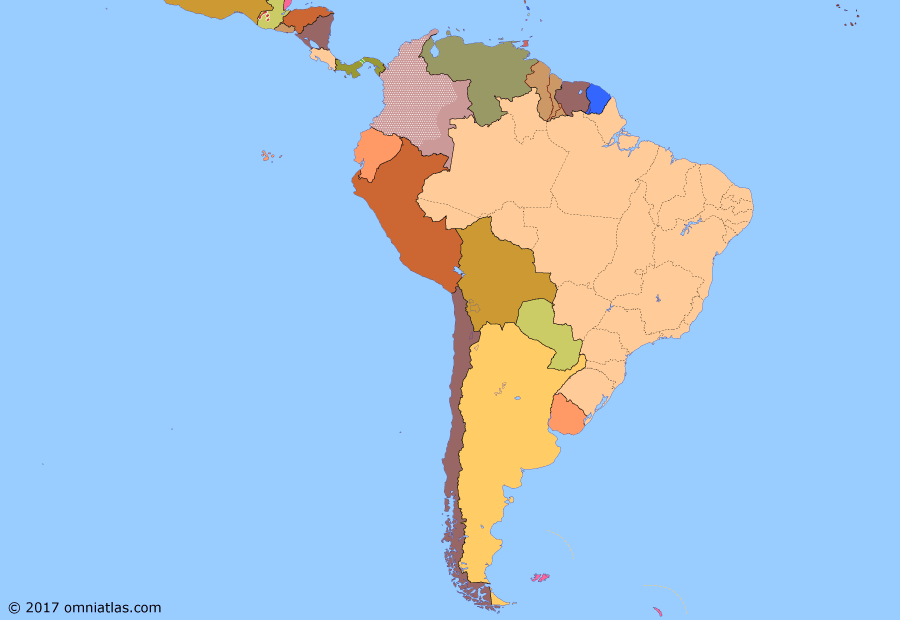 In response to the guerrilla movements of the 1960s and 1970s, the right-wing governments of southern South America organized Operation Condor, covertly agreeing to cooperate in the suppression of left-wing movements across the region. They were supported in this by the United States, which approved of their hostility to Communism, but their main interest lay in removing any opposition to their regimes.

The building of the Belém-Brasília Highway in 1958-60 gave farmers access to the Amazon Rainforest, but it was the paving of this route (1974) and the construction of highways into the interior (e.g. the Trans-Amazonian in 1972) which really opened up the rainforest to exploitation. In the following decades, the influx of cattle ranchers, soybean farmers, loggers, and others led to an acceleration in the deforestation of the Amazon Rainforest. Between 1970 and 2015, estimated forest cover in the Brazilian Amazon fell from 4,100,000 km² to 3,331,065 km², although the rate of deforestation has been slowing since 2004. in wikipedia

The Argentine military government conducted what it called the “Dirty War”—a campaign of state terrorism in which government forces and right-wing death squads hunted down political dissidents and anybody believed to be involved in leftist activities, ostensibly to destroy the guerrilla threat posed by groups like the Montoneros and People’s Revolutionary Army. Between the 1976 Argentine coup and the restoration of democratic government in 1983, about 30,000 people disappeared; perhaps a third of this number were guerrillas.in wikipedia

In an atmosphere of rising tensions between the right-controlled Congress of Chile and the Socialist government of President Salvador Allende, the Chilean Armed Forces seized control of most of the country in the morning of 11 September 1973; Allende held out until his death early that afternoon during a four-hour battle over the presidential palace (La Moneda). The coup d’état was welcomed by the United States under President Richard Nixon, which had been opposed to Allende and ordered economic warfare and CIA operations against him. In the wake of the coup, Army Chief Augusto Pinochet quickly rose to supreme power in Chile.in wikipedia

Following the 1973 Chilean coup, the Government Junta held power under the Chilean Army Commander-in-Chief, General Augusto Pinochet. Pinochet proclaimed himself President the following year, presiding over an oppressive regime that left over 3,000 dead or missing, tortured over 30,000, and drove some 200,000 Chileans into exile. In 1988, Pinochet, facing eroding support for his dictatorship, was defeated in a popular referendum and made to agree to open presidential elections. As a result he stepped down in 1990, but continued on as Commander-in-Chief of the Army until 1998.in wikipedia

In March 1967, the British colony of Grenada became a British associated state, gaining full control over its internal affairs. Grenada became a fully independent state on 7 February 1974, with Eric Gairy—Premier from August 1967—becoming the country’s first Prime Minister. Gairy would continue on to win Grenada’s first general election in 1976, but would be overthrown in a coup three years later.in wikipedia

After the 1974 Carnation Revolution in Portugal, the Portuguese government agreed to negotiate with the African Party for the Independence of Guinea and Cape Verde (PAIGC), which had been fighting for the end of Portuguese rule in those two countries. Cape Verde was granted independence on 5 July 1975, with nationalist leader Aristides Pereira as President. An initial desire to unite with Guinea-Bissau—which Portuguese Guinea became when it gained its own independence—ended in November 1980 when a coup toppled that nation’s government.in wikipedia

On 25 November 1975—Chilean dictator General Pinochet’s birthday—delegates from Argentina, Brazil, Bolivia, Chile, Paraguay, and Uruguay secretly met in Santiago, Chile. There they established Operation Condor—a clandestine agreement to cooperate in the monitoring and repression of their political opponents. With a joint information center at the DINA (Chilean secret police) headquarters in Santiago, Condor also received support from the United States and other Western nations until it was eventually closed down in the 1980s. The existence of Condor itself did not become public knowledge until 1992.in wikipedia

After negotiations beginning in 1973, the Dutch constituent country of Suriname became fully independent from the Netherlands as the Republic of Suriname. Despite a Dutch-instituted ten-year aid programme, roughly a third of the population emigrated prior to independence in the belief that the new nation would not be viable. Johan Ferrier became the first President, with Henck Arron as Prime Minister. Both would be overthrown in military coups in 1980.in wikipedia

In November 1976, a party of the Argentine Air Force landed on Southern Thule, part of the South Sandwich Islands and disputed between Argentina and the United Kingdom, and set up the military base of Corbeta Uruguay. The British discovered the base the next month and protested its presence, sending in a small naval task force. However, the British avoided a direct confrontation at the time, and it wasn’t until the end of the Falklands War that Royal Marines were landed and the Argentinians expelled from the island.in wikipedia

Following the murder of leftist political voice Pedro Joaquín Chamorro Cardenal on 10 January 1978 in Nicaragua, riots broke out against the dictatorial regime of Anastasio Somoza Debayle, believed to be behind the killing. On 22 August, the Sandinista National Liberation Front—the main opposition to Somoza—captured the National Palace while the legislature was in session, taking 2,000 hostages. Although the government agreed to pay for their release, revolts continued and on 17 July 1979 Somoza surrendered power to the Sandinistas.in wikipedia

On 28 January 1978, Argentina rejected a Court of Arbitration ruling on its dispute with Chile over the possession of Picton, Lennox, and Nueva islands in the Beagle Channel. In December of that year, it attempted to land forces to occupy the disputed islands, but aborted the invasion due to bad weather then called it off altogether. The disagreement was then brought before the Pope, whose ruling was eventually accepted by Argentina after its junta fell in 1983.in wikipedia

After eight years as a British associated state, Saint Lucia became fully independent and a member of the Commonwealth of Nations. John Compton—Premier since 1967—became the country’s first Prime Minister, only to be defeated in general elections later that year.in wikipedia