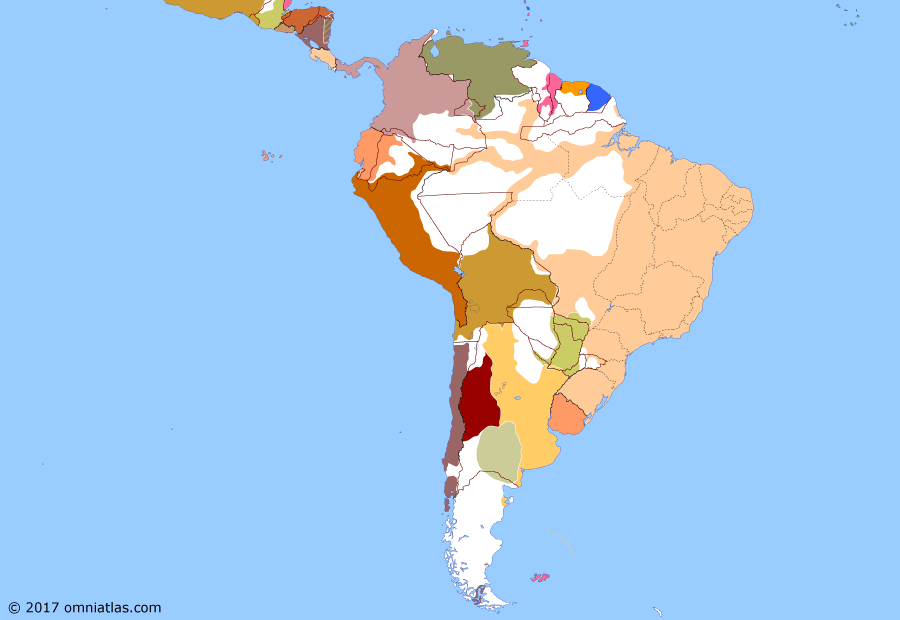 31 May 1866France withdraws from Mexico

In early 1866 the Triple Alliance of Brazil, Argentina, and Uruguay defeated the last Paraguayan forces in Argentina, successfully crossing the Paraná River into Paraguay itself in April. However, southern Paraguay was well protected by river fortifications and it would take another two years' fighting for the Allies to break through.

In a punitive action, Spanish Rear Admiral Casto Méndez Núñez bombarded the Chilean port of Valparaíso with 1 ironclad, 5 frigates, and 1 corvette. The attack ravaged the undefended city, destroying the port facilities and commercial premises, and sinking 33 Chilean ships for no casualties. The bombardment triggered an international scandal, with the Spanish condemned for attacking an unarmed town and the British navy criticized for not intervening to protect its nationals.in wikipedia

On 16 April 1866, supported by fire from an Allied river squadron, 10,000 Brazilian troops and 5,000 others advanced up the Paraguay River to disembark across the Paraná River in Paraguayan territory near Fort Itapirú and Paso de la Patria. Two days later, this force seized Fort Itapirú, allowing an additional 45,000 Allied troops to cross into Paraguay and defeat an initial Paraguayan counterattack at Estero Bellaco on 2 May.in wikipedia

The Spanish Pacific Fleet under Admiral Casto Méndez Núñez bombarded the major Peruvian port of Callao, killing hundreds of defenders but failing to inflict any significant damage on the fortifications. After reporting that they had silenced most of the Peruvian coastal batteries, the Spanish declared a victory and withdrew.in wikipedia

With no ports available south of Colombia, the Spanish abandoned the Chincha Islands and returned home with their fleet; two frigates—including the flagship Numancia—and a corvette traveling west to Cadiz via the Philippines, and the rest of the fleet traveling east into the Atlantic. Barring the seizure of a few ships en route, the departure effectively ended the Chincha Islands War. However, an armistice between Spain and the South American allies would only be signed in 1871 and it was only from 1879 to 1885 that formal peace treaties would be completed.in wikipedia

26,000 Paraguayan troops launched a preemptive assault on some 35,000 Brazilian, Argentine, and Uruguayan invaders massed outside Tuyutí in an attempt to defeat them before they can be reinforced by another 15,000 Brazilians marching inland. In one of the bloodiest battles in South American history, the Paraguayans fail to break through, suffering 6,000 killed and 7,000 wounded for 4,100 Allied casualties (including around 1,000 killed). Despite being its high cost for Paraguay, the battle did halt the Allied advance for several months.in wikipedia

On 22 January 1866, French Emperor Napoleon III—facing increasing domestic and international pressure to end the French campaign in Mexico—declared his Mexican intervention a success and began preparations for troop withdrawal. In late May and early June, French units were recalled from across Mexico to reassemble in Mexico City and embark from Veracruz. By February 1867, most of the remaining French, Austrian, and Belgian forces had departed for Europe, leaving Emperor Maximilian of Mexico greatly weakened.in wikipedia

The Chilean Foreign Affairs Minister, Alvaro Covarrubias, and the Bolivian Plenipotentiary in Santiago, Juan R. Muñoz Cabrera, signed the Boundary Treaty of 1866 between Chile and Bolivia—or Mutual Benefits Treaty—in Santiago de Chile. The treaty defined the border between both countries at the 24° South parallel, running from the Pacific Ocean to the eastern border of Chile, and created a zone of bipartite tax collection (the “Mutual Benefits zone”). However, ambiguities in the treaty only led to increased tensions between the two countries and it would take another 8 years of negotiations before a revised version of the treaty could be agreed upon.in wikipedia

Upon defeating the Paraguayans at Curuzú on 3 September 1866, the Allies advanced northeast to tackle the Paraguayan trenches at Curupaytí—held by 5,000 men and 49 guns under General José E. Díaz. Following a morning river bombardment, the Allies mounted a noon assault with 10,000 Brazilian and 5,000 Argentine troops but were met by a barrage of artillery fire which felled over 4,000 men in the first two hours for the loss of only 92 Paraguayans. Unable to sustain such casualties, the Allies called off the attack. It would be another ten months before they would resume their offensive into Paraguay.in wikipedia

In November 1866, recruits destined for Paraguay mutinied in Mendoza, western Argentina; the revolt soon became a general uprising under the leadership of General Juan Saá and his brother Felipe, supported by Colonels Juan de Dios Videla and Felipe Varela. The rebels scored several victories before a government offensive dispersed them in March and April 1867. Nonetheless, Varela remained at large until forced into exile in Bolivia in August (and would mount further raids back into Argentina until January 1869).in wikipedia