LATEST:   Battle of the Bidassoa   Start of the Vitoria Campaign   Sixth Coalition • Division of the Roman Empire 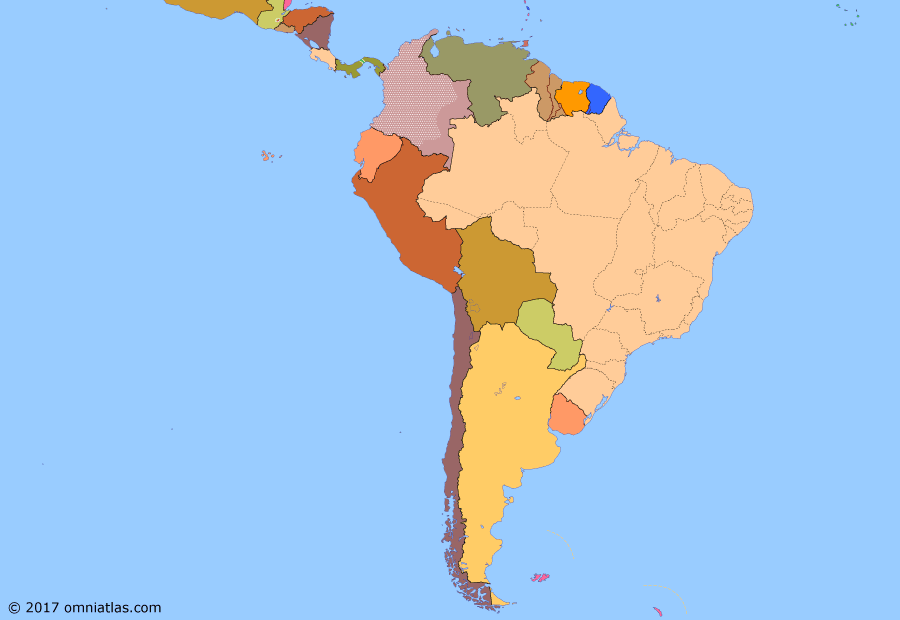 May 1964Colombian conflict
begins with gov.
attack on Marquetalia

The success of the Cuban Revolution inspired revolts and left-wing insurgencies across the Americas. However, most of these movements lacked widespread popular support and were suppressed within a decade. A major exception was in Colombia, where a government attempt to crush Communist enclaves left after the 1948-58 civil war marked the beginning of more than fifty years of armed conflict.

After a Panamanian flag was torn in a clash between pro-US Zonians and Panamanian nationalists, Panamanian crowds began rioting on the border between Panama City and the Canal Zone. The protesters overwhelmed the Canal Zone police, forcing the US Army to step in. After three days fighting, and the deaths of some 22 Panamanians and four US soldiers, order was restored. The incident would be a significant factor in the US return of the Canal Zone in 1977, with 9 January becoming memorialized as Martyr’s Day in Panama.in wikipedia

In an attempt to suppress Communist enclaves which had formed in the mountains west of Bogotá in the wake of La Violencia, the Colombian government launched Operation Sovereignty. By late June, the military had suppressed the communal Republic of Marquetalia and dispersed the neighboring enclaves. However, most of the rebels escaped, later forming the Revolutionary Armed Forces of Colombia (FARC), and the Colombian conflict would continue into the 2010s.in wikipedia

Following the United States’s intervention in the Dominican Republic, the country was temporarily administered by the Inter-American Peace Force (IAPF), established by the Organization of American States. On 28 May 1965, as US troops began their withdrawal, Brazil took over leadership of the force, remaining in charge until September 1966.in wikipedia

The National Liberation Movement-Tupamaros (MLN-T)—a radical left-wing movement—launched urban guerrilla attacks in Uruguay, beginning by bombing the Brazilian embassy. After being suppressed by the police in 1966, the movement reasserted itself in 1968-72 before being crushed by the army. The conflict left Uruguay open to a military coup in 1973, with liberal democracy not being restored until 1985.in wikipedia

British Guiana became independent from the United Kingdom as the Commonwealth Realm of Guyana. Its first Prime Minister would be Forbes Burnham, a nationalist who would remain in power until his death in 1985.in wikipedia

On 3 November 1966, Che Guevara—Argentine revolutionary and a hero of the Cuban Revolution—entered Bolivia under a pseudonym, heading for the countryside to organize a foco to overthrow the military government of President René Barrientos. By 1967, Guevara had assembled a band of 29 Bolivians, 25 Cubans, and a few others, but failed to gain much local support. On 8 October, 1,800 Bolivian soldiers located and surrounded his encampment, capturing Guevara and executing him the following day.in wikipedia

The self-governing British colony of Barbados became an independent state and member of the Commonwealth of Nations, joining the United Nations and Organization of American States the following year. Errol Barrow—premier of the country from 1961—continued on to become first Prime Minister from 1966-76.in wikipedia

On 26 June 1969, following rising tensions between the two countries, aggravated by rioting over football matches in which they faced each other to qualify for the 1970 FIFA World Cup, El Salvador ended its diplomatic relations with Honduras. Some weeks later, on 14 July, the Salvadoran Air Force attacked targets in Honduras while the Salvadoran Army crossed the border, capturing Nueva Ocotepeque on the 15th. However, the Hondurans soon stalled the Salvadoran offensive and the Organization of American States arranged a ceasefire, bringing combat to an end after just four days.in wikipedia

In May 1970, Pedro Aramburu—president of Argentina 1955-58—was kidnapped and murdered by the Argentine left-wing urban guerrilla group Montoneros as a first move in their effort to destabilize the country. Montoneros continued their campaign of bombings and assassinations throughout the 1970s, reconciling with the government only when the two sides found common cause in the Falklands War in 1982.in wikipedia

The People’s Revolutionary Army (Ejército Revolucionario del Pueblo or ERP) launched an urban guerrilla war in Argentina, kidnapping and/or assassinating high profile figures. After Juan Perón returned to the presidency in 1973, the ERP shifted its strategy to securing territory in the impoverished Andean highland province of Tucumán. Threatened by this move, the government sent in the army in early 1975, completely eradicating the guerrilla threat by the end of 1977.in wikipedia