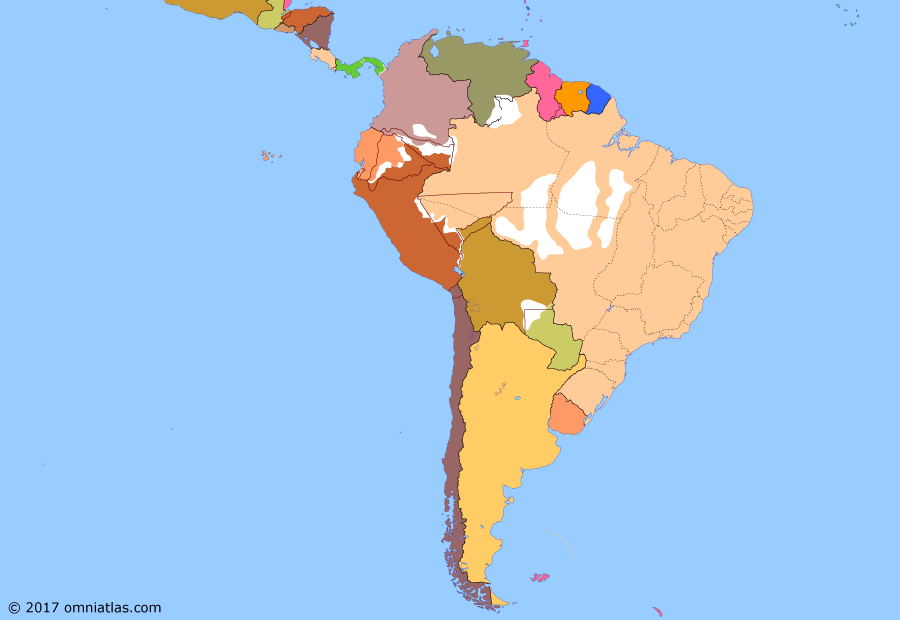 Border disputes and the Powers

The scramble for resources, especially rubber, in the South American interior in the late 19th and early 20th centuries saw a flurry of border settlements as the nations of the continent attempted to make the most of their old and conflicting claims without risking costly wars. Most successful was Brazil, which, thanks in large part to the diplomacy of the Baron of Rio Branco, consolidated its frontiers by negotiating numerous favorable treaties between 1895 and 1909.

Brazil and Bolivia signed the Treaty of Petrópolis, ending their dispute over the then-Bolivian territory of Acre. By the terms of the treaty—drafted by Brazilian foreign affairs minister José Paranhos, Baron of Rio Branco—Bolivia ceded Acre to Brazil in return for a tract of Brazilian territory between the Abunâ and Madeira rivers, a monetary payment of two million British pounds, and a pledge to build the Madeira-Mamoré Railway to connect Bolivia to the Amazon. Acre would be formally incorporated into Brazil on 25 February 1904, becoming a federal territory on 7 April.in wikipedia

Philippe-Jean Bunau-Varilla, the French diplomatic representative of Panama, and United States Secretary of State John Hay signed the Hay-Bunau-Varilla Treaty, establishing the Panama Canal Zone. The treaty allowed the US to begin construction of the Panama Canal; in return, they agreed to pay Panama $10 million plus an annual rental payment of $250,000.in wikipedia

José Paranhos, Baron of Rio Branco and representative of Brazil, signed the Tobar-Rio Branco Treaty with Ecuadorian representative, Dr. Carlos Tobar, in Rio de Janeiro, Brazil. By the terms of the treaty, Ecuador renounced its old claims to the area between the Caquetá/Japurá and Amazon rivers, in return for Brazil’s friendship and rights to free navigation.in wikipedia

A dispute between Brazil and British Guiana over a block of territory surrounded by the Pakaraima Mountains and the Cotingo, Takutu, and Ireng rivers was resolved by the arbitration of King Victor Emmanuel III of Italy, who awarded the territory to Brazil.in wikipedia

Bolivia and Chile signed the Treaty of Peace and Friendship in Santiago de Chile, formally making peace after the 1878-84 War of the Pacific. By the terms of the treaty, Bolivia recognized Chilean sovereignty over the coastal territories the latter had seized during the war and the boundary between the two countries was agreed. In return, Chile recognized the right of Bolivia to commercial transit through its territories and ports.in wikipedia

In 1906, the Mexican government attempted to colonize Clipperton Island in conjunction with the British Pacific Islands Company, with the intent of mining guano. Finding only low-quality guano, the company ended its operations in 1908; the colonists were further isolated when their supply ship—the Tampico—was captured by Mexican revolutionaries in 1914. After facing famine and scurvy, most of the remaining men drowned in an attempt to get help in October 1916, leaving the lighthouse keeper alone with 15 women and children. He took advantage of the situation to institute a reign of terror, but was killed by one of his victims just before the survivors were rescued by the USS Yorktown in July 1917.in wikipedia

Under the mediation of Argentina, Paraguay and Bolivia signed the Pinilla-Soler Treaty to submit their dispute over the Chaco region to arbitration. After repeated extensions and failures to ratify the agreement, the treaty lapsed in June 1918.in wikipedia

Nicaragua’s dictator José Santos Zelaya invaded Honduras in support of Honduran insurgents, destroying a combined Honduran-Salvadoran army with machine guns (the first usage of those of those weapons in Central America). The Nicaraguans soon entered Tegucigalpa, prompting Honduran President Manuel Bonilla to flee to the Pacific port of Amapala, where he gained refuge aboard the USS Chicago. The United States intervened to arrange a final peace settlement, pushing Zelaya to accept a compromise regime under General Miguel Dávila.in wikipedia

The Treaty of Bogotá was signed in Bogotá, Colombia, between the Minister of Foreign Affairs of Colombia, Alfredo Vásquez Cobo, and Brazilian representative, Enéas Martins. The treaty established the Brazil-Colombia border from the Rio Negro northwestward along the Amazon-Orinoco watershed divide, “then generally southward along various river courses and straight-line segments to the mouth of the Apaporis River”. Ratifications were exchanged in Rio de Janeiro on 20 April 1908.in wikipedia

By the order of the United States President Theodore Roosevelt, the Great White Fleet left Hampton Roads, Virginia, on a journey to circumnavigate the world and demonstrate US naval power. The 16 battleship fleet traveled south to the British West Indies, rounding South America to reach San Francisco on 6 May 1908; then crossed the Pacific via Honolulu to visit New Zealand, Australia, the Philippines, and Japan before sailing back to Hampton Roads via Ceylon, the Suez Canal, Gibraltar, and the Atlantic. The voyage was completed without major incident and welcomed in the numerous ports it visited, greatly enhancing US prestige.in wikipedia

The launch of the Brazilian battleship Minas Geraes in Britain made Brazil one of the first countries to possess a dreadnought, preceded only by Britain and the United States. Concerned that this single Brazilian warship could destroy their combined fleets, Argentina and Chile ordered their own dreadnoughts from the British. This naval arms race ended when the outbreak of World War I ended the possibility of purchasing more warships.in wikipedia

In 1908, growing economic tensions between Venezuelan President Cipriano Castro and the foreign powers culminated in Castro placing a virtual ban on foreign shipping to Venezuelan ports. In response to pleas from their merchants in Curaçao—and with the acquiescence of the United States—the Netherlands sent a squadron of coastal defence ship Jacob van Heemskerck and two protected cruisers to blockade Venezuela. The conflict ended when Castro left for Europe for medical treatment and was deposed in absentia by Vice President Juan Gomez.in wikipedia