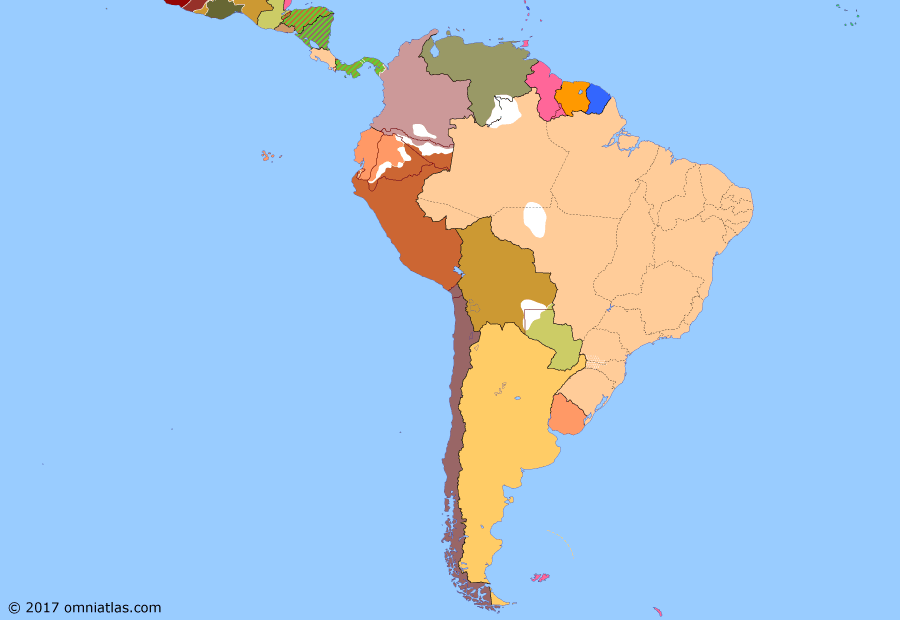 Mar 1911US protectorate
over Honduras

Aug–Dec 1912US occupation
of Nicaragua

Jul 1914Outbreak of World War I

Border disputes and the Powers

Opening of the Panama Canal

After ten years construction, the Panama Canal was opened in 1914, connecting the Atlantic to the Pacific via the Caribbean and effectively changing the geography of the Americas. Central America and northern South America gained a new strategic importance from their proximity to the canal, while the rich southern nations of Argentina and Chile faced economic downturn as maritime traffic around Cape Horn fell.

Peru and Brazil signed the Treaty of Rio de Janeiro, defining their mutual frontier south of the Yuvari River. By the terms of the treaty, Peru agreed to cede its extensive claims over Acre and part of Amazonas to Brazil.in wikipedia

The Minister Plenipotentiary of Peru, Dr. Solón Polo, and the Minister of Foreign Affairs of Bolivia, Daniel Sánchez-Bustamante, signed the Treaty of Rectification of Borders in La Paz, Bolivia. The treaty delimited the Peru-Bolivia border line to the north of the River Suches on Lake Titicaca, putting an end to the territorial dispute between the two countries.in wikipedia

After Nicaraguan President José Santos Zelaya ordered the execution of two Americans accused of collaborating with Juan José Estrada’s rebel forces in December 1909, the United States severed relations with Nicaragua. On 12 December, the US landed marines in the country, pressuring the resignation of President José Santos Zelaya two days later. US forces remained in Nicaragua until August 1910, when Estrada—the former rebel and their preferred candidate—was elected president in place of Zelaya’s successor.in wikipedia

Francisco Madero crossed from Texas into Mexico, calling for revolt against President Porfirio Díaz—who had just been proclaimed for his eighth term as president despite increasing resentment against the 80-year-old’s long rule. Although Madero’s initial attempt at taking Ciudad Porfirio Díaz (now Piedra Negras, Coahuila) was driven back, it was followed the following day (20 November) by several uprisings across the country. Most important was in Chihuahua state, where Madero supporter Pascual Orozco seized control of the federal outpost of Ciudad Guerrero. The Mexican Revolution had begun.in wikipedia

Following the excessive whipping of an Afro-Brazilian sailor, a mutiny broke out on aboard the new Brazilian dreadnought Minas Geraes, whose crew, like most ships in the Brazilian navy at the time, largely consisted of mulattoes and former slaves under white officers. The rebellion soon spread to other warships in Rio de Janeiro harbor, including Brazil’s only other dreadnought, São Paulo, and the new cruiser Bahia. After some debate, the Brazilian authorities realized that it might be impossible to retake the ships by force and accepted the rebel’s demands of better working conditions and an amnesty.in wikipedia

In 1911, former Honduran president Manuel Bonilla led an insurrection against sitting President Miguel Davila, further undermining the ex-general’s government and disrupting payments of Honduras’s considerable debt. In response, the United States Marines landed in the country, ordering a ceasefire and persuading both sides to meet aboard the USS Marietta. After negotiations, the two parties agreed to a US-selected provisional president, who would resign in a year in favor of Bonilla.in wikipedia

In early 1911, Colombian expeditions established a fortified settlement at La Pedrera on the Caquetá River near the border with Brazil and in territory disputed with Peru. Peru responded by sending its own force to the region, backed by river gunboats. After several days fighting, the Colombians retreated, in part because malaria and yellow fever had taken its toll on their ranks. The Peruvians occupied the post, holding it until December, when disease forced them too to abandon the settlement.in wikipedia

Global demand for Amazon rubber was undercut by the success of more efficient rubber plantations in Malaya, Ceylon, and Africa, leading to economic stagnation in the Amazon region. Symbolic of this decline was the rubber boom-motivated Madeira–Mamoré Railroad, which was begun in 1907 and completed in 1912—by which the time the boom had ended. The railroad notoriously cost the lives of some 6,000 workers; just one example of the tens of thousands—including many indigenous people—who died during the boom.in wikipedia

In mid-1912, Nicaraguan Minister of War General Luis Mena rebelled against President Adolfo Díaz when the United States refused to recognize Mena as Díaz’s successor. On Díaz’s invitation, the US landed troops in Nicaragua on 4 August to protect US citizens and safeguard US property. After capturing Mena in September and defeating his remaining followers in October, the troops supervised Nicaragua’s elections in November before withdrawing.in wikipedia

The Brazilian government supported landowners in their conflict with settlers in the Contestado—an inland region that was contested by the states of Paraná and Santa Catarina as well as Argentina. The sporadic guerrilla war led to some 5,000-9,000 casualties and ended in government victory.in wikipedia

The Austro-Hungarian Empire declared war on the Kingdom of Serbia, in response to Serbia’s rejection of Austria-Hungary’s July Ultimatum. In the following days, Russia, Germany, France, and Britain all entered the conflict, resulting in the First World War.in wikipedia

Soon after the outbreak of World War I, Germany established a secret naval base off Trindade—a remote and inhospitable Brazilian island. On 14 September, the base was discovered by the British armed merchant cruiser HMS Carmania when it sighted the German auxiliary cruiser and merchant raider, SMS Cap Trafalgar there; ironically the Cap Trafalgar was disguised as the Carmania. After a two hour battle, the Cap Trafalgar was sunk and its 279 surviving crew captured.in wikipedia

After a seven-year construction, at the cost of about $375 million and the death of some 5,600 workers, the Panama Canal was formally opened. The Panama Railway steamship SS Ancon making the first official transit. Large celebrations which had been planned for the canal’s opening were canceled due to the outbreak of World War I, making the opening into a modest local affair.in wikipedia